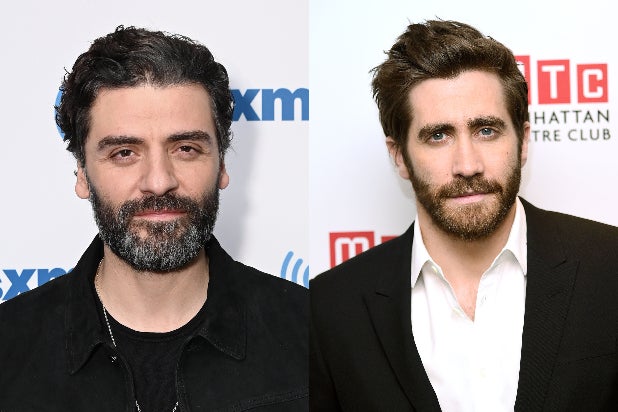 Oscar Isaac and Jake Gyllenhaal are set to play Francis Ford Coppola and producer Robert Evans in a film directed by Barry Levinson about the making of Coppola’s 1972 masterpiece “The Godfather.”

The film “Francis and The Godfather” is based on a Black List script by Andrew Farotte that has been redeveloped with Levinson and dives into how dives into how Coppola and Paramount head Evans studio had very different movies in mind in the process that led to making the film based on Mario Puzo’s book.

And of course there’s a well-documented saga about the long road it took to actually making an all time great saga, including the gamble of casting an increasingly unpredictable and unreliable Marlon Brando and finding a relatively unproven lead in Al Pacino. Despite all the butting heads and egos, the film stands as one of the greatest movies of all time and won three Oscars, including Best Picture.

“Out of the madness of production, and against all odds, a classic film happened,” Levinson said in a statement.

“Any movie that Barry Levinson makes about anything, will be interesting and worthwhile,” Coppola himself added in a statement.

Also Read: CBS All Access to Be Renamed Paramount+ in Early 2021, Add Scripted Series on Making of 'Godfather'

“Here was a young man who lived outside the system and every step of the way the system was telling him, ‘You can’t do that.’ But Francis never gave up on his vision and the result speaks for itself,” Marcus said in a statement.

Though “The Godfather” has never gone out of style, the film has attracted some renewed interest of late. Coppola is actually releasing a director’s cut of “The Godfather Part III” as well as a restored version of the film’s original theatrical release, and a limited series is in the works called “The Offer” for CBS All Access (soon to be Paramount+) that will also look at the movie history behind the making of “The Godfather.”

Gyllenhaal will next star in a remake of the foreign film “The Guilty” for Netflix along with director Antoine Fuqua, which his Nine Stories production company will also produce. Gyllenhaal is represented at WME and Goodman, Genow, Schenkman, Smelkinson & Christopher.

Isaac will next be seen in “Dune,” and he recently wrapped shooting on Paul Schrader’s “The Card Counter.” He’s also attached to star in and produce the Lionsgate film “London” with Ben Stiller directing. He’ll also star in and produce the adaptation of Brian K. Vaughn’s “Ex Machina” comic re-titled “The Great Machine.” Isaac is represented by WME, Inspire Entertainment, and attorney Mitch Smelkinson.