Is it now inevitable that “The Hurt Locker” will be named Best Picture at the Kodak Theater on March 7?

Looking at the numbers, and at the results of every awards show, guild contest and critics group now that all the major Oscar precursors have chimed in, you could certainly make that argument. 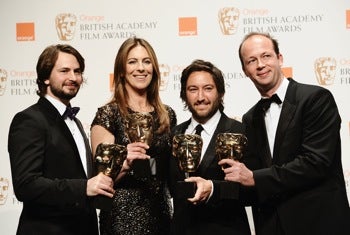 “The Hurt Locker” won the Best Film award from the British Academy of Film and Television Arts on Sunday (left). The day before, it won the Best Original Screenplay honor given out by the Writers Guild.
Before that, Kathryn Bigelow won the top award from the Directors Guild. And the film won at the Producers Guild Awards. And the American Cinema Editors’ Eddie Awards.
No film has ever won all of those without winning the Oscar for Best Picture.
In fact, you don’t even have to include BAFTA and the PGA in the calculations; as David Hanks has pointed out, no film has ever won the DGA, WGA and ACE awards without winning Best Picture.
And if Oscar voters are the slightest bit inclined to pay attention to the critics, "Hurt Locker" has far outpaced itsrunner-up, "Up in the Air," in critics awards.
Its signs of weakness are few and far between. 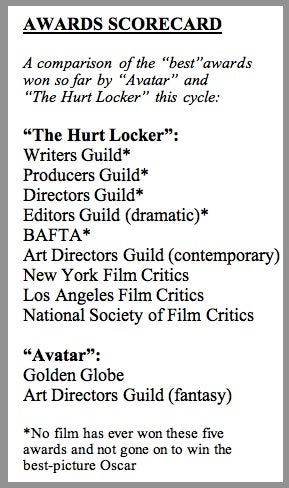 Yes, “Avatar” beat “The Hurt Locker” head-to-head at the Golden Globe Awards, which is meaningless as an indication of Academy thinking, and at the Motion Picture Sound Editors awards, which at best may represent the thinking of the 405-member sound branch of the 5,777-member Academy.
True, “Inglourious Basterds” landed the Screen Actors Guild ensemble award, which was also won by previous upset Oscar winners “Shakespeare in Love” and “Crash.” But with a small cast and no budget to send out screeners to the 100,000-member guild, “Hurt Locker” was always a SAG longshot at best.
Still to come are the Costume Designers Guild (February 25), the American Society of Cinematographers and
the Cinema Audio Society (February 27) and the Visual Effects Society (February 28). None has the potential to alter the race in any significant way.
So, once again … Is it over?
I would say that things are looking very, very good for Bigelow and crew. I don’t think that anything else has the across-the-board support that “Hurt Locker” does. I expect to see her, and her film, onstage a lot on Oscar night.
But no, I wouldn’t dare say it’s over.
“Avatar” would be beating all the odds if it won; no film has been named Best Picture without a single acting or writing nomination since “Grand Hotel” in 1931-32, when the makeup of the Academy was so dramatically different as to make precedent meaningless.
But “Avatar” has already beaten all the
odds at the boxoffice, and it’s picked up a good chunk of voters who view it as such a transformative, groundbreaking experience that it’d be crazy to vote for anything else.
“Avatar” is the reason the Oscar show will 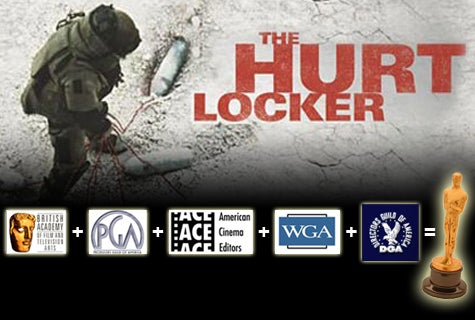 see its ratings increase dramatically, and Academy voters know that.
All of which makes “Avatar” the film that could possibly, conceivably throw the usual rules out the window and grab a win that hasn’t been indicated at any of the significant precursor awards.
I don’t believe it will. I look at all the other awards and see unmistakable indications that the people who decide these things think that “The Hurt Locker” is the best picture of the year.
I think “The Hurt Locker” will win. I think it deserves to win.  And I think that win will be extraordinarily popular within the Kodak Theater in two weeks.
But over? Even after the events of the weekend, I can’t go there.
Not yet, anyway.
(BAFTA photo of Mark Boal, Kathryn Bigelow, Greg Shapiro and Nicolas Chartier by Ian Gavan/Getty Images)