The Oscars are nearly here and the race is still up in the air. The chatter in, around and after the Independent Spirit awards on Saturday was how the vote might split for the Oscars on the morrow. 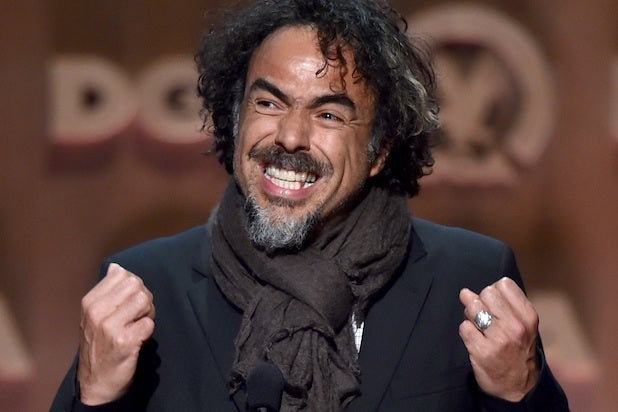 So goes the conversation.

Surprisingly, this year the two high-minded and well-made British films – “The Imitation Game” and “The Theory of Everything” – have fallen out of the Best Picture conversation. Were they too similar? Too remote? Hard to say.

Instead two quintessentially American stories – one a slow-paced, longitudinal drama of an ordinary family, the other a nerve-jangling, fast-running New York theatrical experience in a single take – are in the cross-hairs.

Which one is more likely to win? Which more deserving?

For what it’s worth, Linklater missed the Spirit Awards ceremony (to be with his family on Saturday, I was told), so Ethan Hawke accepted the statue for him and gave an eloquent speech about the film being “a little flare gun…for anybody that has a radical vision.” Well put.

Similarly, when Inarritu took the stage for Best Director, he hailed the virtues of being “bold” in filmmaking.

Both “Boyhood” and “Birdman” are extremely bold films, though in entirely different ways. They are worthy of celebration because of how they push the boundaries of the form, but also because the storytelling is so satisfying.

Making a movie over 12 years, as “Boyhood” was, takes a boldness of vision and an unusual patience, uncommon faith and stubborn persistence. Patricia Arquette, accepting her award for Best Actress, went out of her way to thank distributor IFC and its chief Jonathan Sehring, for being brave enough to make the film.

Also Read: 13 Things You Didn’t See on TV at the Indie Spirit Awards

But “Birdman” is equally bold in its way. I remember Inarritu told TheWrap at our screening series that he went to lunch with the legendary director Mike Nichols (who recently passed) and described his intent to make the film in a single take. Nichols told him he was completely insane. Inarritu recounts this story as a badge of honor – who would make a movie after Mike Nichols told him it was impossible? Inarritu not only dared, but succeeded brilliantly.

At the Spirit Awards, I got to talk to all the filmmakers as well as the prognosticators, and one thing is for certain: the executives at Fox Searchlight and IFC understandably have butterflies in their stomachs. Producer Arnon Milchan paced around his table, while Nancy Utley and Stephen Gilula looked like nervous parents a day before the wedding.

IFC Films President Sehring, meanwhile, told me he’s busy trying to quiet the voices in his head. He is counting his blessings because after all, “Boyhood” debuted over a year ago. Who could have guessed it would be this close to Best Picture?

It’s a toss-up. But one theory I heard on Saturday may be worth considering: when given the choice between a big drama and a story about themselves – about Hollywood and actors and production – the members of the Academy of Motion Picture Arts and Sciences turn their votes inward.

That would explain a win for “The Artist” over “The Descendants,” for “Argo” over “Zero Dark Thirty.”

And if it goes that way on Sunday, it could explain “Birdman” over “Boyhood.” Stay tuned.