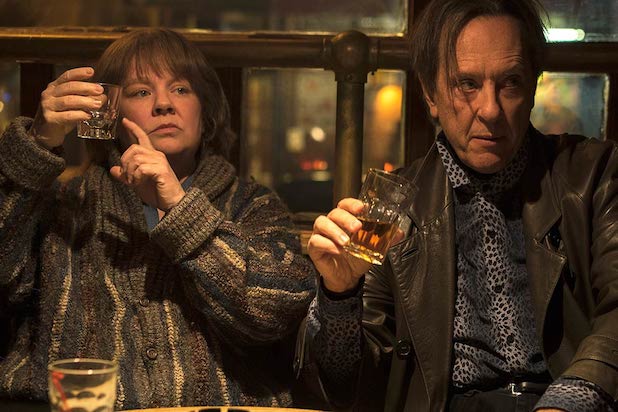 Dating all the way back to his breakout role in the British cult film “Withnail & I,” Richard E. Grant has appeared in classics like “The Player,” “The Age of Innocence,” “Bram Stoker’s Dracula” and “Gosford Park,” not to mention parts in “Game of Thrones” and “Girls.”

But his Oscar nomination Tuesday morning for “Can You Ever Forgive Me?” is his first Academy nod despite his long career.

“I’m over 62 years old, I’ve never been nominated for anything in my life. So far for this thing I’ve had 21 awards, so getting this nomination, it’s the cherry on top of the whole thing,” Grant told TheWrap. “Usually actors — by the time they get to my age — the parts have diminished, so whatever recognition you have is amazing.”

There’s plenty more recognition to come because coming up next Grant has got a part in “Star Wars: Episode IX.” And no, he couldn’t tell us who he’s playing in the film. He isn’t even allowed to tell his family.

“I will enjoy it for as long as it lasts,” Grant said. “The day that you get nominated is the best possible day, because there’s all possibility ahead of you. I’m enjoying it for every moment that it’s offered.”

But Grant says he owes this performance both to Melissa McCarthy, who was also nominated for Best Actress, and to his director Marielle Heller.

“She’s incredibly open, collaborative, encouraging and non-judgmental, and yet you know exactly who’s in charge on the whole operation,” Grant said. “Because she was a former actor, she understands what the whole process is. She made us all feel like whatever we did, she would look after us. That sounds like such a simple thing, but the number of directors who don’t achieve that, in my experience, are longer than the ones that do.”

And asked what he thought about the Oscars shutting out female directors like Heller from this year’s crop of Best Director nominees, Grant said he was “shocked more than surprised” considering the energy around the #MeToo movement.

“How do you get a Best Actress nomination, Best Supporting Actor nomination without the director? That’s who directed us,” he said. “She is so generous and feels so thrilled that her work has been nominated through us without her name actually being on it.”