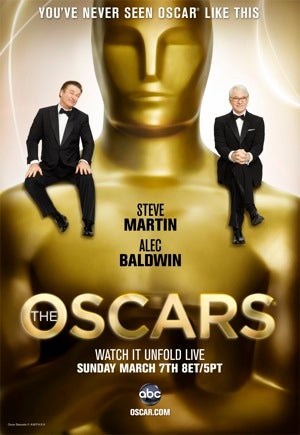 The tagline for this year’s Academy Awards show is "You’ve never seen Oscar like this" — and the show’s official poster, which was unveiled by the Academy on Monday, is certainly in keeping with that motto.

Where most Oscar posters rely on little more than the Oscar statuette graphically, and aim to be grand and striking, as befits the pomp and circumstance that surrounds the show, this year’s poster is downright playful and silly.

Although producer Joe Roth used the image of an illustrated old-style paparazzo shooting the Oscar statue in his poster for the 76th Oscar show, most Oscar posters do not depict people.

In fact, the ones that do include real figures tend to go with classic images, not participants in the upcoming show — such as the poster in 2006, which used black-and-white photos of movie stars holding the Oscars they’d just won, cropped so you couldn’t tell whose hands you were seeing.

Obviously, though, the Academy, ABC and producers Bill Mechanic and Adam Shankman look at Martin and Baldwin as a big selling point of this year’s ceremony, and they want to established a looser vibe.

And, let’s face it, they’d probably draw more viewers if they could have painted Oscar blue and morphed his face into a Na’vi, but that might be construed as showing a big too much favoritism for one nominee.

Clearly, though, the pressure is now increasing to score a big rating with the show.  Between the Grammys big ratings, the Golden Globes’ 14 percent jump over the previous year, and the Super Bowl’s record-breaking audience, the Oscars need to see a significant jump in their audience to keep pace with the other big events.

Oscar posters, designed by the Los Angeles-based creative shop Omelet, are for sale at the Oscar website.  And, no doubt, they’re soon to be seen on a billboard or at a bus stop near you.