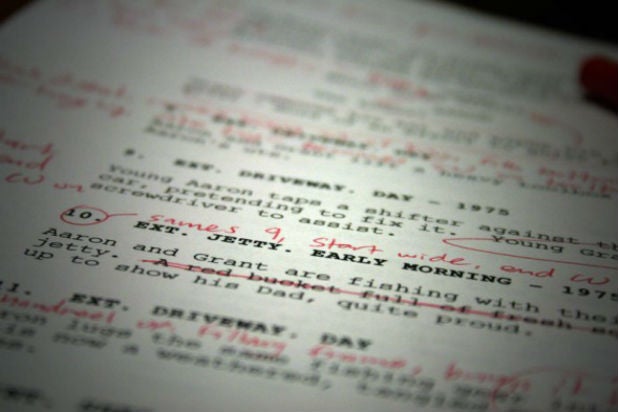 You might think a screenwriter who gets an Oscar nomination would be exempt from “notes” — the heavy-handed suggestions given by studio executives, producers and sometimes actors in the process of developing and shooting a film.

And Damien Chazelle said he was asked to scrap the climactic drum solo in his first feature, “Whiplash.”

Here are some of the most revealing stories from this year’s other writing nominees at the Audi-sponsored event.

Eric Heisserer (“Arrival”)
“It was the start of a pitch, I said ‘There’s a spy and his wife.’ The executive said, ‘There is no wife. Continue.'”

Barry Jenkins (“Moonlight”)
“So, where are the white people?”
[Note: Heisserer jumped in and said, “In the audience.” He got a big laugh.]

Damien Chazelle (“La La Land”)
“It was on ‘Whiplash,’ it ends with a kind of long drum solo, which was the whole point of making the movie. And the note was to get rid of all that. The note was written out — ‘He’s good at drumming. We get it.'”

Allison Schroeder (“Hidden Figures”)
“I was really excited, I was pitching this thriller with two female leads, about espionage. [The executive] said, ‘Oh! We love it! It’s great. Can you either change it to incest or two men? I said, ‘If you’ll really hire me? Yes.'”

Theodore Melfi (“Hidden Figures”)
“Most of the notes you get are from actors. They’re bad. This one studio [Fox Searchlight] person said, ‘Do we have to have so much math?’ So I pretended to be interested but, no, it’s about math. And then Kevin Costner calls me one night and says, ‘I’ve been thinking about a receding hairline.’

“I said, ‘OK. Why?’ He said, ‘I just think this guy would have a receding hairline.’ And so I call the studio because I love to torture them, and said, ‘Kevin Costner wants a receding hairline,’ and they flip out, saying ‘We want Kevin Coster just the way he is!’ So I went back to Kevin and said everyone at the the studio thinks it will make you look old. He went, ‘Oh. Can I chew gum?'”

Kenneth Lonergan (“Manchester by the Sea”)
“I’m trying to think of a really bad note that I’ve gotten, but for the past 20 years when executives give me notes I go into a kind of self-induced hypnotic trance in which I just nod and say… ‘Oh that’s interesting.’ I pitched a comedy once and someone said, ‘Where’s the fun?’ I said I didn’t know.”

Taylor Sheridan (“Hell or High Water”)
“I’m with [Lonergan]. When I start getting notes, it just starts to sound like the teacher from the Peanuts cartoon. I was in a meeting, I wrote this pilot for AMC, and we’re all sitting there and they’re giving me all their notes and I’m listening and at one point I say, ‘What the f— are you people talking about?”

And they said, ‘Taylor, you have to look for the note within the note.”  I said, ‘OK, but why don’t you just give me the note?’ They looked at me dead seriously and said, ‘Well we don’t know what the note is.'”

Todd Black (producer of “Fences”)
“We made a Western called ‘The Magnificent Seven’ [with Sony Pictures]. And the biggest note in development and shooting it was, ‘Do they have to wear cowboy hats and have facial hair?’ And I said, ‘Do you not want them not to have horses either?’ That was a huge note on a daily basis.”