The documentary shorts on this year’s Oscar shortlist include one Oscar winning director (Ross Kaufmann of “What Will Sophia Loren Do?”) and the animated shorts include films made by Pixar and DreamWorks Animation. But the real heavy hitters are congregating in the Best Live Action Short category, which is an impressive collection of films with some unexpected star power.

The 10 films on that category’s shortlist include one directed by Pedro Almodóvar and starring Tilda Swinton; another produced by three-time Oscar nominee Lawrence Bender and directed by two-time Emmy winner and “Daily Show” writer Travon Free and Martin Desmond Roe; and another starring Oscar Isaac, who sports what ought to be an award-winning mustache.

The 10 shortlisted films, which were selected from a qualifying list of 174 shorts, will be narrowed down to five nominees by members of the Short Films and Feature Animation Branch, with an assist from any members of the Directors Branch who want to participate in the voting. (This is the one shorts category in which members of that branch are also allowed to vote.)

This is the third of TheWrap’s three looks at the shortlisted films in the shorts categories. The others:

A Guide to the Oscars Shortlisted Documentary Shorts, From the Holocaust to Sophia Loren

A Guide to the Oscars Shortlisted Animated Shorts, From Diana Rigg to Pixar’s First Gay Hero 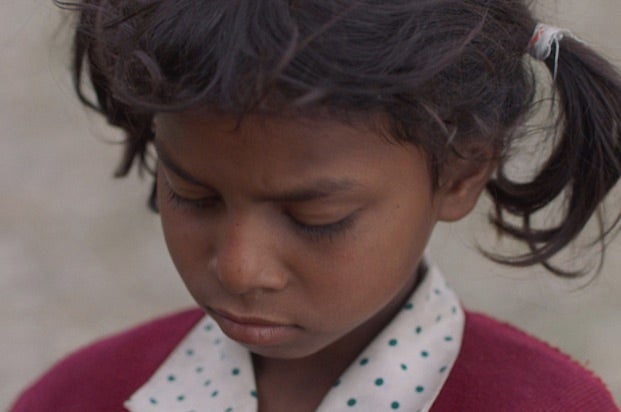 “Bittu”
Director: Karishma Dube
The only shortlisted film to qualify by winning one of this year’s Student Academy Awards, this drama from Indian-born NYU student Karishma Dube is also the roughest of the semifinalists. Set in a small mountain community in rural India, the film is based on a 2013 poisoning at a school; it follows an energetic and foul-mouthed young girl who creates problems at school, but whose misbehavior pales in comparison to a tragedy that befalls her classmates.

Dube, whose 2018 short “Devi” was a finalists in TheWrap’s ShortList Film Festival that year, has created a film that starts out ragged and gritty, and threatens to test viewers’ patience with its spirited but unpleasant central character. But the film grows more controlled as it unfolds over 17 minutes, and by the end it is genuinely moving. 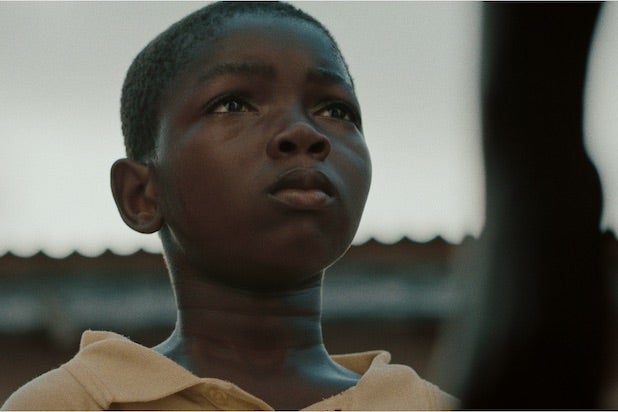 “Da Yie”
Director: Anthony Nti
This is another film that focuses on children in peril, a common theme in this category in recent years. “Da Yie” is set in rural Ghana, where two young kids, Matilda and Prince, are intrigued by a stranger who offers them a ride, buys them food and takes them to the beach before they realize that he has ulterior motives. The film takes place over the course of a day and is adept at creating a growing sense of unease and then dread as the kids realize they’re being pulled into a criminal underground.

At 20 minutes in length, the film moves slowly but effectively; it’s beautifully shot to convey the loss of innocence as the day goes on, the shadows lengthen and the danger mounts. But it never yields to despair, and its two nonprofessional child actors, who are themselves named Matilda and Prince, deliver performances that are both buoyant and affecting. 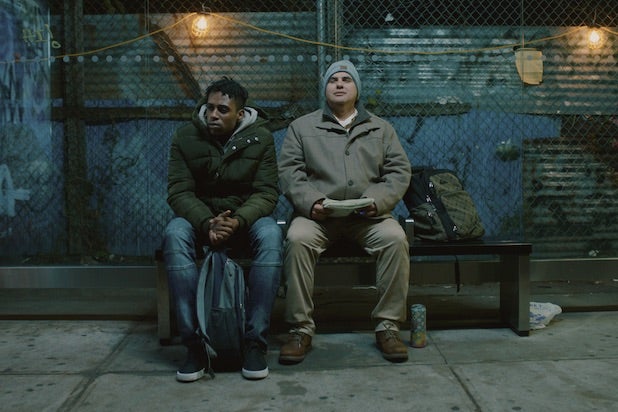 “Feeling Through”
Director: Doug Roland
A homeless teen goes from texting his friends to painstakingly tracing letters on the hand of a deaf and blind man he finds on a street corner in this drama based on an actual event in the life of writer-director Doug Roland. Executive produced by Marlee Matlin, it comes on the heels of the Sundance hit “CODA,” about a hearing girl in a deaf family, and is the first film starring an actor, Robert Tarango, who is both blind and deaf.

The short may well get attention because of its landmark status in the portrayal of disability, but it is also an touching film with sensitive performances by Tarango and by Steven Prescod as Tereek, the teen who has a transformational late-night encounter with a man he initially takes to be another lost soul. 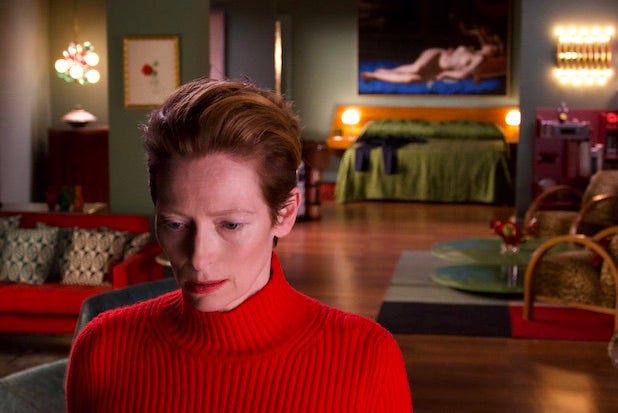 “The Human Voice”
Director: Pedro Almodóvar
Is this the 800-pound gorilla of the shortlist? It’s certainly the best known of the films, and the one with a two-time Oscar winning director, Pedro Almodóvar; an Oscar-winning star, Tilda Swinton; a distribution deal with Sony Pictures Classics; and a premiere at the Venice Film Festival in the Out of Competition section for features, not the short films program.

Almodóvar made the film, his first English-language production, during the pandemic, and based it on the same play by Jean Cocteau that also served as the inspiration for his 1988 breakthrough “Women on the Verge of a Nervous Breakdown.” Swinton stars as a woman who wanders around an empty flat and awaits a call from her departed lover, with a side trip to the hardware store to buy an ax. It’s haunting, arty and stylish as you’d expect from Almodóvar — as Alonso Duralde wrote in his review for TheWrap, “it’s absolute Almodóvar through and through, from its production design and aesthetic shout-outs to its deep understanding of longing and heartbreak, viewed through the eyes (and the voice) of a hypnotic female lead.” 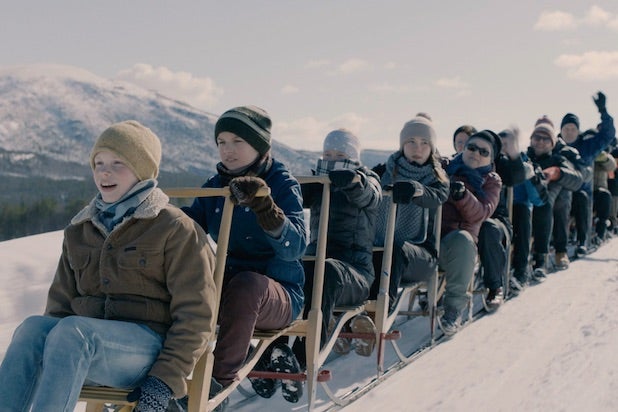 “The Kicksled Choir”
Director: Torfinn Iversen
This Norwegian short is in some ways one of the lightest of the shortlisted films, although it uses that lightness to deal with issues of masculinity, violence and particularly immigration. It stars Benoni Brox Krane as Gabriel, a 10-year-old boy who yearns to join a local group of carolers who travel the countryside on kicksleds singing to raise money for local refugees, and Stig Henrik Hoff as his gruff father, who’s predisposed to mistrust the refugees and who brands the singers “the stupidest thing I’ve ever seen.”

At first, Torfinn Iversen’s 18-minute film seems as if it will be a coming-of-age story of sorts, but Gabriel isn’t really the one who grows and changes. “The Kicksled Choir” is about a little boy and a strange choir, but it’s more about acceptance and compassion, which helps it turn into a sweet tearjerker of sorts. 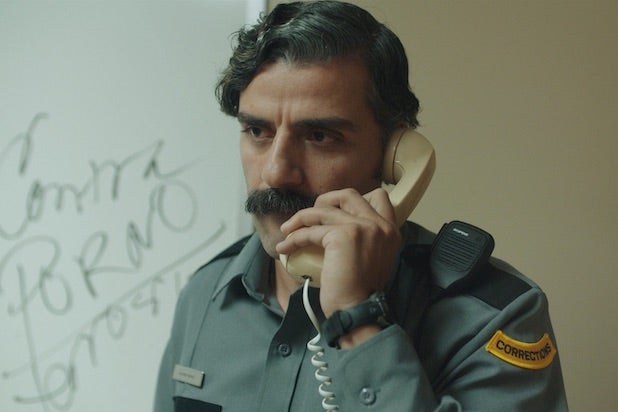 “The Letter Room”
Director: Elvira Lind
There’s also a wry side to “The Letter Room,” in which Oscar Isaac and his very formidable mustache star in this film written and directed by Isaac’s wife, Elvira Lind. Isaac plays a sad-sack correctional officer who’s transferred to a job reading and censoring all the mail coming to prisoners — a job that expands his horizons and draws him into the life of a woman (Alia Shawkat) whose boyfriend is on death row.

The film is a black comedy of sorts, and one that benefits from its leading man’s stillness and subtlety. But it’s also a sly meditation on human connection, and one that uses its dark humor in the service of a bit of heartache and some healing. Plus, Isaac’s brief and hapless moment on the basketball court at the very end of the movie is a nice punchline that you might miss if you’re not careful.

Also Read: Oscar Isaac and Jake Gyllenhaal to Play Francis Ford Coppola and Robert Evans in Film About Making of 'The Godfather' 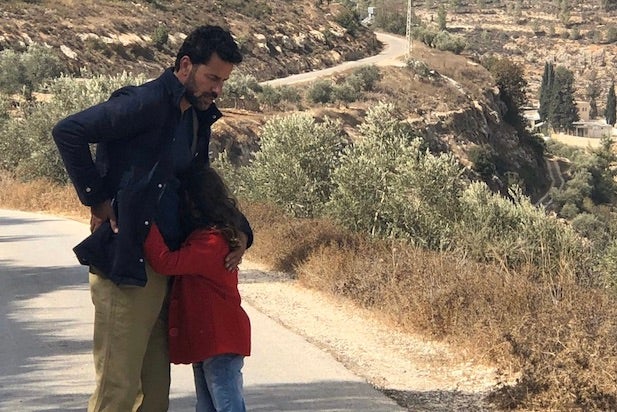 “The Present”
Director: Farah Nabulsi
First-time director Farah Nabulsi’s “The Present” is the only film to end up both on the Oscars’ shortlist and BAFTA’s “longlist” of 10 British shorts in the running for that award. It is a study in frustration and degradation, as a Palestinian man living in the West Bank tries to cross through a checkpoint to buy his wife a new refrigerator, only to be stymied and humiliated in front of his young daughter.

Palestinian actor Saleh Bakri turns the main character, Yusef, into a relatable everyman, but the film is stolen by Maryam Kanj, the young actress who plays his daughter. “The Present” is both infuriating and heartbreaking, and it’s her gaze that delivers the knockout punch. 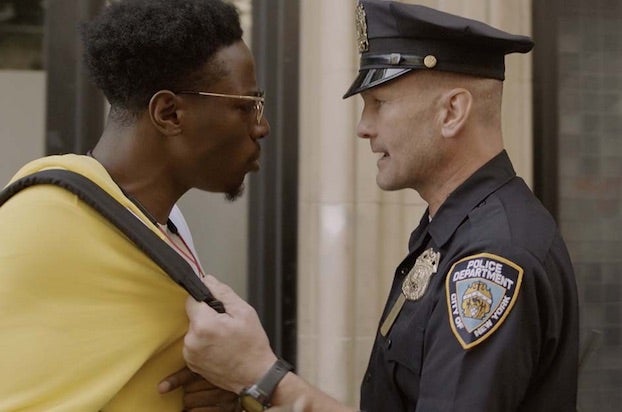 “Two Distant Strangers”
Director: Travon Free and Martin Desmond Roe
If “The Human Voice” is an obvious choice for the final five, “Two Distant Strangers” is the other film in this group that seems sure to be nominated. The film from Martin Desmond Roe and “The Daily Show” writer and comic Travon Free starts with an idea that might seem gimmicky: A Black cartoonist falls into a “Groundhog Day”-style time loop, in which no matter what he does, every day ends with him being killed by a policeman.

Taking a comic premise and dropping it into the middle of the Black Lives Matter movement and the discussion over police shootings of Black men and women could be an awkward fit if not done right, but Free’s film has a cumulative power that slowly replaces the inherent comedy with a growing horror. With Joey Bada$$ as the cartoonist who tries again and again to prevent the inevitable and Andrew Howard as the cop who stands in his way, the film takes a jokey sci-fi premise and turns it into a wrenching and potent story drawn from today’s headlines. 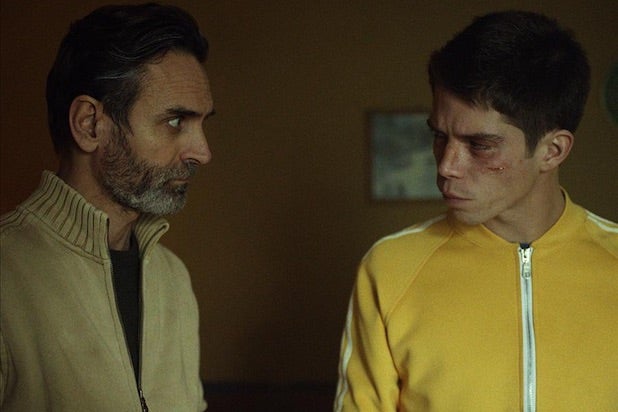 “The Van”
Director: Erenik Beqiri
The most brutal of the shortlisted films and also the shortest at 15 minutes, “The Van” is about a young man who raises money to get out of Albania by engaging in bare-knuckle fights to the death inside a moving van; when it stops and the door is unlocked, whoever walks out the door is the winner. The film’s world of gangsters, smugglers and hustlers is vivid but hard to watch, though you rarely see much of the action inside the van itself (for which you can be thankful).

“The Van” is grim and tough, an examination of family ties and generational divides. The twist that comes late in the film only takes a dark and disturbing film and makes it darker and more disturbing, but the live-action short category has seen plenty of dark and disturbing films lately. This one also has the pedigree of having premiered at the Cannes Film Festival in 2019. 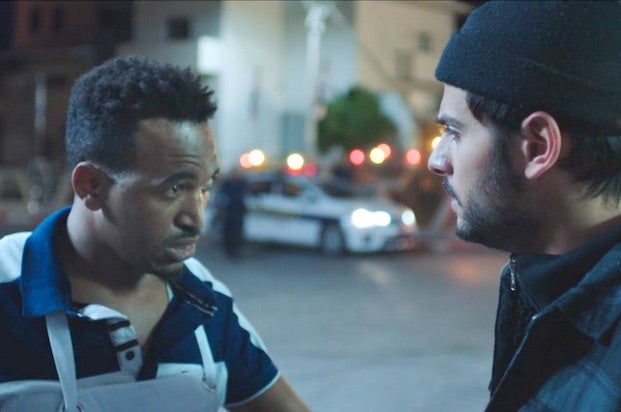 “White Eye”
Director: Tomer Shushan
A finalist at TheWrap’s ShortList Film Festival last August, “White Eye” is a virtuoso piece of filmmaking that takes place in one uninterrupted 20-minute take — without, Israeli director Tomer Shushan said, any cheats or hidden cuts. Inspired by an event from his own life, it follows a man who sees his stolen bicycle on the street; his quest to get it back impacts the lives of immigrants in a way he couldn’t have imagined.

One of several shortlisted films that deals with refugees, immigrants and borders, “White Eye” finds its camera weaving in and out of narrow streets and tight hallways, but its narrative takes its share of turns, too. What starts as a straightforward quest to reclaim property ends up complicated rather than straightforward, which gives the film a welcome amount of nuance and uncertainty.