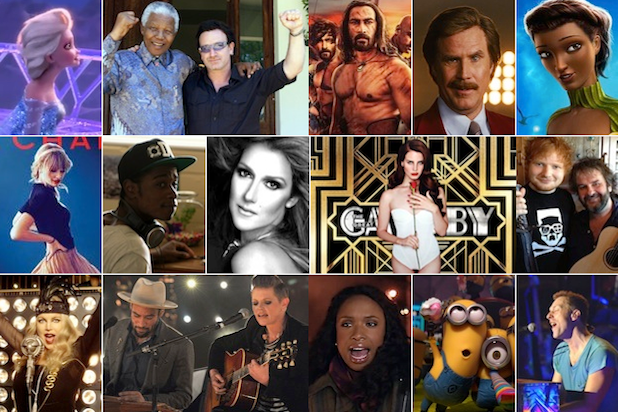 Before I wade into my annual survey of every song eligible for an Academy Award, I’d like to say one thing to all members of the AMPAS Music Branch who actually watched all 75 songs on the DVD that the branch sent to voters:

I’m impressed by your devotion to duty, because that is one tough job.

Granted, watching the three-hour-and-14-minute DVD that contains clips of all eligible songs only takes about 15 minutes more than sitting through “The Wolf of Wall Street” or “Blue Is the Warmest Color.”

But watching 75 back-to-back clips of the scenes in which the songs are used feels longer and tougher – because the while the Academy’s song screener shows you up to three minutes of each movie, it disconnects you from how the song fits within the overall context of the film.

Over the past four years, I’ve listened to (and occasionally graded) all the eligible songs by tracking down audio recordings of all eligible songs. But this year I watched them the way voters are supposed to do, on the Academy DVD that arranges them randomly.

After doing that – and after talking to some of the branch’s voters – I imagine that there was an awful lot of fast-forwarding going on when members sat down with their DVDs and their lists of contenders.

And I have to think that some great songs that were essential to their movies are going to get shortchanged by a process that invites dozens and dozens of submissions, then asks viewers to judge them on the basis of little snippets divorced from any larger context.

Ed Sheeran’s “I See Fire” and Alex Ebert’s “Amen,” for instance, are absolutely essential punctuation at the end of “The Hobbit: The Desolation of Smaug” and “All Is Lost,” respectively. But voters who haven’t seen the movies will simply hear the songs as they see a black screen and a crawl of credits, robbing them of almost every bit of their power.

Other notable songs with the misfortune to be serving their purpose over the end credits include Diane Warren’s title track to “Unfinished Songs,” the Kings of Leon’s subtle “Long Way Home” from “August: Osage County” and the Golden Globe nominees from Coldplay, U2 and Taylor Swift.

All were designed to work at the end of the movies – but by serving their purpose onscreen, they’ve hurt their chances with the Academy.

It’s no accident that of the 32 songs nominated since the Academy went to the current system, I count one that played over end credits without significant visuals to go with it.

(That was Dolly Parton‘s “Travelin’ Thru,” from “Transamerica.”)

By contrast, 20 of the songs, more than 60 percent, were performed by characters onscreen.

Yes, songs that are performed onscreen are often more integral to the movie than ones that play over the credits. Think of the best Oscar-winning songs of the last decade – “Falling Slowly” from “Once,” “The Weary Kind” from “Crazy Heart,” “Lose Yourself” from “8 Mile” – and you’ll probably think of the ones played within the movie.

But after watching the Music Branch screener, I’m even more convinced that there has to be a better way.

The other thing that’s annoying about this year’s field is that there are simply too many songs. Of the 75 entries, I’d hazard a guess that fewer than 30 of them have any real chance at being nominated.

And while I’d hate to say to any filmmaker or songwriter, “You have no shot – don’t enter,” the fact is that the five songs from, say, the Bollywood extravaganza “Kamasutra 3D” have no shot and shouldn’t have entered.

I don’t have any answers for how the music branch can fix this – but it’s clear, after going through the actual process, that it’s almost impossible to get a fair shake unless voters watch your whole movie.

But for those voters who do their best under the circumstances, my hat’s off to you – particularly if you refrained from hitting the chapter-skip button on your DVD remote when the fifth song from “Kamasutra 3D” or the fourth from “Austenland” popped up on the screen.

My trip through the musical wilderness is here.