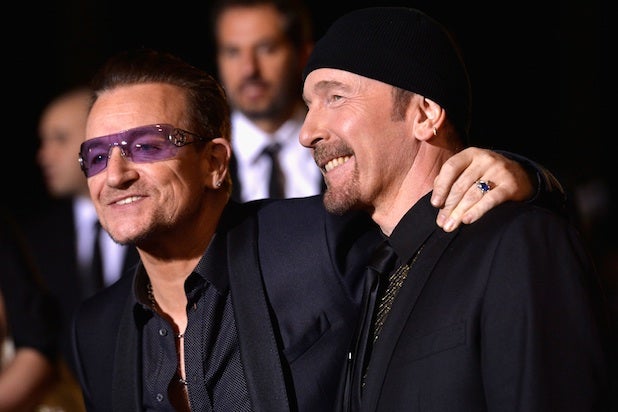 The group was honored with the Sonny Bono Visionary Award for its activism, but it was also on hand for writing “Ordinary Love,” the end-credits song in the Justin Chadwick film “Mandela: Long Walk to Freedom,” released only days before Mandela’s death on Dec. 5.

At Saturday night’s gala, Bono and the Edge sat down to talk about the song in TheWrap’s photo studio at the Palm Springs Convention Center. Incidentally, we figured out that it was almost exactly 25 years to the day since I sat with them in a Dublin pub on Jan. 3, 1989 for a Rolling Stone cover story.

How did you get involved with the movie?
Bono: I had a conversation with [producer] Anant Singh – we were trying to make this movie for 10 years. And he kept saying, though I wasn’t sure whether to believe him, that he wanted U2 to be part of it. I kept pointing out that we weren’t actually African, and he kept reminding me that Mandela was owned by a much wider community than Africa.

We had been working for [Mandela] since we were in our teens in the ’70s. U2 did its first anti-apartheid show in 1979. And really, throughout that the years following – from the “Make Poverty History” movement, debt cancellation, universal access to antiretroviral drugs – he was our bandleader.

He is no longer around, and that’s a hole we’re never going to be able to fill. But at least, when it came to writing a song for a movie about his life, we could try to feel useful.

Edge: It almost feels like Madiba [Mandela’s clan name] stage-managed his own exit, you know what I mean? If he were to to try and plan it so he would get the most attention and focus on his great work and on his values, he couldn’t have done a better job [than to have] an amazing movie to come out right at this moment. So we’re just happy to help in whatever small way we can to shine more light on what he represents and what he did as a leader – an international leader, an example to every politician.

Bono: An example of how to lead by serving, and by putting away the sort of partisanship that has brought this country to a halt. Very pertinent now, those lessons. Reaching across the aisle. Those are all things he was famous for.

The idea of U2 writing a song for a Mandela movie could make people think they’re going to get a big political song. But “Ordinary Love” isn’t that at all.
Bono: Maybe they were thinking we should write a big anthem, a “Pride (In the Name of Love).” But we were more focused on the eros and the agape. A complicated love story, which is this film, deserves a complicated love song. And that’s kind of our specialty.  ‘Cause when things get too straight, in terms of writing a love song, we start getting embarrassed. We come from that Roy Orbison school of dark love songs.

Anant sent us the love letters between Nelson and Winnie Mandela, and they were the key to the lyrics. They’re just beautiful letters. He loved language.

Edge: One of the strengths of the movie is also that it shows the character of Mandela in all his different phases. He started off as a troubled man who showed all the frailties of somebody who’s trying to wrestle with the big questions. And the great arc of the story is to see how he emerged after his captivity as this wise sage who had incredible judgement and incredible ability to forgive and to move forward into the future. A visionary. But I don’t think he always had those powers. Those were powers that he attained through his life.

So it’s a very encouraging story, in many ways, to see a man with those vicissitudes and failings come through and become the guy he eventually did.