It could be one of the most awesome moments ever on an Academy Awards telecast, though the Academy and the show’s producers might not be inclined to agree.

Picture this: Some star (let’s say Seth Rogen, to get those twentysomething viewers) introduces the next nominated song. The lights illuminate Sacha Baron Cohen, clad in full regalia as the character of gay fashion reporter Bruno.

“I’ve written a song that I hope is going to bring za vorld together,” he sings … and then, one-by-one, he’s joined by the cast of pop music superstars who appear in the film: first Bono, then Sting, then Slash, Snoop Dogg, Elton John, Chris Martin … 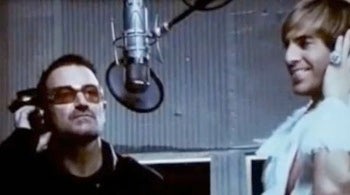 Two minutes into the song, Bono begins a verse. “I have a dream for the third world,” he sings. “Clean water, food and teaching.”

Whereupon the ABC censor goes nuts, the top brass of the Academy of Motion Picture Arts and Sciences sink slowly in their seats, and Jack Nicholson breaks into a huge grin from his spot in the front row.

Of course it’ll never happen, since the network’s standards and practices people would have forced lyric changes weeks earlier. But “Dove of Peace,” from Cohen’s film “Bruno,” is indeed one of the 63 songs eligible for the Oscar for Best Original Song.

And considering that its video, which comes at the end of the movie, is one of the funniest parts of that film, with its all-star cast of rock ‘n’ roll do-gooders solemnly intoning ridiculous lines, the song will probably play pretty well on the reel of clips that every member of the music branch must watch if he or she wants to vote.

(By the way, you can find the video on YouTube. I’m not going to post it here, because the only available versions are pirated, but you might want to go find it.)

And you know what? It’s not the only eligible song whose performance on the show might make some Academy members cringe. Consider these lyrics, all from songs that are eligible for the Oscar:

“What do you got that I ain’t got?
That’s what I wanna know
Can I get a piece of it?
A piece before you go?
Well give it up, yeah
Yeah, shove it right down my throat
Ah, I got one last thing to say to you,
Have you seen my coat?”
–Jack White, “Fly Farm Blues” (from “It Might Get Loud”)

“We’ll split their flesh, their bones, their skulls
The sound will burst their ears
We’ll let them know and make it clear
We’re the mothers of all fears”
[loud, sustained raspberry]
— Michael Danna and Jeff Danna, “We Love Violence” (from “The Imaginarium of Dr. Parnassus”)

I’d be surprised if any of these songs are nominated, though with precedents like “Blame Canada” and “It’s Hard Out Here for a Pimp,” you never know. (A more substantial, serious take on the category and contenders will follow soon.)

But if any of those songs do make the cut, I can’t wait to see how the Academy will handle them.