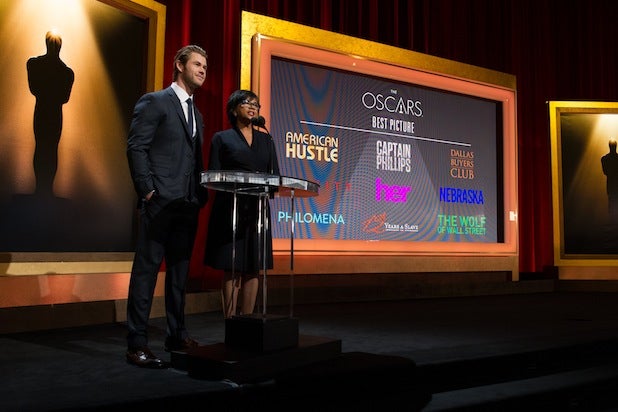 In theory, the Academy’s complicated system of counting ballots can result in anywhere between five and 10 Best Picture nominees.

In practice, it has given us nine nominees for the past three years in a row – which is to say, every time it’s been used.

I’ve had a feeling in recent weeks that we’ll have fewer than nine nominees this year, because there just aren’t enough films that’ll have the support needed to qualify. But I haven’t had any evidence to back up that feeling, other than knowing that when PricewaterhouseCoopers tested the system by going back and retroactively applying it to 10 years of voting, they came up with years of five, six, seven, eight and nine nominees.

But now I have some evidence that it might well be business as usual and that we’re quite possibly looking at another year of nine.

In the three years in which the system has been in use by the Academy, the Broadcast Film Critics Association has allowed me to instruct its accountant, Debbie Britton of CMM, LLP, in a recount of the Critics’ Choice Movie Awards ballots using the Oscar method.

While the CCMA use a weighted system that produces a flat 10 nominees, a recount using the Academy’s preferential system would have yielded eight Critics’ Choice nominees, not 10, in each of the last three years.

And each time, Academy voters went on to nominate nine.

So it stands to reason, at least intuitively, that another year of eight CCMA noms would mean another year of nine Oscar noms, while a year of fewer nominations from the critics could mean the same for the Academy.

Here’s how it worked, in a breakdown that also provides a primer in the Academy’s complicated system:

For starters, the Critics’ Choice voters, about 300 television, radio and internet critics, nominated these 10 films for best picture:

The films are listed in order of their total number of nominations, which ought to give a rough sense of how well-liked they are by the members of the BFCA. Critics’ Choice voters are a far smaller group than the 6,124-member Academy, and they’re film critics rather than film professionals – but in the past, their awards have been one of the most reliable predictors of Oscar success.

After counting the total number of ballots cast, you begin by determining the “magic number” required to guarantee a nomination. That is done by dividing the total number of ballots by 11 (the number of available nominations, plus one). Example: If 250 critics voted, the number would be 22.7. If the result is a whole number, you add 1; if it’s a decimal, you go up to the next highest whole number.

On the ballot, BFCA voters were asked to rank their top five films in order of preference – but at this stage of the count, we’re only concerned with No. 1 choices. Any film that is not the first choice of at least one voter is eliminated from contention, regardless of how many No. 2 or No. 3 votes it receives.

According to Britton, 28 of this year’s films received first-place votes and remained in the running. That’s the smallest number in the last four years, whose previous low was 31.

Any film with more than the magic number of first-place votes becomes an automatic nominee. Three films did so this year, the same as last year. (It’s likely that those three were “Birdman,” “Boyhood” and “Grand Budapest Hotel,” but the BFCA wouldn’t let Britton share that information.)

See video: Wrap Screening Series With ‘Birdman’s’ Michael Keaton: We Knew We Were Onto Something Risky

The next step starts by determining whether any films received enough votes to trigger an Academy wrinkle called the surplus rule. Created so voters wouldn’t be wasting their vote if they put a massively popular film at the top of their ballot, the rule takes any film that gets 10 percent more votes than it needs, and reallocates the unneeded portion of each vote to the film ranked second on the ballot.

For instance: If “Birdman” needed 23 votes to be nominated and got 46, it really only required 50 percent of each of its votes to secure a slot. So on every ballot that included the film in the top spot, 50 percent of the vote would be shifted to the film ranked second on that ballot. If it got, say, 20 percent more votes than it needed, then that 20 percent would be shifted to the No. 2 choice on each “Birdman” ballot.

This year, Britton said, two of the three films that clinched first-round nominations also went into surplus. And once the surplus votes were reallocated, two more films passed the magic number to bring the total number of nominees to five.

At this point, any film picked No. 1 on fewer than one percent of the ballots is eliminated. Of the 23 films still in play after the first five films secured nominations, Britton said that nine fell below the 1 percent line.

Ballots for those nine films were then reallocated, with their full votes going to each critic’s No. 2 choice. Again, if that second choice had already been eliminated or had already secured a nomination, the vote would have gone to the highest-ranked film still in the running. If none of the 14 films remaining in contention were listed on the voter’s ballot, that ballot was discarded.

Once the less-than-1-percent ballots were reallocated, every film that had more than 5 percent of the vote became a best-picture nominee. Every film with less than that did not. (In our hypothetical example with 250 voters, 13 first-place votes would be enough to secure a nomination; if everybody in the Academy voted, the number would be 307.)

When CMM ran those numbers, three more films crossed the 5 percent threshold to raise the number of nominees to eight. The remaining 11 films fell between 1 percent and 5 percent, and were not nominated.

Also read: State of the Oscar Race: An Underdog Frontrunner and Other Thoughts on a Crazy Season

The variable system also produces a “no man’s land” of ballots whose first choices received between 1 percent and 5 percent of the vote. Under the old system used by the Academy to produce a full 10 nominees, most of those ballots would have been redistributed during numerous subsequent rounds of re-allocation, and almost all voters would eventually contribute to the selection of at least one film.

Under the current system, though, the only ballots that undergo redistribution are the ones whose first choice triggers the surplus rule, and the ones whose top pick falls below 1 percent — in other words, votes for the most popular films, and for the least popular.

In 2011, TheWrap ran a simulation that suggested as many as 28 percent of the ballots could fall into this category, and be discarded without influencing the final slate of nominees. But then-AMPAS executive director Bruce Davis said that his simulations suggested that the number of “wasted” ballots would be far less than that.

In the Critics’ Choice reallocation, though, Britton said that a full 39 percent of the ballots would have ended up in that category.

Of the 28 films that received first-place votes, here’s the breakdown:

Will AMPAS voters nominate one more film than our simulation suggests, as they did the last three years? I still have a feeling that the field might be smaller than that, but it’s hard to shake the evidence that we’re heading for another year of nine.

We’ll find out when Oscar nominations are announced on Jan. 15. And about 12 hours after the Academy announces its nominees that morning, the Critics’ Choice Movie Awards ceremony will take place in Santa Monica and air live on A&E.