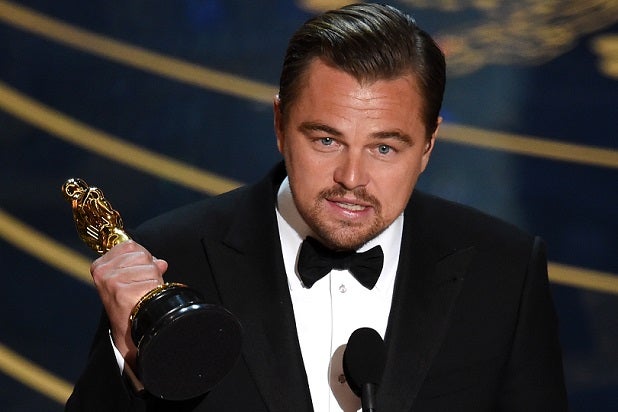 Leonardo DiCaprio walked away from the Dolby Theatre with his first Academy Award on Sunday night, landing Best Actor honors for “The Revenant,” while “Spotlight” was named Best Picture on an evening filled with sentiment and surprises.

Taking the stage at the 88th Academy Awards to a prolonged standing ovation, the actor thanked his costar Tom Hardy and “The Revenant” director Alejandro G. Iñárritu, who scored his own Oscar for directing the film.

DiCaprio also thanked Martin Scorsese, as well as his parents.

During his speech, the actor also addressed climate change, a favorite cause of his. “Climate change is real, it is happening right now. It is the most urgent threat facing our entire species,” DiCaprio said.

While it was named Best Picture, “Spotlight” won just two awards on the night. That made it the first Best Picture winner to nab only two Oscars since 1952’s “The Greatest Show on Earth.”

The independent drama about newspaper reporters uncovering the Catholic priest sex abuse scandal in Boston also took home the trophy for Best Original Screenplay. But its overall haul was only the night’s third best — behind six awards for “Mad Max: Fury Road” and three for “The Revenant” — a rarity for Best Picture winners.

Perhaps the most prominent presence in the show was the controversy over the lack of diversity among this year’s nominees. Oscars host Chris Rock dove head-first into the ceremony’s diversity problem, tossing out a barrage of jokes in his opening monologue that tackled the topic.

After a ceremony-opening montage featuring various films, Rock took the stage at the Dolby Theatre and declared, “Man, I counted at least 15 black people in that montage.”

Characterizing the ceremony as “the White People’s Choice Awards,” Rock went on to say, “You realize if they nominated hosts, I wouldn’t get the job.”

Rock brought up the boycott that arose from the #OscarsSoWhite outrage, saying that he’d considered boycotting but reasoning that the Oscars would have gone on without him anyway — and, besides, “the last thing I need is to lose another job to Kevin Hart.”

The Oscars host also noted that there had probably been all-white Oscars before, but there hadn’t been protests because black people had bigger concerns in the past.

“When your grandmother’s swinging from a tree, it’s really hard to care about Best Documentary Foreign Short,” Rock posited.

As for those who did boycott the show, Rock noted that Jada Pinkett Smith is on a television show and that “Jada boycotting the Oscars is like me boycotting Rihanna‘s panties. I wasn’t invited … it’s not an invitation I would turn down.”

In a particularly pointed jab, Rock joked that this year’s In Memoriam segment is “just going to be black people who were shot by the cops.”

In the end, Rock said, “We want black actors to get the same opportunities, that’s it.”

The diversity theme continued with a segment inserting black actors into some of this year’s nominated films, including Whoopi Goldberg as a mop-toting janitor in “Joy” and Rock himself as a stranded black astronaut in “The Martian.”

Musical performers included Sam Smith, who sang  “Writing’s on the Wall,” from the James Bond film “Spectre.” He was introduced by comedian Sarah Silverman, who dropped a string of jokes about how lame James Bond is in bed.

The Weeknd also performed his song “Earned It” from “50 Shades of Grey” in a performance that was equal parts aerial acrobatics, dance number and S&M homage.

Vice President Joe Biden was on hand to introduce musical performer Lady Gaga. Drawing the audience’s attention to sexual abuse, Biden asked viewers to take a pledge “that says, ‘I will intervene in situations when consent has not or cannot be given.” Biden directed viewers to the website ItsOnUs.org.

Gaga then performed the song “Til It Happens to You” from “The Hunting Ground,” joined on stage by a group of sexual assault survivors. The performance was given added currency by Gaga’s recent vocal support of singer Kesha, who alleges that she was sexually abused by her producer Dr. Luke.

Also Read: #FreeKesha, Explained: Why the Hashtag Is No Joke

It was a powerful moment, but ultimately Gaga and her co-writer, Diane Warren, lost the Best Original Song award to Sam Smith and Jimmy Napes for “Writing’s on the Wall.”

The ceremony was also marked by a number of whimsical moments.

After showing footage from “The Revenant,” the camera cut to a person sitting in the audience in a bear suit, applauding. Later, Rock said that he is always interested in meeting the real people that movies are based on — such as “Straight Outta Compton” subject Suge Knight.

On cue, the camera cut to a man dressed as Knight in prison-orange garb, bound in Hannibal Lecter-worthy restraints and guarded by police — a nod to Knight’s current legal woes.

In another sketch, Rock bemoaned that he’d been too busy preparing for the ceremony to help his daughters during Girl Scout cookie season, and he implored audience members to “reach into your millionaire pockets” to help out.

A troop of Girl Scouts then made its way into the audience to hawk cookies to the crowd. Rock implored the girls, “Come on, let’s get this money! Let’s get this money!” (Later, Rock revealed — jokingly, anyway — that the girls had raised $65,243 from selling cookies, many of them bought by Knight.)

Louis CK provided one of the more memorable presenter’s speeches, in the Best Documentary Short category. The comedian said that this was the one Academy Award that could change a person’s life — because the people who work in the field are doomed to relative poverty.

“You cannot make a dime on this. These people will never be rich as long as they live,” the comedian joked. “This Oscar is going home in a Honda Civic … it’s going to give them anxiety to keep it in their crappy apartment.” (“A Girl in the River” won.)