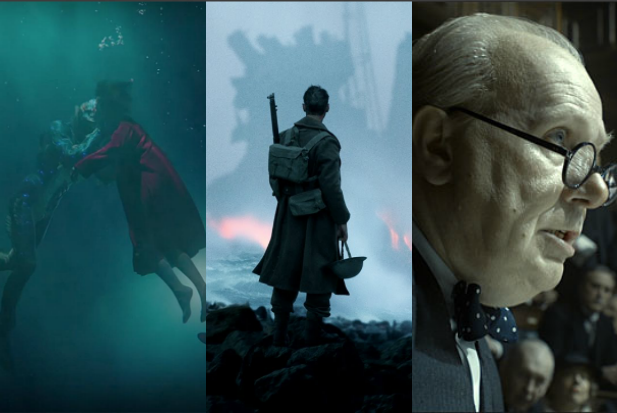 For A24, Fox Searchlight, and all the studios that have a film contending for Best Picture at the Oscars this year, the race is on to try and convert the new attention their movies have received into a big box office bump.

“It’s time to strike while the iron is hot,” said comScore’s Paul Dergarabedian. “The biggest bump comes not after Oscar Sunday, but after the nominees are revealed and moviegoers head out to theaters to catch up. By the time Oscar Sunday rolls around, most films have run their course in theaters.”

The films that have most to gain are the ones that hit theaters very late in the year: Fox Searchlight’s “The Shape of Water,” Focus Features’ “Phantom Thread,” and Sony Pictures Classic’s “Call Me By Your Name.”

“The Shape of Water,” which opened wide on Christmas weekend, has done fairly well so far with $30 million grossed. Guillermo Del Toro’s fantasy romance hasn’t been in more than 850 screens during its run, but Searchlight will expand the film into over 1,200 screens this weekend to take advantage of its Oscar-leading with 13 nominations.

Searchlight’s other Best Picture contender, “Three Billboards Outside Ebbing, Missouri,” will have a tougher time adding to its $32 million total, since it has been in theaters since mid-November and isn’t expected to add many more locations beyond the 956 it screened in the last week.

Focus, meanwhile, has the biggest upside of the bunch with “Phantom Thread,” which was expected to earn a Best Actor nod for the retiring Daniel Day-Lewis, but ended up exceeding expectations with six nominations. Paul Thomas Anderson’s drama was released for a limited 70mm engagement on Christmas Day and didn’t expand nationwide until this past weekend when it made $3.3 million from 896 screens for a running total of $6 million. It will expand again this weekend into just over 1,000 screens.

“‘Phantom Thread’ was going to get a bump because it was an acting contender, but now that it’s in the running for Best Picture, it’s going to get a lot more interest even though it came out as late as you can get in the awards season calendar,” Dergarabedian said. “It’s still very early in its run so we could see it become a popular film for older audiences.”

“Call Me by Your Name” also timed its expansion schedule to the Oscar calendar, slowly making money as a hot ticket in limited release before expanding to 815 screens this weekend and making a $9.1 million total. Like “Phantom Thread,” “CMBYN” was expected to be a contender in several major categories, but its Best Picture nod ensures that it will be a must watch for Oscar completionists. Sony Pictures Classics is expected to expand the film, though an estimate is not yet available.

Outside of these three nominees, other Oscars contenders are already well into their theatrical runs. “The Post” has already done relatively well with $45 million grossed so far after expanding wide with 2,851 screens, but its bump should be minimal as its Oscar footprint is much smaller than expected. It went into Oscar season expected to be a major contender with a strong cast and allusions to today’s politics and media, but aside from its Best Picture nomination, it only got one other nod for Meryl Streep’s lead performance. Focus’ other contender, “Darkest Hour,” came out in mid-November and has made $41 million, but should also get a minor bump as it expands to approximately 1,300 screens as Gary Oldman becomes the heavy favorite to win Best Actor.

On the other hand, A24’s “Lady Bird” should continue to quietly endure all the way to Oscar Sunday. It has made over $1 million every weekend for a $39.2 million total since mid-November despite peaking at 1,557 screens a month ago. A24 may give the film another push, as Greta Gerwig, in her directorial debut, has become only the fifth woman to be nominated for Best Director. At a time when diversity in Hollywood is a major topic and women in the industry are demanding to make their voices heard, Gerwig’s film and the performances by stars Saoirse Ronan and Laurie Metcalf have gained a timeliness that should keep it going at its current pace for the weeks ahead.

Finally, there are the two films that have by far made the most money out of this year’s field, but have already had their runs: Warner Bros.’ “Dunkirk” and Universal/Blumhouse’s “Get Out.” “Dunkirk” performed quite well this past summer, earning $188 million domestically and $525 million worldwide, landing it in the top 20 highest grossing films of 2017. The WWII film received heavy support from IMAX, who provided the cameras for it, and Warner Bros. marketed it as an event film that would best be seen on the big screen. With that in mind, WB will try to get a bit more mileage out of “Dunkirk” by placing it back on 250 screens this weekend.

As for “Get Out,” the film has already run its theatrical course since it was released almost a year ago. But it has already made its case, receiving critical acclaim and arguably becoming this year’s populist pick with $175 million domestic gross against a mere $4.5 million budget, with strong opportunities for post-theatrical revenue on streaming and rentals coming as movie buffs revisit it, or perhaps finally get around to watching it. Combined, “Dunkirk” and “Get Out” account for 64 percent of the $566 million in domestic revenue made by this year’s BP nominees, up 17 percent from the $484 million made by last year’s contenders.