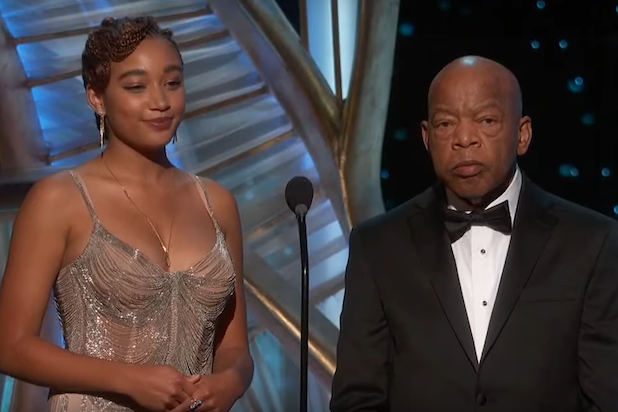 In a change of pace, the Oscars brought on leading figures from beyond the movie world to introduce this year’s Best Picture nominees, including famed civil rights activist and Georgia Congressman John Lewis. But how Lewis was used left many on Twitter seething.

Lewis is best known for decades of civil rights activism, most famously suffering injuries at the hands of state troopers at the Edmund Pettis Bridge during the 1965 Selma March. At the Oscars, he was joined by Amandla Stenberg, star of the Black activist drama “The Hate U Give,” and together they provided the introduction for “Green Book,” which went on to win Best Picture.

“I can bear witness that the portrait of that time and place in our history is very real. It is seared in my memory,” Lewis said of the Jim Crow South, which “Green Book” takes place in.

“Our nation bears the scars of that time, as do I.”

But “Green Book” has faced a backlash on multiple fronts since it won the Best Musical or Comedy Golden Globe in January. The family of Dr. Don Shirley, played in the film by Mahershala Ali in an Oscar-winning performance, called the movie “a symphony of lies,” while reviewers criticized it for making the white lead, Tony Vallelonga, the central protagonist instead of Shirley.

Along with that, lead star Viggo Mortensen was criticized for using a racial slur during a post-screening panel, tweets by screenwriter Nick Vallelonga claiming Muslims in New Jersey celebrated 9/11 were unearthed, and a 1998 interview of director Peter Farrelly talking about how he would flash his penis to people in Hollywood as a prank was also found.

In light of all the scandals and critical appraisals, many on Twitter were displeased that Lewis was slotted to introduce “Green Book” rather than a film made by black filmmakers like Spike Lee’s “BlacKkKlansman” or Ryan Coogler’s “Black Panther,” the latter of which was filmed at Pinewood Studios near the Atlanta district Lewis represents.

I can’t believe they have John Lewis introducing Green Book.

They really made JOHN LEWIS come up here with all his legitimate history and gravitas and introduce GREEN BOOK. Isn't this against the Civil Rights Act?

How sly of the Academy to have Civil Rights icon John Lewis present a clip from GREEN BOOK. The perfect kind of damage control aimed at the inevitable backlash that was to come with its Best Picture win. #Oscars2019

John Lewis is introducing Green Book, which would only make sense if the movie paid homage to the Negro Motorist Green Book. Whose idea was this? pic.twitter.com/Zd9ETTbaAT