Academy Awards ballots are due on Tuesday at 5 p.m., which means films only have a few days to present their final cases before the voters. And that means that the contenders, and the studios and consultants running their campaigns, have by now trotted out their final ad campaigns.

The trick at this point in the calendar is to become the consensus movie that can win under the preferential voting system used in the Best Picture category — to appeal not just to the voters who got you nominated, but the others who might consider ranking you second or third on their ballots.

Most years, ground zero for the phase-two Oscars ad wars is the Sunset Strip in West Hollywood, where the top contenders often rent out prime-location billboards. There’s less of that this year — I mean, what’s up when “Three Billboards Outside Ebbing, Missouri” doesn’t have any billboards on Sunset? — but a few films have staked out their positions there.

“Lady Bird,” for instance, has a quartet of signs stretching from Holloway to Stanley. “Dunkirk” has one over Book Soup, albeit one so dense with writing that’s hard to read as you’re driving. And “Darkest Hour” and “Call Me by Your Name” each has a sign further east.

Mostly, though, the street plays host to television and music ads, while the Oscars ad wars are waged in print, on television and elsewhere around town.

A rundown of who’s saying what in the Oscars homestretch: 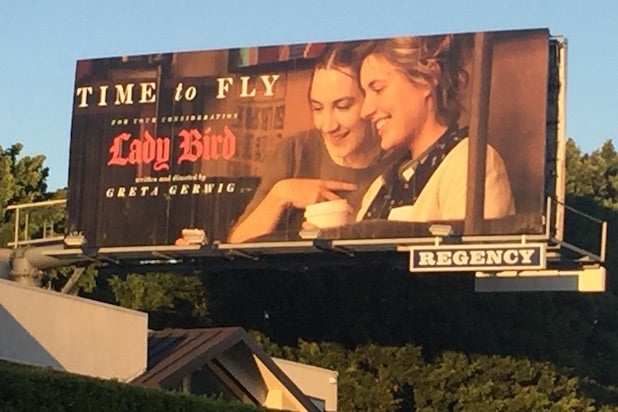 The line is used over photos of star Saoirse Ronan, so it can apply to her character coming into her own in the movie — but all of the ads prominently mention (and occasionally picture) writer-director Greta Gerwig, only the fifth woman to be nominated for Best Director at the Oscars. So distributor A24 is clearly also referring to this being Gerwig’s time to fly, and by extension the time for all female filmmakers to step up.

That’s a way of directly tying the film to the TimesUp climate in Hollywood’s year of women stepping up and speaking out. (Keep reading and you’ll see they’re not the only ones doing that.)

Also Read: How 'Lady Bird' Star Saoirse Ronan Grew Up (and Got Off Twitter) 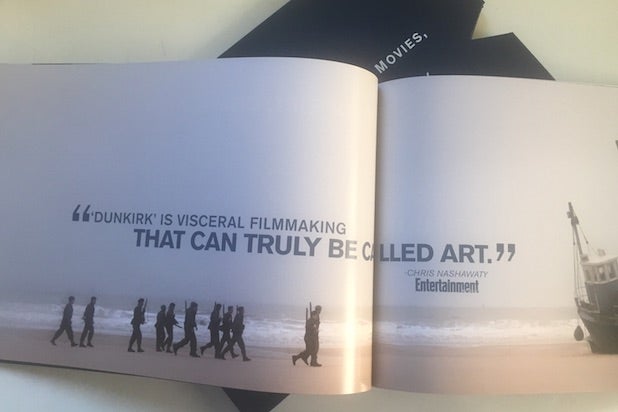 Movie: “Dunkirk”
Message: It’s Christopher Freakin’ Nolan, people.
Nolan’s adventurous epic has already made almost $200 million at the box office, but the recent barrage of print ads, television spots and a lavish, slipcased 48-page booklet inserted into a Hollywood trade (because you can’t send it to Academy members) aren’t aimed at boosting the take.

Instead, the new materials all emphasize that this big hit is also the work of a true auteur. Producer Emma Thomas describes the film as an art movie in TV ads; in print, Warner Bros. prominently uses quotes like “Leave it to a filmmaking virtuoso at the peak of his powers to break new ground and all the rules” and “Like the most revolutionary movies, it has merely created a new storytelling vocabulary.”

The purpose is to tie the movie to the vision of one man — by the way, a man who’s been overlooked by the Oscars in the past — and to insist that indie movies don’t have a monopoly on artistry. 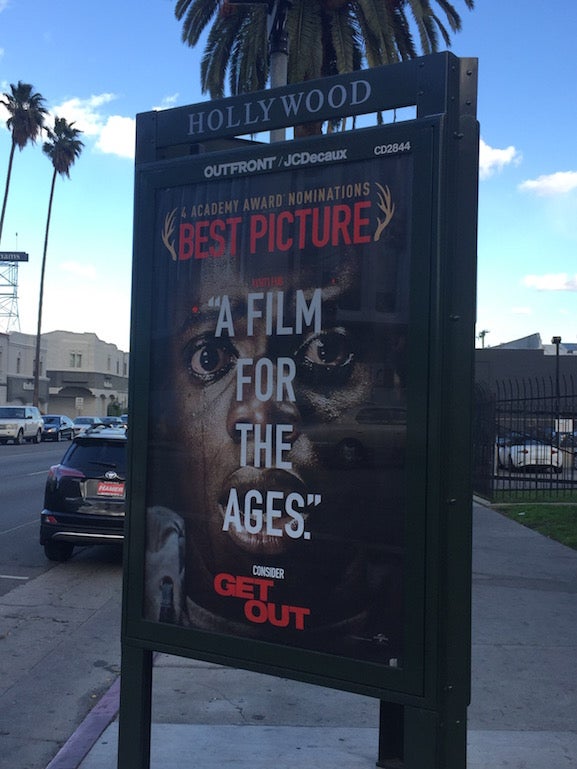 Movie: “Get Out”
Message: It’s important.
“Get Out” is the other big hit among the best-pic nominees, and the other beneficiary of a substantial major-studio ad push. Like Warner Bros.’ “Dunkirk” campaign, Universal has changed the subject from the film’s success to its art — and in particular, its resonance in a turbulent year.

“‘Get Out’ will stand as both the definitive film of 2017 and the one with the longest cultural shelf life,” says one ad; “A film for the ages,” adds a bus-stop poster.

In other words: It might be a horror thriller released last February, but this is a significant cultural statement so it’s OK to vote for it. 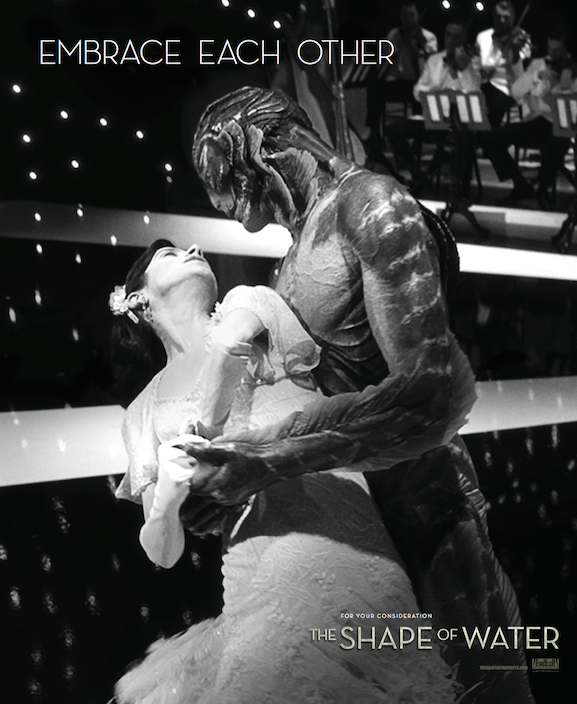 Movie: “The Shape of Water”
Message: You know you want to hug us.
Guillermo del Toro’s film is the closest thing to a love story among the top Oscars contenders, even if the love in question is between a woman and a fish-man. And Fox Searchlight is playing that up with a series of variations on a theme: “Embrace Each Other,” “Embrace Life,” “Embrace Love,” “Embrace Strength,” “Embrace Artistry,” “Embrace Vision” and simply “Embrace ‘The Shape of Water.'”

It’s a reminder that this isn’t just a dazzling fantasy, but a movie that makes you feel.

Also Read: Guillermo del Toro Says 'The Shape of Water' Teaches Empathy for 'the Other' (Video) 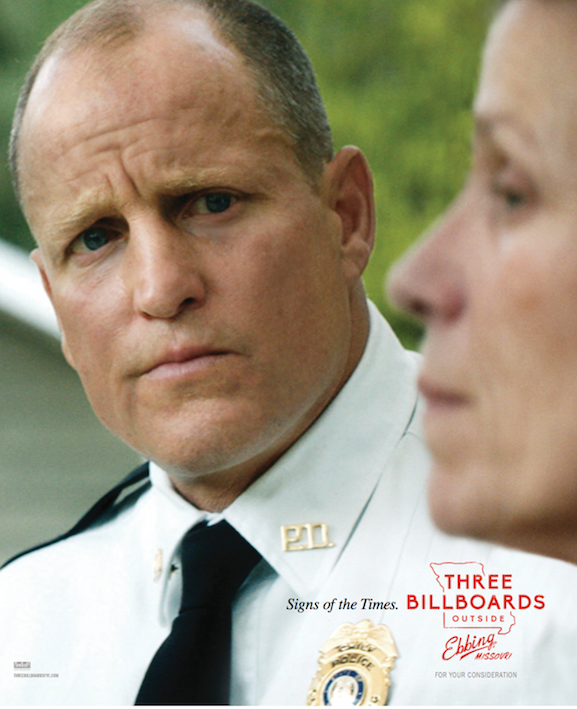 Movie: “Three Billboards Outside Ebbing, Missouri”
Message: #UsToo.
In contrast to the multiple tag lines in its “Shape of Water” ads, Fox Searchlight has gone with a single line for phase-two “Three Billboards” advertisements: “Signs of the Times.”

It’s a way of positioning Martin McDonagh’s blackly humorous drama, which the Irish playwright and director wrote many years ago, as a statement for the era of #MeToo and #TimesUp. This is a movie about a woman who can take no more and is seizing control of the narrative — and the ads are a way of making Frances McDormand’s furious, grieving mother a stand-in for all the women who have been speaking up over the past five months.