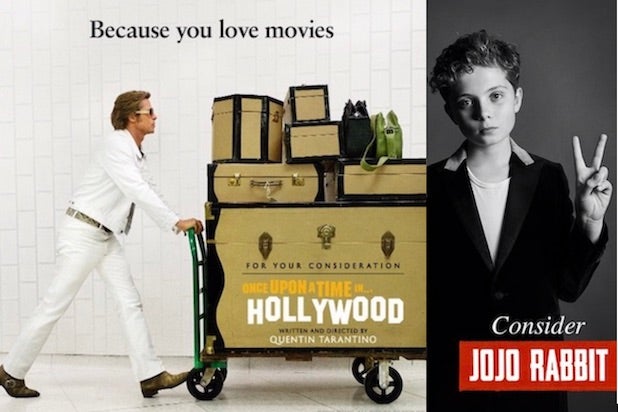 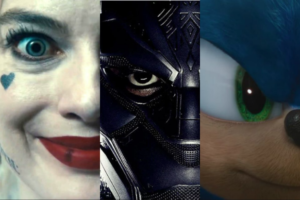 Can February’s Box Office Hit New Heights Without a ‘Black Panther’ or a ‘Deadpool’?

”Once Upon a Time … in Hollywood“ and ”Jojo Rabbit“ have gone with new angles, while other films are sticking with the imagery that got them this far

Oscar voting ends on Tuesday, only six days after it began thanks to the earliest-ever edition of the Academy Awards. With less time than ever before to make a final impression, and some awards campaigners are sticking with their ad strategies while others are tweaking the message to lure voters in the homestretch.

You used to be able to see these battles waged on billboards along the Sunset Strip in West Hollywood — but since Netflix bought many of those signs, that stretch of road plays more like an indicator of the streaming service’s priorities than a real Oscars battleground. Granted, Sony has a billboard for “Little Women,” Warner Bros. has one for “Joker” and Disney has used the side of a building that always sports the studio’s ads for “Ford v Ferrari” from Fox, which is now owns — but those pale next to the eight Netflix billboards for “The Irishman,” five for “Marriage Story” and two for the documentary “American Factory,” along with single billboards for “The Two Popes,” “I Lost My Body” and “Klaus.”

Here’s our annual look at who’s saying what in an attempt to lure voters at the last minute. 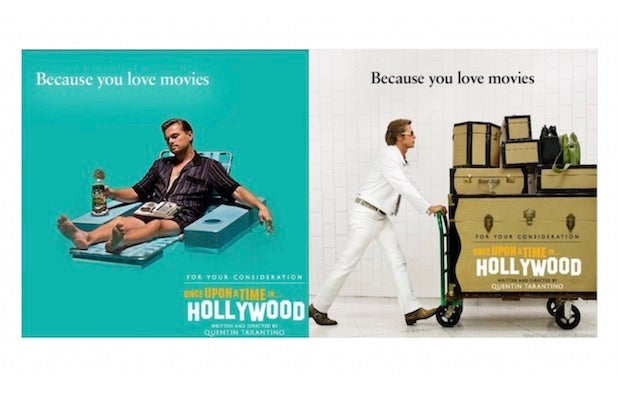 “Once Upon a Time … in Hollywood”
Message: This is your movie, Hollywood.

Quentin Tarantino’s film about a fading TV star (Leonardo DiCaprio), his loyal stuntman (Brad Pitt) and the folks they encounter in 1969 Tinseltown, including Sharon Tate and the Manson Family, has had the biggest Phase 2 makeover, with a brand new slogan that emblazons all of its For Your Consideration ads: “Because you love movies.”

Sony has been using that line in advertisements and also emphasizing it via a video feature subtitled “A love letter to making movies.” The message is aimed squarely at the voters who made Best Picture winners out of “The Artist” and “Argo”: If you want to celebrate Hollywood, this is the movie to do it.

Of course, there’s a secondary message to those shots of DiCaprio and Pitt effortlessly exuding charm that pops off the page: “Because you love movies … and because you love Leo ‘n’ Brad, too.” 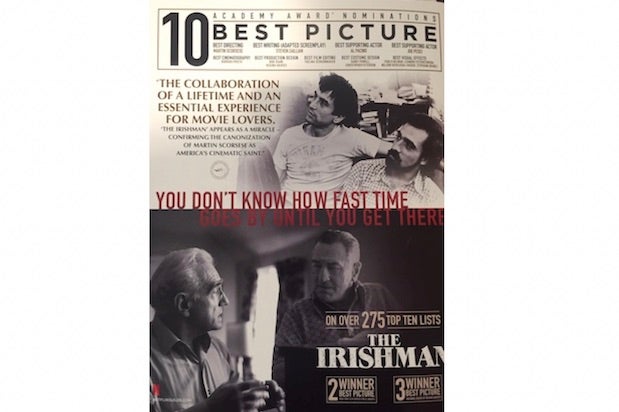 “The Irishman”
Message: Because you love movies … by Marty.

On the surface, the “Irishman” campaign hasn’t changed much since the days when the film drew rave reviews out of the New York Film Festival and was considered a Best Picture front-runner. For the most part, the ads use the same still photos, the same dark, somber look and the same emphasis on the three-and-a-half-hour Martin Scorsese film as a landmark.

But the emphasis is more and more strongly centered on Scorsese himself, and on positioning the film as a summation of his past work, particularly in the mob genre. One billboard on a prime stretch of Sunset trumpets a quote from Rolling Stone: “Martin Scorsese — America’s greatest living director — creates his late-career masterpiece.” And another juxtaposes a photo of Scorsese and star Robert De Niro on the set of the new film with one taken on the set of one of their earliest collaborations from the 1970s. The two photos are separated by a quote from “The Irishman”: “You don’t know how fast time goes by until you get there.”

In other words: Scorsese is a national treasure, this film is a summation of sorts and the time to honor him is now. In a way, the approach is reminiscent of what The Weinstein Company did with 2002’s “Gangs of New York,” promoting it as the career summary for which Scorsese deserved his first Best Director award. (It didn’t work then, since “Chicago” won Best Picture and Roman Polanski won Best Director for “The Pianist.”) 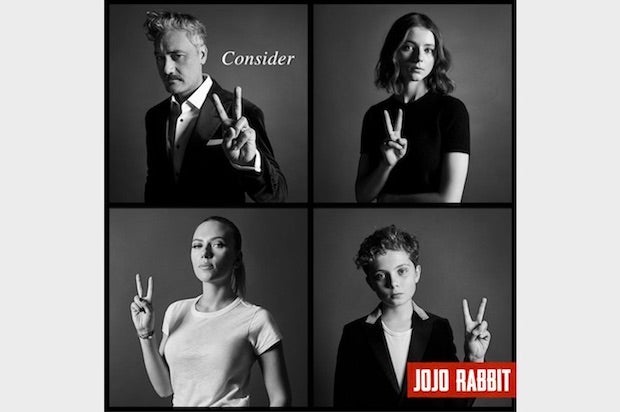 Apart from “Once Upon a Time … in Hollywood,” “Jojo Rabbit” has had the closest thing to a Phase 2 makeover. In many of the ads in the past week, the usual shots from the film, and the usual colorful graphics and lines like “An anti-hate satire,” have been replaced by black-and-white portraits of director Taika Waititi and stars Scarlett Johansson, Roman Griffin Davis and Thomasin McKenzie flashing the peace sign — while ads that include photos from the film often bear slogans like “Never Too Soon for Peace.”

While the peace sign had been a staple of “Jojo” ads from the start, the black-and-white photos and starker look drives the message home in a more serious way and positions the film not so much as a sharp, satire but as the gentler, healing drama — the movie everybody can rally behind, because who doesn’t want peace?

Then again, if you’re looking for a more complex message, there’s also a new “Jojo” ad that quotes no less than early 20th-century Austrian poet Rainer Maria Rilke (“Let everything happen to you: beauty and terror. Just keep going. No feeling is final.”), who has likely never before been cited while talking about the work of Taika Waititi. 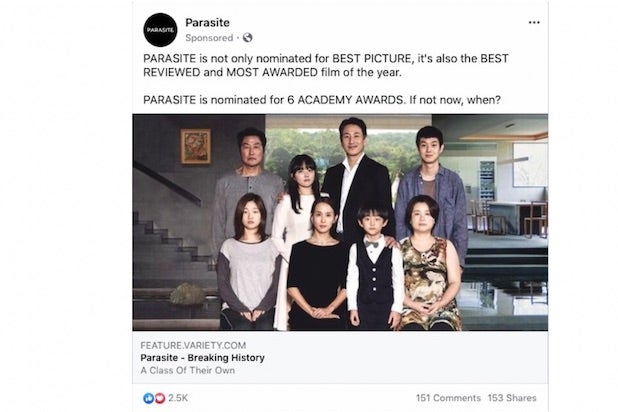 The campaign for “Parasite” hasn’t changed dramatically, except perhaps to get a little bolder as the film has picked up one guild award after another. But on Facebook, it’s hard to avoid the film’s reposting of all the rave reviews and the think pieces telling the Academy that they have to give Bong Joon Jo’s film the Best Picture award. And on quite a few of those, the same line is used in the intro: “If not now, when?”

Clearly, Neon knows that “Parasite” is closer to winning the big award than any non-English film has ever been. And they want the Academy to think about that, and to decide that this is the time to break new ground.

Also Read: 3 Reasons Why 'Parasite' Really Could Win Best Picture - And 1 Reason Why It Can't 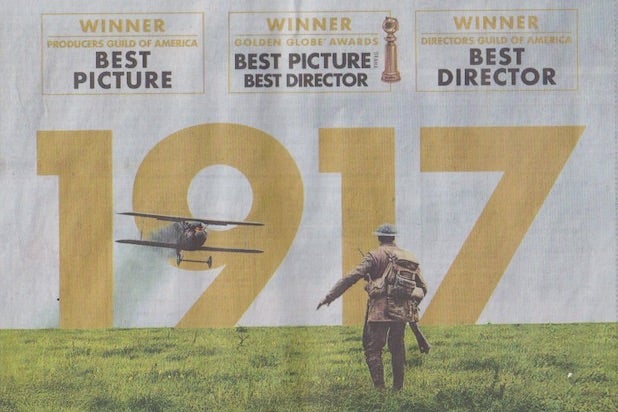 Sam Mendes’ World War I drama has already picked up many of the key precursor awards on the road to Oscar: the Golden Globe for Best Motion Picture – Drama, the Producers Guild and Directors Guild Awards, the BAFTA Award. So increasingly, the message in its ads is a simple one, and one that is aimed at everybody’s desire to be on the winning side. 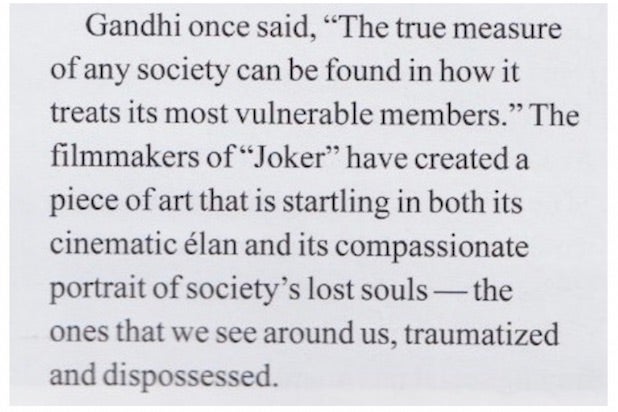 “Joker”
Message: We are not a comic book movie, dammit.

The print ads pretty much look the same, but “Joker” is now drawing its message from something that Joaquin Phoenix said at the Critics’ Choice Awards last month about the film’s writer and writer-director: “Scott Silver and Todd Phillips, you tricked us. You took a comic-book character and used it to talk about childhood trauma, gun violence, isolation and mental health.”

Lines like those are now used to position “Joker” not as the top-grossing film among the Best Picture nominees (by far), but as a serious work about serious issues. That’s spelled out in the ads, but most notably in the six different stories in a special 12-page advertorial section in a recent issue of Variety (“Partner Ad Content,” it says on some of the pages). The opening story pretty much lays it on the line, starting with the headline “‘Joker’ Proves the Power of Empathy” and, in the final paragraph, quoting Mahatma Gandhi: “The true measure of any society can be found in how it treats its most vulnerable members.” (Granted, in this case the vulnerable member of society is one who becomes celebrated when he starts killing people, but still.) 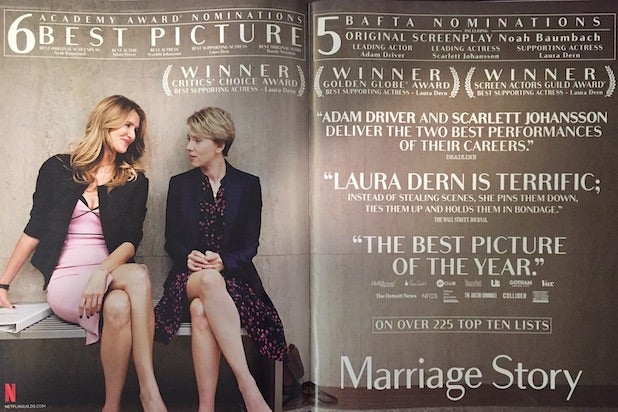 The Best Picture chances of these films have largely faded away, so the ads remain straightforward, touting all the Top 10 lists and critical raves, and often focusing on the categories in which the films have the best chance. “Marriage Story” focuses on Laura Dern for Best Supporting Actress. “Little Women” singles out Greta Gerwig’s screenplay. “Ford v Ferrari” plays up on the scale that could lead to below-the-line awards: “Big screen moviemaking at its finest,” reads a huge ad for the film covering the side of the building on Sunset.

Others
There’s a big battle being waged in the Best Animated Feature category, where rivals have perceived weaknesses in the normally dominant Pixar (which has “Toy Story 4”) and Disney (which wasn’t even nominated for “Frozen II”). DreamWorks Animation has been aggressively advertising “How to Train Your Dragon: The Hidden World,” Netflix is of course touting “Klaus” and “I Lost My Body” and Laika/Universal have been particularly active with ad buys on behalf of “Missing Link.”

At the top of one recent “Missing Link” ad was a list of the other Laika films nominated in the category (“Coraline,” “ParaNorman,” “The Boxtrolls” and “Kubo and the Two Strings”) along with a quote: “‘Missing Link’ is the fifth Laika film to be nominated and is now the most nominated studio without a win.” That final phrase was in extra-big type.

There has also been a last-minute flurry of ads in the documentary feature race (“American Factory” v. “The Cave” v. “The Edge of Democracy” v. “For Sama,” with “Honeyland” taking out fewer ads but getting extra attention because it’s also nominated for Best International Feature Film). And in the competition for Best Original Song, ads for “Harriet” all tout its nominated song while the songs from Diane Warren (“Breakthrough”) and from Elton John and Bernie Taupin (“Rocketman”) have also been visible.