For a while there, it looked so clear-cut.

The Oscar sweepstakes was a two-horse race, the blockbuster “Avatar” vs. the critics’ and guild favorite "The Hurt Locker."

But upsets are not unheard of come Oscar night. And within the last couple of weeks, the buzz has been suggesting that an upset could come in the shape of Quentin Tarantino’s “Inglourious Basterds.” 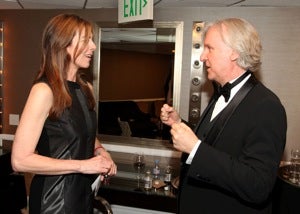 Harvey Weinstein, to be sure, has done a brilliant job of casting "Basterds" as the third alternative.

He’s done this in the past with films like “Shakespeare in Love” and “The Cider House Rules,” persuading voters, sometimes successfully and sometimes not, that his horse is the only one that has a real shot at knocking off the frontrunner.

Can he pull it off?

Here’s how the race is shaping up so far — and what could muddy the waters.

When “Avatar” was released, it suddenly had Best Picture stamped all over it. Not only was it drawing huge crowds, but two words in particular were being used to describe James Cameron’s 3D epic: game changer.

And “Hurt Locker”? A terrific movie, without question. But gritty little war dramas just don’t take home the gold on Oscar night. Especially not when the war is one we’re still fighting.

And along with the movie, Kathryn Bigelow was racking up Best Director kudos, including the big one, the DGA.

Suddenly, the race came down to the top-grossing film of all time vs. what would be the lowest-grossing Best Picture winner ever.

And that’s where it seemed to stand, with the smart money actually giving it to Bigelow and her film by a nose.

Weinstein has been pulling out all the stops, flatly proclaiming that "Basterds" is going to win Best Picture.

To that end, Quentin Tarantino has been making constant public and private appearances. Audi sponsored a packed party for film and director. Norman Lloyd and Roger Corman threw a smaller lunch at Musso and Franks.

The latter gathering seemed to suggest that Tarantino has the approval of an odd subset of the Academy, voters like Mickey Rooney, who told the L.A. Times that he doesn’t see new movies.

Under that system, voters are asked to rank all 10 nominees from first to last. Unless one film gets more than 50 percent of the first-place votes – which, let’s face it, is virtually impossible in this year’s race – the film with the fewest Number One votes will be eliminated. Its ballots will then be redistributed into the pile of whatever film is ranked second on each ballot.

The process continues, with the last-place film eliminated in each subsequent round, until one film winds up with a majority of the votes.

The system means that Number One votes alone won’t be enough to propel a film to victory — it’ll also need to be ranked second or third on lots of ballots if it wants to hit that magic number.

“Avatar,” it seems, should get lots of Number One votes – but it might also be ranked pretty low on the ballots of voters who don’t think it’s the best, leaving an opening for another film that’s more of a consensus favorite to ride to victory on the strength of more second- and third-place votes.

That’s Weinstein’s strategy for how “Inglourious Basterds” is going to sneak in and steal the top prize, and it’s also the method by which others think films like “Up In the Air” and even “Up” could become serious competitors.

I’m not buying it.

I think the preferential system will definitely hurt “Avatar,” but I think it’ll help “Basterds” less than it’ll help “The Hurt Locker.” “Basterds” may be less divisive than “Avatar,” but it’s not the kind of broad, consensus favorite that could challenge the frontrunners.

It’s too sprawling, too audacious, too violent and too brazenly, defiantly revisionist to be an everybody’s-top-five kind of movie.

Yes, “Basterds” beat “Locker” for the SAG ensemble award. But that prize traditionally goes to big casts, not small ones. I don’t see that translating into a decisive edge with the Academy’s actors branch, which gave the two films the exact same number of nominations: one Best Actor nod for “Locker,” one Supporting Actor plaudit for “Basterds.”

As for the other films that could sneak in via the preferential ballot, “Up in the Air” and “Up” may well make moves as the count goes into its later rounds, making up for a smaller number of Number One votes with lots of Twos and Threes.

But they’re going to start with a significant disadvantage (particularly “Up”), and I don’t think they’ll be able to make up ground fast enough to become real contenders.

Which means, I’d say, that we’re back to that two-horse race, “Avatar” vs. “The Hurt Locker.”

And one of those horses — the smaller one — has a clear lead.

“The Hurt Locker” has just about swept the important precursor awards. In fact, the only time “Avatar” beat it in a head-to-head race came at the Golden Globes, whose voters have absolutely nothing in common with Oscar voters.

To me, those guild victories — particularly the ones from the PGA and ACE — signify that the film has serious across-the-board support.

When the accountants get to work and “Avatar” takes a hit by being ranked near the bottom of too many ballots, I see Bigelow’s film as the true beneficiary, the film that will benefit from being top five on almost every ballot and top two or three on a great many.

One Oscar voter recently told me that he thinks the public outcry will be enormous if “The Hurt Locker” beats “Avatar,” and he may be right. But would the Academy rather face public complaints that they didn’t honor the big moneymaker, or an outcry within the artistic community because they made their decision based on that money?

Back on Aug. 31, the day that The Odds launched, I took a stab in the dark and wrote the following:

“At this point, looking at a landscape of movies I haven’t seen and buzz I don’t trust, I’d suggest that Kathryn Bigelow’s tense little Iraq drama has a damn good chance of being the last film standing come next March 7.”

And you know, I think I’ll stand by those words.

I’ll deal with the other races in the coming days …