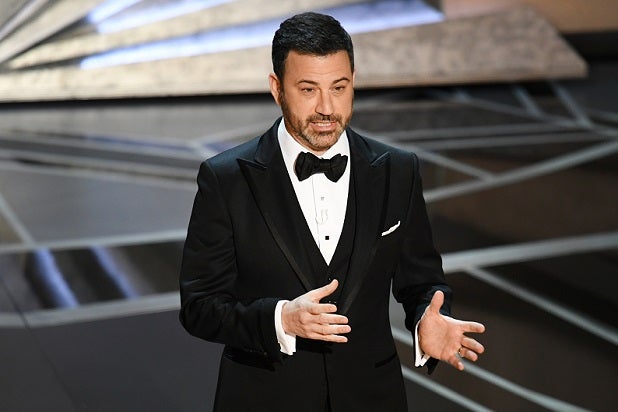 For an Oscars ceremony that weighed in at very nearly four hours, Time’s Up would seem like an unlikely theme. Then again, lots of things have been changing in Hollywood lately.

While “The Shape of Water” was the biggest winner of the night, scoring Best Picture (and a Best Director award for Guillermo del Toro), the night’s biggest presence was the massive shift taking place in the entertainment industry, after sexual misconduct victims rose up en masse last year to tell their stories, and marginalized voices in show business managed to make themselves heard in a big way.

Oscars host Jimmy Kimmel kicked off Sunday night’s ceremony with wisecracks about the sexual harassment epidemic that grabbed headlines last year, as well as the Best Picture flub from last year’s ceremony, which found the Oscar being mistakenly handed to “La La Land” rather than the actual winner, “Moonlight.”

“This year, when you hear your name called, don’t get up right away,” Kimmel said from the stage of the Dolby Theatre.

The “Jimmy Kimmel Live!” host went on to explain the flub, saying that the producers asked him to do some comedy with the accountants charged with keeping track of the winners, and he declined.

“So then the accountants went ahead and did some comedy on their own,” Kimmel cracked.

On the sexual harassment front, Kimmel pointed at that this year Oscar turns 90 this year, noting that he’s a respected figure in the entertainment industry. And why not, Kimmel put forth, looking at an over-sized replica of the statuette on the stage.

“He keeps his hands where you can see them, never says a rude word, and most importantly, no penis at all,” Kimmel joked.

“Here’s how clueless Hollywood is about women,” Kimmel continued. “We made a movie called ‘What Women Want,’ and it starred Mel Gibson.”

In addition to Kimmel’s opening monologue, the presentations and acceptance speeches during Sunday’s ceremony were peppered with social and political commentary, some sly and fleeting, some heavy-handed. Accepting for Best Animated Short for “Dear Basketball,” NBA legend Kobe Bryant took a shot at Fox News personality Laura Ingraham, who recently criticized outspoken athletes.

Likewise, while performing the song “Stand Up for Something,” from the film “Marshall,” with Andra Day, Common called out the National Rifle Association during the intro, rapping, “Tell the NRA they in God’s way.”

The evening also served up a heavy nod to the #MeToo and #Time’sUp movements, via a video segment featuring Harvey Weinstein accuser Mira Sorvino, Lee Daniels. Ava DuVernay, Greta Gerwig, Salma Hayek , Sarah Silverman, Geena Davis, and others touting the changing tides in Hollywood and the virtues of inclusion.

“We’re here, and we’re not going anywhere,” Daniels said in the segment.

In an emotional acceptance speech in the Best Actress category for “Three Billboards Outside Ebbing, Missouri,” Frances McDormand asked the night’s female nominees and winners to stand with her and wound up her speech with, “I have two words to leave you with tonight, ladies and gentlemen: Inclusion rider.”

This year’s big stunt, a la Ellen DeGeneres’ pizza-ordering gag of yore, featured Kimmel, Mark Hamill, Armie Hammer and others paying tribute to moviegoers by interrupting a screening of “A Wrinkle in Time” in the theater across the street to serve up “some goodies” to the audience, including hot dogs served up from a hot dog cannon shaped like (what else?) a giant hot dog.

Kimmel also offered a random theater-goer, Mike Young, the opportunity to announce the next presenters. Enjoy your 15 minutes while they last; clock’s ticking, and as was noted throughout the night, the theme of the era is time’s up.