Oscar show co-producer Adam Shankman says that this year’s Academy Awards will not have a third host, and that there’s no way they’ll feature 500 dancers on the stage of the Kodak Theater.

But yes, there will be dancing – although not, he promises, during the song “The Weary Kind,” should that understated folk ballad from "Crazy Heart" receive an Oscar nomination.

Shankman made the comments Friday afternoon at CenterStaging in Burbank, where hundreds of hopeful dancers showed up in the rain to audition for the Oscar show.  Shankman himself danced on the Academy Awards telecast 20 years ago. (Below: Shankman, center, with Travis Wall and Jamal Sims. Photo by Kevin Winter/Getty Images) 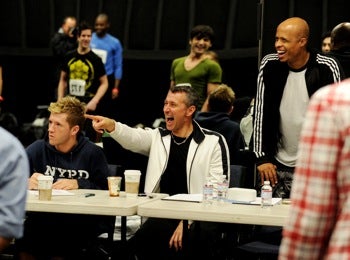 During a break in the full day of auditions, the producer told theWrap that Thursday’s Deadline Hollywood report that the show was considering adding a third host to supplement Steve Martin and Alec Baldwin was without foundation.

“Absolutely not,” he said. “I don’t know where that came from, but it’s not happening.”

Then he laughed. “But I did get a funny text from Neil Patrick Harris just a few minutes ago.” He pulled out his phone, located the message, and read: “Why is there some weird rumor circulating that I’m going to be the third Oscar host?’

Shankman said that he texted back, “Aren’t you?”  But, he says, neither Harris nor anybody else will be added to the roster of hosts.

When it comes to another recent rumor, that one planned musical number would involve 500 dancers, Shankman laughed and said he knew where that one came from.

“I made a joke about it to bother my line producer, and somebody in the room must have taken it seriously,” he says. “But there’s no room for 500 dancers on that stage. There’s not even room on that whole floor of the theater.”

Other news about the show from Shankman:

It will include dance numbers, but he wants to assure naysayers that those numbers “will organically grow out of the show.”

If any of the nominated songs “ask for a musical number,” then in the four weeks between nominations and the Oscar show “it’s going to be a scramble” to get that number together.

If “The Weary Kind” from “Crazy Heart” receives a nomination, he absolutely will not choreograph a dance routine to go with it.

He’s not asking Steve Martin or Alec Baldwin to sing or dance.

And he is asking Martin and Baldwin to take over the introductions to some categories, cutting down on the amount of banter from presenters.

For Shankman, the process had an element of déjà vu to it: he himself won a job as a dancer on the 1990 by auditioning for that show’s choreographer, Paula Abdul.

“I was so intimidated by Paula, who was at the peak of her career then,” he said. “I did okay in the audition, but I didn’t kill it until the very end. I knew it was my last chance so I did a bunch of tricks I didn’t know I could do.”

He laughed. “I threw a tumbling pass that I had never done before, and knew I would never be able to do again.”

Shankman wasn’t asking for tumbling from the dancers auditioning on Friday. At first, he just wanted to see a basic move. (Well, it’s basic if you’re the kind who can do a double pirouette into an arabesque.) About half the auditioners did that one well enough to move on to the next round, where they were taught a short routine and asked to perform it in groups of five, dancing to music from Shankman’s own iPod. (NeYo’s "Closer" for the pirouettes, John Mayer’s "Say What You Need to Say" for the female routine.) 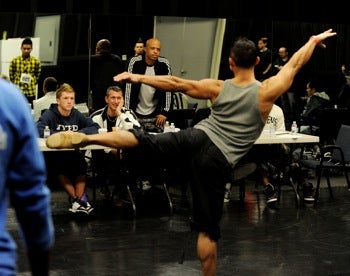 The dancers performed under the watchful gaze of Shankman, associate choreographers Jamal Sims and Anne Fletcher, and some of the dancers from the last season of “So You Think You Can Dance,” on which the Oscar producer serves as a judge. (Photo: Kevin Winter/Getty Images)

The others occasionally passed Shankman notes during the auditions: as one extremely tall female dancer performed, the producer grinned at the scrawled question, “Can we keep Avatar?”

Two or three dancers from most of those groups were asked to call-backs, though in a couple of cases Shankman took the entire group: “I’m taking you all!” he shouted to one batch of women, breaking into a big grin. “Go get your wristbands, and get your asses out of my face!”

When something went wrong, he frowned. “That one took me right to the bummer tent.”

Shankman, who admits he’s having budget fights with the Academy about the number of dancers he can hire, said he was looking for basic technical skills, but also for dancers who feel the music the way he does, and “who seem like they can fit into the show.”

As for exactly what kind of numbers they’d be fitting into … for now, that remains a mystery.