Newspapers across the nation are leading today’s edition with coverage of Sunday’s Oscars, at which “Spotlight” won the Academy Award for Best Picture.

“Spotlight” is the story of how the Boston Globe uncovered the scandal of child molestation and cover-up within the Catholic Church, so would The Globe take advantage of the opportunity with a humble brag? Well, The Globe took out a full-page ad n page A3 thanking “all who had a hand in creating this important film.”

The story also grace’s today’s cover with the simple headline: “The Oscar Shines on ‘Spotlight.'”

The story continues on page B10, leading with “The Oscars came home to Boston” before morphing into a roundup of all the evening’s winners. The Globe has separate articles about red carpet fashion, the race controversy and Chris Rock‘s monologue.

The digital version of The Globe has a link to the 2002 story on which ‘Spotlight’ was based.

Check out the ad here and the cover below: 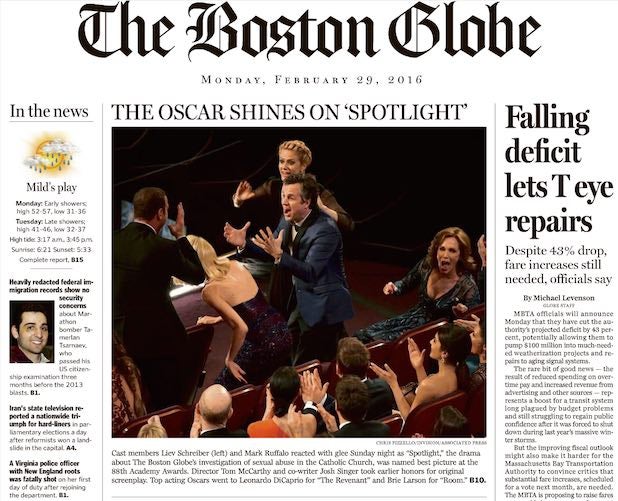