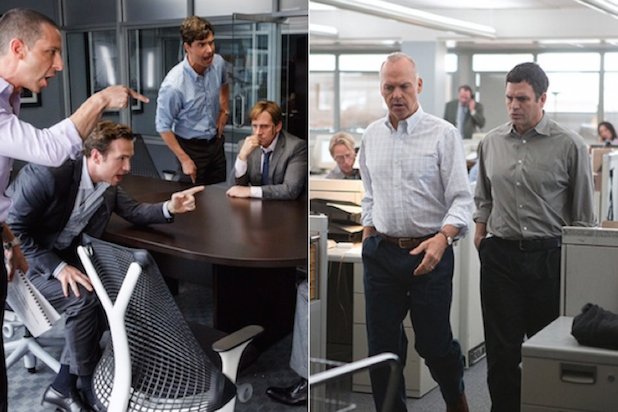 Open Road’s “Spotlight” and Paramount’s “The Big Short” asserted their frontrunner status in tonight’s Best Picture race by winning their respective screenplay awards at the Oscars.

Josh Singer and director Tom McCarthy won best original screenplay for “Spotlight,” which examines the Catholic Church sex abuse scandal from the point of view of the Boston Globe reporters who uncovered it.

When McCarthy and Singer went backstage to the press room, something fell from the ceiling, prompting McCarthy to joke “That was the Catholic Church, ladies and gentlemen. Thank god we are protected by Oscars!”

Meanwhile, Charles Randolph and director Adam McKay won best adapted screenplay for “The Big Short,” based on the book by Michael Lewis that examines the housing bubble collapse of the mid-2000s.

“Spotlight” and “The Big Short” each won WGA Awards earlier this month and were expected to win at the Oscars. Had they not won, the setback would’ve indicated a threat to their Best Picture positions. The victories indicate that Best Picture will indeed be a tight race, with the screenplay winners competing against “The Revenant,” which is favored over both films in the best director category.

The win for “Spotlight” meant that Universal’s “Straight Outta Compton” was shut out at the Oscars, as the film’s only nomination was for its original screenplay, credited to four white writers.

“Spotlight” is up for five more Oscars, while “The Big Short” is up for four. In addition to best picture and director, the films are also competing in the supporting actor and editing categories.