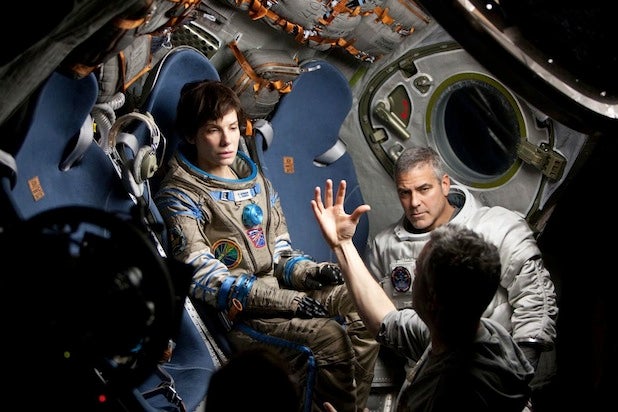 Warner Bros. was the biggest winner Sunday night at the Oscars, claiming ten awards – more than every other major studio combined.

It won seven awards for “Gravity” — which won more Oscars than any other film — including the prize for Best Director.

Warner Bros. also won one for “Her,” Spike Jonze‘s tale of a man who falls in love with his operating system, and a pair for “The Great Gatsby,” Baz Luhrmann’s adaptation of F. Scott Fitzgerald’s novel. Thanks to “Great Gatsby,” it won two awards for a movie critics dismissed upon its release in May.

Cynics will note Warner Bros. left “Gravity” in development for years before enabling Alfonso Cuaron to deliver his vision. Cuaron joked about this fact at the awards.

Such stories are common in Hollywood, where risk-averse executives go for the “safe” choice over the one that can deliver unexpected results. Yet this serves as another reminder that the occasional leap of faith in a supremely-talented individual can work out well for studios, and it is one reason Warner Bros. and Sony have fared well at the Oscars in recent years.

The same could be said of producer Megan Ellison, who has financed award-winning films later released by studios, including “Her,” “American Hustle,” and “Zero Dark Thirty.”

It was only a couple of years ago that people questioned whether Harvey Weinstein had the Oscars in his back pocket. His company won Best Picture two years in a row for “The Artist” and “The King’s Speech,” just two of many shows in which specialty distributors like Focus Features, Fox Searchlight and Weinstein’s Miramax have squirreled away many of the awards.

Yet studios have fared very well in the past couple of years, none more so than the 81-year-old Burbank studio. Warner Bros. won Best Picture last year for “Argo,” directed by another studio favorite — Ben Affleck.

Warner Bros. didn’t win that big prize this year, but ten Oscars will ease the pain.