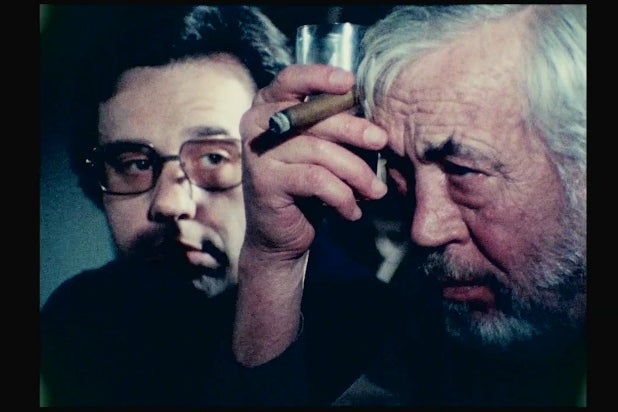 Cyril Connolly famously noted that “whom the gods wish to destroy, they first call promising,” an observation Orson Welles fought his whole post-“Citizen Kane” life. But Welles’ legend as one of cinema’s true geniuses — and most fervid champions of its worth as art — is also such that when he leaves enough footage behind from an unfulfilled project, others are only too eager to see it through, to celebrate him anew. Even 40 years later.

“The Other Side of the Wind,” which Welles filmed between 1970 and 1976, and built around a riotous, revealing 70th birthday party for an exiled filmmaker (John Huston) engineering a comeback, was always the unfinished work most likely to see fruition. Now, thanks to producers Frank Marshall (who worked on the initial shoot) and Filip Van Rymsza, Peter Bogdanovich (one of the movie’s co-stars), and editor Bob Murawski (“The Hurt Locker”), there’s a completed version of “The Other Side of the Wind,” and the result is a fascinating sprawl of technique, chaos, personality and legacy.

In its barbs and visuals, indie vibe and old-school ambition, inside jabs and outsider artistry, it feels both of its time — when Welles’ cachet straddled an old guard who shunned him and young rebels who worshiped him — and like an acidly spit anecdote about artistic humiliation that still feels relevant.

If it’s unlikely to compete for canon favorite alongside the stalwarts — “Citizen Kane,” “Touch of Evil,” “Chimes at Midnight” — it still stands as a wholly original artistic statement (about making art, no less) from an undisputed master. That it’s emerging via Netflix means you could conceivably watch it on your phone, but if any of the streaming behemoth’s releases merits viewing it on the biggest damn screen, this one’s it, if only for the rapturously tinted, framed, and spliced sex-in-a-Mustang sequence alone, automatically among one of Welles’ most virtuosic.

Of course, the meta-sting to that scene’s kaleidoscopic sizzle is that it’s a spoof: Welles’ lampooning of ’60s art cinema that, in the movie’s film-within-a-film scenario, represents the hoped-for return to prominence of the story’s maverick, hard-drinking, harder-manipulating director Jake Hunnaford, played by Huston in full devil’s gleam.

Even when Welles is in parody mode — turning loose a majestically nude, dusky-hued Oja Kodar (credited as “Wind” co-screenwriter) and boyish hunk Bob Random in stark, color-saturated and surface-reflective urban landscapes straight out of Antonioni (and studio backlots) — he still can’t help but make these consciously abstract images some of the most dynamic of his career.

The framing device for these glimpses of Hannaford’s unfinished movie (also called “The Other Side of the Wind”) is how Welles takes aim at the filmmaking apparatus that abandoned artists like him, by showing us every altar where directors encounter ruthless judgment: at the studio, where a potential (and unimpressed) backer screens the unfinished film; then at Hunnaford’s party, where privately shown footage allows Hollywood cognoscenti to play critic; and finally — in the last scene, projected at a drive-in — which represents that ultimate arbiter, movie audiences.

The always-rolling cameras — often seen (including cinematographer Gary Graver’s), and filming both in black & white and color — show the main story, whether capturing open revelry or behind-doors recriminations.

(If you needed any more proof Welles dreamed ahead of his time, the concept of a relentlessly recorded life for all to see predates the smartphone age/found-footage genre by decades.)

The central tension, though, played out in tart exchanges reminiscent of Welles’ distinctive way with dialogue, is between the hyper-macho Hannaford and Bogdanovich’s preening Brooks Otterlake, an acolyte turned hotshot filmmaker whose eclipsing of his mentor — deliberately mirroring Welles’ own fraught friendship with Bogdanovich — is presented as a betrayal. And there’s plenty of tingly fun in watching two iconic filmmakers, each with cred as actors, play versions of themselves.

Also Read: Here's Everything Coming to and Leaving Netflix in November

But there are also suggestions in Hannaford’s makeup of long-buried attraction to his leading men over the years, a detail given an expectedly dated melodramatic flourish, but which nonetheless speaks to the psychological complexity Welles saw not just in masculine possessiveness, but also in the relationship between directors and everybody else.

“The Other Side of the Wind” doesn’t always justify its scattershot, guerrilla-Fellini style. The doc-inspired construct loses steam, while the skin-and-stares burlesque with Kodar and Random tips into symbolic (scissors, meet phallus) absurdity. Michel Legrand’s new, jazzy score makes for a percolating accompaniment, but considering the up-and-down nature of the dialogue tracks — heroically assembled from sources of varying quality by the sound team — the score’s sonic faultlessness is more jarring for not feeling integrated.

Yet it’s still something of a miracle that we get to see what amounts to a new film from an all-time great. As a vinegary clapback against an industry he loved and hated, “Wind” is a truly kinetic dispatch from a giant in twilight, and, in keeping with Welles’ oeuvre, another inventively realized, no-holds-barred investigation of a complicated man and the environment that made him. How much of it is autobiography should make for spirited debate, but it’s safe to say that if Welles was never going to top “Kane,” we now at least have a final film worthy of being called an ideal bookend.