Much has been made over the fact that Sandra Bullock‘s character in “Our Brand Is Crisis” — a high-strung political consultant called out of semi-retirement to consult on a Bolivian presidential election — was originally written to be played by a man, but one suspects that the male version was never called upon to perform as many “Miss Congeniality”-style pratfalls.

Bullock’s reprise of her old greatest-hits collection aside, “Our Brand Is Crisis,” inspired by the 2005 documentary of the same name, never finds its own footing, either. Much of what the film considers fodder for satire, like the notion that selling a candidate is just like selling cat food, is too familiar to feel revelatory or shocking, while characters that start out believable behave in unrecognizably ludicrous ways simply because the script forces them to.

See Video: Sandra Bullock Pulls Off an Upset in First 'Our Brand Is Crisis' Trailer

Bullock stars as “Calamity” Jane Bodine, a superstar political consultant fried by a string of losing campaigns and living in seclusion, skulking around a cabin and making pottery. She gets dragged back intoby Nell (Ann Dowd) and Ben (Anthony Mackie) who entice her to join their team of operatives in Bolivia, where former president Castillo (Joaquim de Almeida, “Fast Five”) is 20 points behind in the polls in his attempt to reclaim the executive office.

Needing both barf bags and an oxygen tank to get her to La Paz, Jane comes off the plane looking bedraggled and out of it, but she soon volleys enough to figure out the underlying problem of Castillo’s campaign. The candidate is elitist, out-of-touch and obnoxious, but rather than try to fix him, Jane realizes it makes more sense to change the conversation: Things are bad, and the times are critical, and the country needs an unlikable tough guy to fix things. The campaign’s brand, she decides, is crisis.

See Video: Sandra Bullock, Anthony Mackie Admit to Lying to Police During 'Never Have I Ever' on 'Ellen' 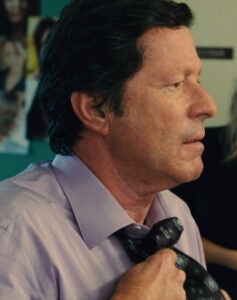 So far, so good, especially when it turns out that Jane’s longtime rival (and onetime lover) Pat Candy (Billy Bob Thornton) is running the campaign for Castillo’s most notable opponent. As the gringos play mind games — not to mention a series of escalating, nasty pranks — on each other, the horserace is on.

If this were a movie that wanted to be a realistic portrait of people who do dirty work and have no illusions about their jobs, “Crisis” might have had some salient points to make about political theater. (Think of the scene in “Broadcast News” where the reporters lob ethical challenges at each other, and none of them have any qualms about duplicity or shortcuts.) But no, modern audiences aren’t attuned to honest larceny, so instead we have to watch Jane pretend that she doesn’t care about the implications of her work until, uh-oh, she cares so very much.

The screenplay also throws in a sacrificial lamb: Eddie (Reynaldo Pacheco, “Beginners”), who was held as a baby by Castillo, completely (and naively) throws in his lot until a betrayal sequence that’s so overdone and unrealistically timed that the movie might as well show the candidate tying someone to a railroad track.

It’s hard to fit the film inside the oeuvre of David Gordon Green, mainly because he’s spent his career defying labels, having given us everything from the poetic “George Washington” to the rowdy and bawdy “Pineapple Express.” Sadly, it’s all too easy to recognize the handiwork of screenwriter Peter Straughan and producers George Clooney and Grant Heslov, who previously collaborated on the similarly unfunny and heavy-handed “The Men Who Stare at Goats,” another film that sought to score political points at the expense of characterization, comedy and coherence.

Bullock, to her credit, commits to the role, even with all of its weird contradictions and out-of-nowhere reversals, while Thornton unsurprisingly summons the spirit of James Carville, who was one of the main players in the “Our Brand Is Crisis” documentary. (Thornton previously played the Carville surrogate in the “Primary Colors” movie as well.) Zoe Kazan, perhaps because she’s playing the character least conflicted about her own nefarious deeds, steals every scene she has as Bullock’s shadowy aide-de-camp.

Even a better political satire would have a hard time keeping up with the bizarrely eccentric vaudeville currently taking place on cable news, but “Our Brand Is Crisis” can’t even come close.