When Dima (Stellan Skarsgård), a voluble Russian oligarch whose beefy body is wallpapered with tattoos, calls Perry (Ewan McGregor), a British professor of poetry whom he has met by chance in Morocco, a “gentleman,” he leaves the slightest of spaces between the word’s two halves. Perry is indeed proper and honorable, quick to rush to the rescue of a damsel in distress. But he’s also soft, sheltered, unchallenged. If freedom has a cost, he has never paid it.

Perry — whose surname, in case teaching poetry for a living wasn’t a strong enough indicator of his milquetoast character, is Makepeace — gets a chance to make a contribution beyond schooling undergrads on “The Waste Land” when Dima, who’s deeply involved in laundering money for the Russian mafia, asks him to carry a flash drive back to the U.K. and hand it over to MI-6. With his new boss, known as the Prince, killing off his associates one by one, Dima, who looks to have little previous relationship with fear, is scared for both his and his family’s lives, and cooperating with the British government seems the best of a slew of bad options.

At this point, “Our Kind of Traitor,” adapted from a 2010 novel by John le Carré, has two options: Either Perry takes the drive because he’s clueless and thinks it’s no big deal, or he suspects it is and does it for the thrill. (There’s a third option, where Perry thinks better of the whole thing and declines Dima’s request, but that movie is 10 minutes long and not very good.) It’s the moment where you, as a viewer, buy into the movie or you don’t. And “Our Kind of Traitor” kind of whiffs it. 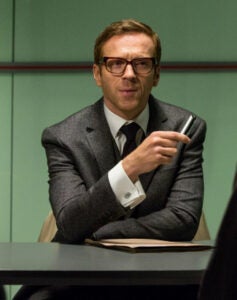 The problem, at root, is McGregor, whose rough and tumble mien is a rough fit for the part of a pleasantly spineless academic who lives high on his barrister wife’s salary. Not Arnold Schwarzenegger-as-the-nebbishy-hero-of-“Total Recall” wrong, but enough that when he and Dima take to the tennis court, and Perry keeps whacking balls into the net, you start to wonder if he’s faking it.

It’s a sketchily written part to begin with, a grey and gristly scrap next to the generous hunk of rare meat Skarsgård has been given to gnaw on, and it needs a star’s presence to fill it out — or rather a non-star’s, someone like Philip Seymour Hoffman in “A Most Wanted Man,” where the character seemed bent double by the weight of his own moral collapse. McGregor mainly seems puzzled, like a man who walks into a room and can’t remember what he came in for.

Needless to say, Perry’s plan to drop off his memory-stick MacGuffin at Heathrow and make it back in time for his afternoon seminar does not go as planned. He draws the suspicion of a brooding British agent named Hector, played by Damian Lewis, wearing stoutly framed glasses that focus his glare like the rays of the sun. (Perry is the ant.) He’s soon convinced that Perry is too dull to be anything other than what he says — to quote “The Untouchables,” “Who would claim to be that who was not?” — and since MI6 is rather short on agents these days, perhaps Perry and his wife, Gail (Naomie Harris) could help out with a bit of spycraft, wot wot? If you didn’t jump off the train when Perry accepted Dima’s offer in the first place, now may be the point at which you reconsider your decision.

Elaborate schemes are worked out for Dima to provide evidence against the Prince before his boss exercises his unnerving habit of executing his former allies in an attempt to redirect his assets to more legitimate — which is to say, less obviously illegal — ends in the banking world. Dima and his family cart a pair of young girls around with them, the orphans of one of the Prince’s assassinations, partly as a matter of kindness, but also, it seems, as a prop. Do you want my children to end up like that? Dima asks Perry. Or dead themselves? Skarsgård is canny enough to show us a man who’s genuinely desperate and afraid for his family, and he is also aware that playing up that desperation is the best way to manipulate his poetry-loving patsy into doing what he wants him to do.

Also Read: Naomie Harris to Star in 'The Personal History of Rachel Dupree'

Director Susanna White (“Nanny McPhee Returns”), and especially cinematographer Anthony Dod Mantle, at least give “Our Kind of Traitor” a distinctive look, awash in poisoned greens, the camera poking in at odd angles, suggesting the extent to which everyone is always being watched. But it’s a chilly thing, made more difficult by the increasingly preposterous contortions that Hossein Amini’s script has to make to keep Perry and Ga‘t help either that the film is opening at a time when the free flow of capital across the U.K.’s borders is very much in question.)

If “Our Kind of Traitor” were more of a juicy genre piece, its implausibilities wouldn’t matter a whit, but when there’s no ride to go along for, you spend a lot more time thinking about the journey.

This Michelangelo Antonioni film starred David Hemmings as a photographer who discovers the clues to a potential murder in the photos he took of a beautiful woman.