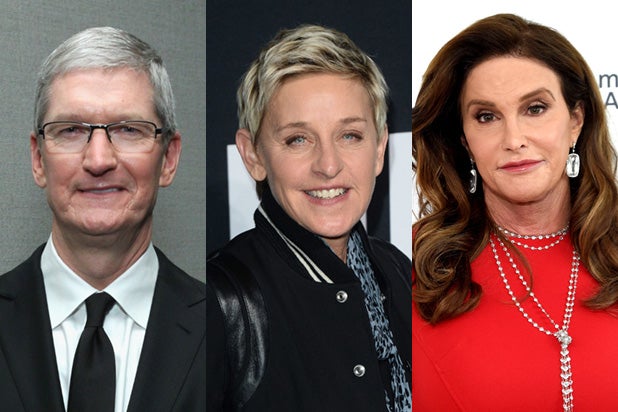 For the second year in a row, Apple CEO Tim Cook has topped Out magazine’s Power List of the most influential LGBT people in America.

The announcement comes about a week after Apple’s statement on Mississippi’s “religious freedom” bill, which has been widely criticized for allowing businesses to deny serving LGBT residents. In the statement, the tech giant said the bill “empowers discrimination.”

Other Hollywood stars who made the list include “Drag Race” host RuPaul Charles, Bravo’s Andy Cohen, actor Zachary Quinto and “The Matrix” directors Lana and Lilly Wachowski. Lilly Wachowski recently made headlines when she came out as transgender after a tabloid threatened to expose her.

Caitlyn Jenner, who came out as trans in an interview last year and now stars in her own E! docu-series “I Am Cait,” appears on the list for the first time this year, coming it at No. 8. Other newcomers include “Transparent” creator Jill Soloway” at 25, “Empire” star Jussie Smollett at 28, “Saturday Night Live’s” Kate McKinnon at 31 and YouTube star Tyler Oakley at 48.