Following their near-death experience at the end of “Outer Banks” Season 1, John B (Chase Stokes) and Sarah (Madelyn Cline) are soaking up the rays in the Bahamas and enjoying some quality time together. Sure, that time is spent on the run, but that’s what you get when you’re teen fugitives on an unplanned vacay in a foreign country.

In the Season 2 trailer for “Outer Banks,” which you can view via the video above, John B and Sarah have a brief moment to celebrate the fact they are still alive and together having reached the Bahamas after that crazy storm in the Season 1 finale. And then it’s right on to running and hiding to avoid being spotted due to the warrant out for their arrest.

(For those who need a quick refresher about why our young lovers are wanted: John B was accused of a murder he didn’t commit and Sarah’s father, Wade, played by Charles Esten, stole all the gold John B’s late father had spent his life searching for. John B and Sarah left on a boat together and made it through a wild storm OK — unbeknownst to their friends and family back home in the Outer Banks — and were rescued at sea by a boat crew that just so happened to be heading to The Bahamas, a.k.a. the place Wade sent all of the treasure.) 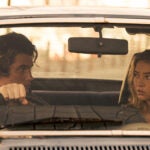 The trailer also shows us what the other Pogues are up to back in the Outer Banks, as Kiara (Madison Bailey), Pope (Jonathan Daviss), and JJ (Rudy Pankow) decide to claim the treasure for themselves in honor of John B and Sarah — who they don’t even know survived.

Per Netflix, “Outer Banks” is a coming-of-age story that follows a tight-knit group of local teens (the “Pogues”) in the beach vacation destination of the Outer Banks of North Carolina. After their near-death escape, Season Two finds John B & Sarah on the run – and in over their heads – in the Bahamas. New friends also bring new foes as they’re back on the trail of the gold, while the stakes for Kiara, Pope, and JJ rapidly escalate at home. The $400M is still in the game, but will the uncovering of a newfound secret reunite the group for a fresh mission? The adventure of a lifetime awaits, but uncharted waters ahead mean our Pogues must do all they can to make it out alive.