Starz just delivered a very special present to “Outlander” fans in time for Christmas — a Jamie and Claire scene from Season 6.

In the clip, which you can unwrap now by watching in the player above, Jamie Fraser (Sam Heughan) and Claire Randall Fraser (Caitriona Balfe) discuss someone new coming to Fraser’s Ridge, a perosn whom Jamie spent time with when he was in Ardsmuir Prison after being captured by the English for his role in the Jacobite Rebellion in 1745.

It is while reflecting on his time in the brutal jail that Jamie tells Claire she would come to him (in visions) to keep him going when he was in the awful place (and while she was 200 years ahead in history, raising their daughter Brianna).

“Sometimes, I think you’re an angel,” he says in the tender scene between the husband and wife. 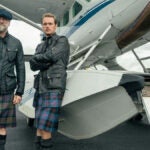 It’s likely the person Jamie is referring to is Tom Christie (Mark Lewis-Jones) who spent time at Ardsmuir with Jamie.

Season 6 will see Claire (Balfe) and Jamie (Heughan) continue to “fight to protect those they love, as they navigate the trials and tribulations of life in colonial America,” per Starz.

The season will pick up where the last one left off, and will see the couple and their family and friends, “strive to maintain peace and flourish within a society that – as Claire knows all too well – is unwittingly marching toward Revolution. Against this backdrop, which heralds the birth of the new American nation, Claire and Jamie have built a home together at Fraser’s Ridge. They must now defend this home – established on land granted to them by the Crown – not only from external forces, but also from the increasing strife and conflict in the community within their care,” a logline read. 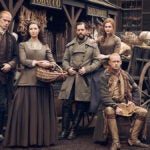