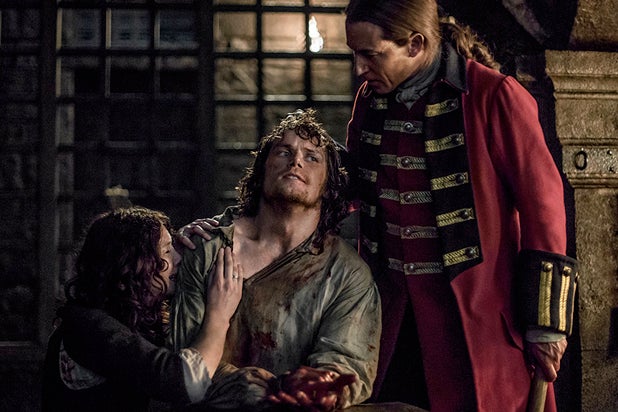 “Outlander” took Sam Heughan‘s character Jamie Fraser to some dark places in its first season, but the actor relished the challenge.

The brutal sexual assault of Jamie by Black Jack Randall (Tobias Menzies) played out in discomfiting detail on screen. It was the season’s darkest scene, by a long shot, but Heughan believes it was necessary and not gratuitous.

“We didn’t want to do something that was graphic or hard to watch,” he told TheWrap. “It was about understanding what Jamie’s gone through so we know where he is the rest of the season and subsequent seasons.”

On top of answering TheWrap’s Emmy Contender Quickie questions, Heughan detailed his experience filming the controversial sexual assault scenes, what it’s been like returning to film the show’s second season amid Emmy buzz, and why Season 2 feels like a very different show from Season 1.

Sexual assault being depicted on TV has been a hot button issue lately. “Game of Thrones” had aired its controversial episode before the “Outlander” finale. Did that make you guys nervous about what you were doing and was there ever any discussion of changing or toning things down?
I was aware that they had done that episode, I finally caught up with it. I enjoyed the episode, I’m a big fan of the show, and it was interesting what they did with it. Playing the whole thing off someone’s face — off Reek’s face — was really clever.

We were very aware of what we were doing. We spent a lot of time rehearsing it, discussing what we want the audience to see and to feel. The writers and directors were heavily involved. And I know [showunner] Ron [Moore], in the edit, he’s got a great sense of taste and didn’t want to show more than he was comfortable with watching. And certainly we were the same. We didn’t want to do something that was graphic or hard to watch. It was about understanding what Jamie’s gone through so we know where he is the rest of the season and subsequent seasons.

Ultimately that episode, for us, was not just about being raped. It was about the torture beforehand, it was about this mental chess game that they’re playing, and then obviously this horrific thing that happens to Jamie, but also afterwards — Jamie, not broken. His body maybe, but his mind isn’t.

That’s what Black Jack Randall sees in Jamie, that he needs to break his mind, he needs to break that resilience that Jamie’s got — and the resilience is his love for Claire . That’s sort of the core of Jamie’s fortitude and strength. That’s what makes it really interesting, I think. Just having a rape is certainly not interesting for anyone. It’s more about the mental battles going on between these men.

But it was also important that we dealt with that subject in a careful way, so the aftermath of what happens to Jamie, how he recovers from that or doesn’t recover from it. Yeah, it’s pretty tough material.

What sort of response have you gotten from viewers about those scenes?
The reaction has been better than we could have ever imagined. I was certainly a little nervous about seeing what people thought of it. We’ve had just really positive reaction from everyone. And there have also been people who have suffered — former or been through similar circumstances and they’ve said the portrayal was accurate and I think that’s what we can hope for, that people think that it’s authentic.

In terms of the Emmy and awards buzz for the show, what has that been like? When did you guys realize the show was beloved by both fans and critics?
I still don’t know if that’s true or not. I don’t really understand it all, and you certainly don’t think about that when you’re shooting. If the show were to receive any sort of recognition we would be over the moon and delighted, especially for our first season and being a new show. I would love for the show to win something, but we’ve won a lot of fan awards and that’s ultimately all we can ask for. That the fans enjoy it and people keep tuning in and word of mouth spreads and the show builds its fanbase. But yeah, send us all your Ginger Awards, that would be lovely.

What’s it been like going back to do Season 2?
I was definitely very, very excited — we all were — to come back to the show. It feels like an old family and everyone’s there, but it feels familiar, which is wonderful. But it’s also different because the show has grown, we’ve moved locations, obviously, the story’s moved to France. And there’s all these things that happened at the end of the season that affects our characters and relationships. So coming back has been very interesting and sort of unsettling but also welcome.

It’s all playing into the show. It’s very much about the characters working out where they are in this world, with all this new information they’ve found out about Claire being pregnant, and what happened to Jamie and the trauma. So yeah, I don’t really know quite where they will end up, it’s very exciting. It’s just a completely different story.

So how’s filming been going? What episode are you on?
We’re almost finished — we’ve been filming three episodes at the same time, the first three, so that’s had its own difficulties, but it’s been great. It’s a very different world. We’re in the French court, about as far as you can get from the highlands of Scotland. There’s some crazy new characters. It looks magnificent, the show looks incredible, and just trying to find where Jamie and Claire fit into that world, is exactly the kind of journey they’re having. They’ve escaped Scotland and everything that happened there, but the reason that they’re there in France is to stop Cullodon, which is this big battle which ends up with the extermination of the highland culture, so they’re there for a reason. Yeah, it just gets very complicated.

Have you filmed any amazing scenes yet or are there any that you’re looking forward to filming?
We have. We were shooting up on the East Coast of Scotland, which doubled for the French sea court, and it’s pretty much the opening of the show in Season 2. There’s some incredible location work, we had lots of boats there and the French harbor… We’ve got some terrific French cast, lots of French actors, some quite famous, are in the show. It just feels very different. It feels like an epic sort of journey that we’re on,on the show. It’s such n interesting time period too. The end of 1744, 1745, so it’s a really interesting time, we’re so close to revolution. Yeah, it’s been great.