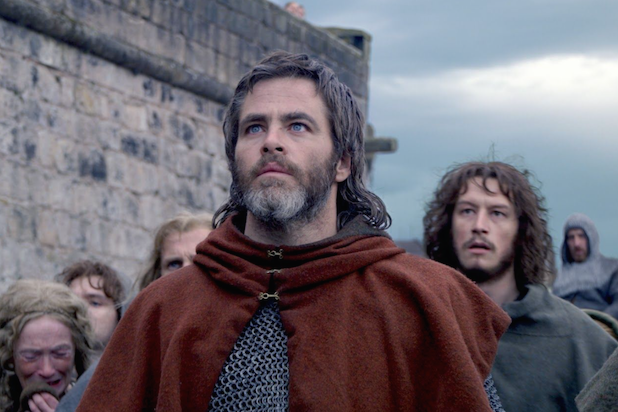 Before introducing the director of this year’s opening night film at TIFF, festival artistic director Cameron Bailey said his group is always looking for “filmmaking craft which shows just what big screen filmmaking can do.”

The audience got that and then some with David Mackenzie’s bursting-at-the-seems Scottish war epic “Outlaw King,” which stars Chris Pine and played for the first time ever at Toronto’s Princess of Wales Theater.

Pine stars as Robert the Bruce, the historic warrior-king who helped wrestle the crown of Scotland from British control and establish the country as independent in the 1300s. To Americans, Robert the Bruce is probably most famous for being played by Angus Macfadyen in Mel Gibson’s Oscar-winning William Wallace biopic “Braveheart,” and yes “Outlaw King” repays the favor by also featuring Wallace as a character. This is notable because you’re sure to hear a lot of comparisons of the films from viewers, and perhaps the streamer’s own marketing department.

Pine is in his strapping movie star-glory in “Outlaw,” all toothy-grins and horseback hero shots as he interacts with a massive ensemble of dogged soldiers (Golden Globe winner Aaron Taylor Johnson, notably) and a formidable love interest in Florence Pugh (the 2016 breakout star of indie “Lady Macbeth”).

At first called to help stabilize the country’s leadership, after England’s Edward I starts aggressively skimming taxes from the nobility and flexing his control over the neighboring region, Pine’s Bruce galvanizes his countrymen to become their defacto King of the Scots. Thus launches an endless parade of bloody battles to take back the motherland.

Pine and Mackenzie previously collaborated to dazzling effect on the blue collar heist thriller “Hell or High Water,” about family, class and American masculinity. There is no such nuance in “Outlaw,” as the men go 120mph to sell you an earnest love story, rousing patriotic drama, bloody “Game of Thrones” savagery and even satirical humor.

Seriously. The film got several big laughs at the premiere screening that so bordered on satire we were half expecting it to devolve into an episode of “Family Guy.”

“Where the f–k have you been? You said three weeks, it’s been four months,” one feisty redheaded Scottish wife says to her solider husband, snapping him with a tea towel when he returns home from a long tour.

Another laughable but somehow poignant moment was the wedding night of Pine and Pugh. His bride is a gift from a prominent military family as a symbol of faith in their renegade King. Though Pugh is hardly a damsel and vibrates with a kind of modern independence, Pine leaves her bedroom without insisting on consummating their marriage. Even she seems confused.

“Have a good night,” he says, walking off to laughs from the Princess of Wales. He wakes the next morning in his own room, cuddling his dog. A fellow general wakes him and says, “you’re in bed with the wrong bitch.”

It’s whiplash tonal change, and feels like it may have been done to open the film up to different kinds of audiences. It felt bitter in the moments after, though, considering that contemporary content depicts these exact medieval marital rituals as nightmares of rape and violence.

Speaking of, “Outlaw King” chooses some odd moments for jarring depictions of gore. Historically accurate as they may be, the battles of Robert the Bruce are shot and scored as triumphant. They feel rewarding, until suddenly a detractor is disemboweled at close range. Another scene, where a Pine follower is confessing to a betrayal, ends in a brutal killing despite the table being set for healing or forgiveness.

Whatever your take, the film boasts gorgeous cinematography from DP Barry Ackroyd, who makes the most of lush green locations and dank battle scenes (probably making the most of that Netflix production budget, too).

No one has more fun here than Pine, empowered to be a lover and a fighter and a war hero. He’s so at home in the character, he even makes the rare male movie star leap to go full frontal while bathing in the trenches. “Outlaw King,” indeed.