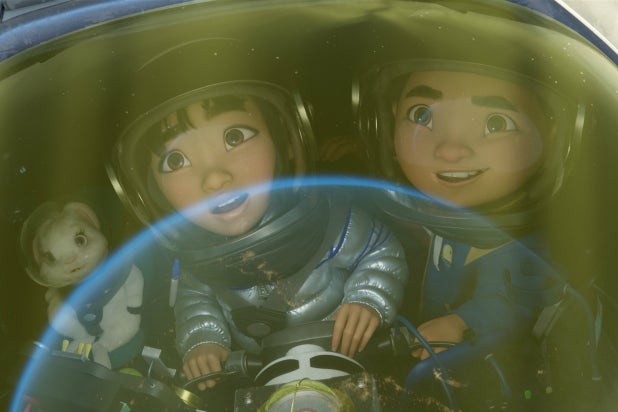 There’s a lovely, original story happening at the edges of “Over the Moon” — literally, the first 20 minutes and the last five — but you can feel the studio notes taking over this musical-comedy-adventure from director Glen Keane, a Disney vet and the Oscar-winning filmmaker behind the short “Dear Basketball.”

The opening sequences are lovely, with our heroine Fei Fei (voiced by Cathy Ang) enraptured as a young girl by her mother’s stories of moon goddess Chang’e and her sadness over her earthbound true love Houyi. Fei Fei’s beloved mom, whose bakery makes the town’s most delicious mooncakes, passes away after falling ill.

A few years later, Fei Fei’s dad (John Cho) plans to marry again (his fiancée, the widowed Mrs. Zhong, is voiced by Sandra Oh), which makes Fei Fei upset. The scientifically-minded teen decides to travel to the moon so she can prove that Chang’e is real, as a way to remind Fei Fei’s father to remain devoted to her mother’s memory.

Watch Video: Animator Glen Keane Reaches for the Stars in Trailer for Netflix's 'Over the Moon'

So far, so good; Keane and his animators switch from CGI animation to more traditional hand-drawn to depict the legend of Chang’e; the opening songs turn out to be the highlight of the work by composing team Christopher Curtis, Marjorie Duffield, and Helen Park; and the mooncakes and festival dinner are some of animation’s most mouth-watering culinary creations this side of the ham in “Ponyo” and the potato-chip fried rice in “Weathering With You.”

But suddenly, you can feel the pivot into cribbing from contemporary animated hits. When Fei Fei sing the film’s big “I want” number, “Rocket to the Moon,” it feels like a hodgepodge of various Disney belt-a-thons (“Let It Go,” “Part of Your World,” “Into the Unknown”), with a little “Papa, Can You Hear Me?” thrown in for good measure. When Fei Fei gets to the moon and meets Chang’e (Phillipa Soo, “Hamilton”), the character seems to take a page from the requisite untrustworthy/disappointing authority figures/celebrities from the Pixar canon. And when Fei Fei encounters the blobby, brightly-colored, personality-free inhabitants of the moon, one is reminded of the many family films of late that feel the need to appropriate the Minions.

What began with genuine heartfelt emotion turns into another madcap “go to the place and get the thing” chase, with Mrs. Zhong’s boisterous son Chin (Robert G. Chiu) tagging along on the expedition, and goofy moon-blob Gobi (Ken Jeong) providing moral support and wisecracks. Animators often observe, correctly, that their form of filmmaking isn’t just for kids, so it’s depressing to watch this movie take a 180 from sweet and relatable to noisy and wacky.

There are still pleasures to be found along the way, from a dazzling pair of moon-based griffins who are part of Chang’e’s menagerie to the gentle lessons (in the screenplay by the late Audrey Wells, “The Hate U Give”) about love and loss and letting go. But for every quiet moment that lands, there’s a flashy musical number or some half-baked character design (the “biker chicks” that are actual chickens are a funnier idea in concept than in execution) that breaks the spell.

It’s great to have an animated female lead that does for science what Belle in “Beauty and the Beast” did for reading, but ultimately, “Over the Moon” wanes more than it waxes.