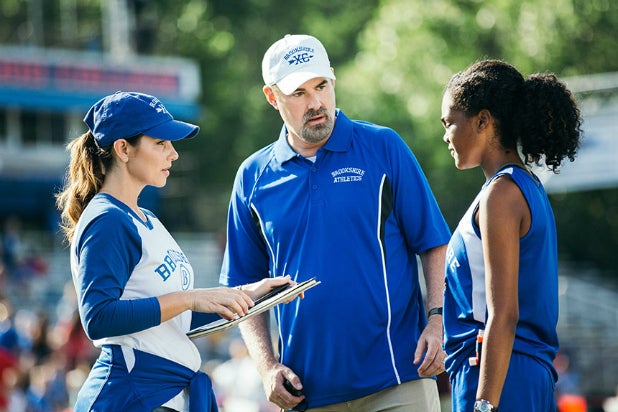 Calling a faith-based release “preachy” could seem redundant, since these productions are designed as vehicles to evangelize. However, even within its spiritual niche, Alex Kendrick’s “Overcomer” shocks for being even more oppressively loquacious than some of its many big-screen cousins.

If every line of stale dialogue landed like a hammer to the head, audiences would walk out victims of blunt-force trauma.

Kendrick, who co-wrote this with brother and perennial collaborator Stephen Kendrick, directs himself as John Harrison, a beloved basketball coach and history teacher at a Christian high school in small-town America. Life’s idyllic until his self-image crumbles after the local plant closes, forcing thousands of blue-collar workers to move elsewhere with their families. Lacking players, John is reassigned to coach the cross-country team, composed of one athlete with asthma: orphaned African American teen Hannah Scott (newcomer Aryn Wright-Thompson).

Bland John (who seems unable to cry given Kendrick’s uncomfortable performance when pouting) sulks over the loss of his professional identity. But upon meeting Thomas (Cameron Arnett), a bed-ridden African American man with lots of regrets but who’s found Christ, John’s priorities shift. Their friendship yields such an abhorrently predictable twist it doesn’t even merit blatantly spoiling it. At school, John, his wife, and the principal rally together not only to help Hannah succeed at running, but also to guide her toward meeting someone from her past and to embrace religion wholeheartedly.

Simply put, “Overcomer” tells the story of a young girl’s indoctrination into Christianity by her devout instructors, who bypass her grandmother’s authority in order to do what they think is best for her, under the pretense of an athletic competition. Heralded by overly victorious music courtesy of Paul Mills (“Indivisible”), Hannah — once a thief and the daughter of drug addicts (seriously?) — walks into a room late in the film to announce, “I am a child of God.” The transformation has been completed.

For a moment, Hannah’s grandmother (Denise Armstrong) comes across as the only person with some sense. She complains about John’s overstepping, but her resolve vanishes quickly when forgiveness comes into play after her arm is twisted by Hannah’s teachers.

Most of the plot and all of the exposition unfolds in lengthy conversations about God. Scene after rambling scene, everyone in front of the camera spells out the script’s messaging with verbose, bold-faced statements that do nothing to improve the overall quality of the cast’s efforts. Overacting runs rampant. Tedium builds up so much that the final race, the ending of which we can all predict, almost ignites excitement, but then even that sequence is slathered with sanctimonious voiceover. What’s never visible, through the monologues and hackneyed one-on-one chats, is a desire to use lighting beyond flat luminosity. Visual delivery matches the insipidness of the material.

Unexpected positives include a couple of sessions of man-to-man openness between John and Thomas (Arnett is the better actor of the two when not drowning in pathos) to discuss personal failures. That macho vulnerability feels refreshing even here and extends to how John’s sons behave. Sure, these kids have probably bought into a pro-life and homophobic agenda, but at least they are encouraging of others and superficially pleasant — so long as those they support have potential to join their flock.

Watch Video: Chrissy Metz on Her Faith-Based Film 'Breakthrough': 'I Really Do Believe in the Power of Prayer'

The meat of the movie’s argument arises from the idea that what you do in this world shouldn’t define who you are, because your intrinsic value is given to you by a higher power. That’d be a laudable message if interpreted as, “every person deserves compassion without judgment no matter what,” but what it truly means is that these folks are Christian first and foremost, and will use that identity to justify their negative perceptions of others.

It’s not them disapproving of your lifestyle; it’s what they’ve learned about what’s bad in the eyes of God that gives them the right to judge you. Conveniently for Kendrick’s latest, his characters are never face-to-face with those that would inspire repulsion. Everyone they interact with is either already on their same Bible-thumping page or on their way there.

In sports, Christian movies find an arena where triumph and defeat can easily be attributed to your relationship with the Lord. If you win, He’s rewarded you; if not, it’s clearly related to insufficient prayer. A rule of thumb to comprehend the mechanics of movies like “Overcomer” is the certainty that the more you’ve suffered, or the worse the offenses you’ve committed are, the more interested God becomes in your prayers. That fetishization of brokenness may come from scripture, but it’s been turned into a tired dramatic engine for movies with little chance of enticing viewers outside their circles.

Those who are watching it have already converted, which is why they bought a ticket. This is a film that’s quite literally preaching to the choir. Patently boring, “Overcomer” makes one long for “Run the Race,” another sports-and-faith-based drama that opened a few months ago; in that case, the filmmakers made an effort to turn their message into a piece of entertainment with noteworthy cinematography and bearable acting. That’s not much, but even that’s missing here.

Imagine if this amount of resources and adamant proselytizing were directed towards advocating for matters of genuine critical importance in this country and globally. One can think of a few.