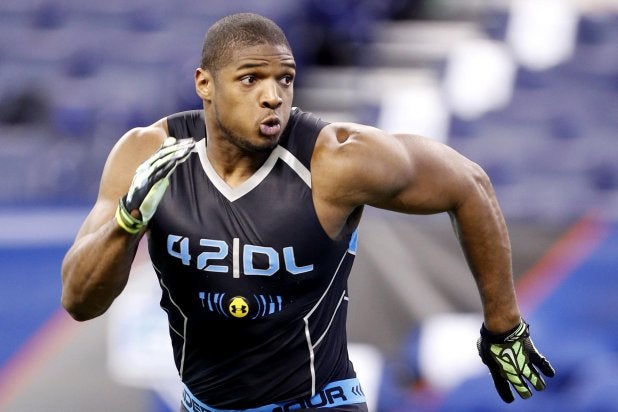 Michael Sam becoming the first openly gay player to get drafted into the NFL was a big deal. It became an even bigger one when he signed with Oprah Winfrey‘s OWN network to film a reality show that follows him through training camp as he tries to get a spot on the St. Louis Rams team. Perhaps too big.

ESPN reported that a player for the St. Louis Rams, on condition of anonymity, admitted to concerns about the distraction and possible friction within the team that a reality show could create. He went on to say that he wasn’t even sure if his teammates were truly accepting of Michael Sam, or if they were just being politically correct. “From what I can tell so far, I think it’s a little bit of both, honestly,” the player said.

New questions were raised in the wake of Sam’s reality show announcement. After all, the NFL is very protective of its licenses. HBO has a deal in place for their “Hard Knocks” reality series, which follows a different team each year through its training camp. Meanwhile, Sam’s show is chronicling his journey through Rams’ training camp. On the surface, the concepts sound very similar.

HBO has full access to NFL facilities and logos for “Hard Knocks,” as it is a co-production with NFL Films. When asked if OWN had any agreements to film NFL grounds or logos, NFL spokesman Greg Aiello told TheWrap, “There is no such agreement with our office.”

It looks like the difference, as OWN sees it, is Michael Sam, himself. “The intention of this documentary has always been to follow Michael at the center of this historic moment in professional sports, and to shine a light on his courage and determination to make the St. Louis Rams’ roster,” OWN president Erik Logan told TheWrap. “There are no plans to shoot any practices or on-field activities at the Rams’ facility.”

OWN cameras were already rolling at Michael Sam’s house when he received the call that he’d been selected in the seventh round by the St. Louis Rams. His agent, Cameron Weiss, admitted on “NFL Live” that the Rams didn’t know about the planned documentary before they drafted Sam.

“We did our best to communicate to the league,” Weiss said on the show. “We did not know what team he was going to and when he was going to that team.” Once they found out it was St. Louis, they started communicating directly with that franchise.