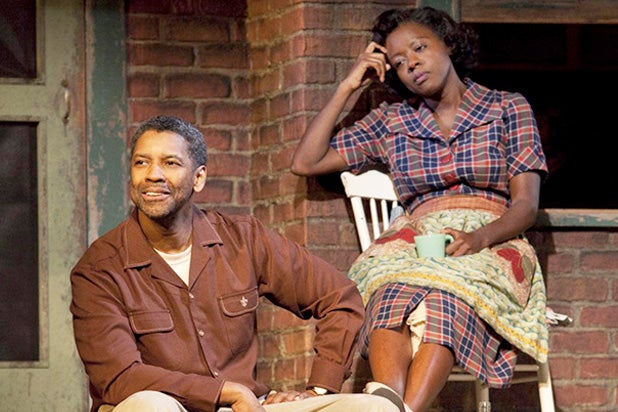 Denzel Washington and Viola Davis in the Broadway production of "Fences"

Viola Davis will campaign in the Best Supporting Actress category for her role in the Broadway adaptation “Fences,” which might make this year’s Best Actress race slightly less competitive.

Davis won the lead-actress Tony Award for her stage performance in the 2010 revival of the August Wilson play, although Mary Alice won in the featured-actress category when she played the role in the original 1987 production.

Even without Davis in the mix, though, Best Actress will still be one of the most brutally crowded races at this year’s Oscars.

Mind you, the fact that Davis will submit her “Fences” performance in the supporting category at the SAG Awards, which a rep for the Paramount film confirmed to TheWrap on Sunday, doesn’t mean that Oscar voters will accept her in that category.

While SAG and the Golden Globes allow contenders to submit in a specific category, the Oscar acting ballot specifically tells Actors Branch members to vote for performances in whichever category they think is appropriate, regardless of what ad campaigns may suggest.

One notable example of Academy voters rejecting a studio’s suggestion came in 2009, when the Weinstein Company pushed “The Reader” star Kate Winslet for Best Supporting Actress, not wanting to get in the way of her Best Actress campaign for “Revolutionary Road.” But Oscar voters ignored the latter movie and the studio’s “for your consideration” ads and nominated her as Best Actress for “The Reader.” (She won.)

Voters could do the same with Davis in “Fences.” Still, the Academy has tended to go along with studio suggestions in recent years — including last year, when Alicia Vikander won the Best Supporting Actress Oscar for a role in “The Danish Girl” that many people thought belonged in the Best Actress category.

However Oscar voters go, though, 2016 looks to be a rare year in which Best Actress is the more competitive of the two lead acting categories.

At this point, the frontrunners appear to be Stone, Portman and Bening, leaving little room for the rest of the contenders.

And that doesn’t even account for longshots like Kate Beckinsale in “Love & Friendship,” Emily Blunt in “The Girl on the Train,” Sally Field in “Hello, My Name Is Doris” and Rebecca Hall in “Christine.”

It’s understandable that Davis and her team could be attracted to the less competitive field of Best Supporting Actress, but that doesn’t mean the actresses she’s left behind will have things much easier without her.

NOTE: The original version of this story suggested that Annette Bening could possibly campaign in the supporting category for “20th Century Women.” According to a spokesperson for the film, she will campaign for Best Actress. The story was revised to reflect that.