Jin Ha, the star of the new Apple TV+ series “Pachinko,” has deleted and apologized for his old Tumblr account featuring candid photos of older Korean women taken without their consent, along with sexually suggestive captions he described as “inappropriate.”

Ha, who plays Solomon Baek on the new series, has deleted his Tumblr “Korean Flowers in Bloom” after readers resurfaced the decade-old account — and then issued an apology on his personal site.

“My ‘Korean Flowers in Bloom’ Tumblr account from 2011 should not have been made at all,” Ha wrote on his site. “It was a breach of privacy for the elder women featured, and many of my captions were inappropriate. I deeply regret my actions and apologize for them.” 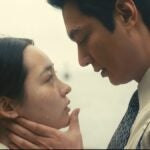 The apology statement goes on: “I sincerely apologize to the senior women I photographed. I apologize, as well, to the viewers whom I offended with this Tumblr account. My lack of judgment in 2011 has been pointed out by readers wiser than I have proved to be, and for that I am grateful.”

Ha said he requested Tumblr to delete his account immediately, and that he was wrong for taking those photos and posting them online 11 years ago.

Ha has also starred in “Devs” and the Chicago production of Lin-Manuel Miranda’s hit musical “Hamilton.”

Also Read:
How ‘Pachinko’ Producers Managed to Get an Asian-Led Series Made on the Scale of ‘The Crown’
x