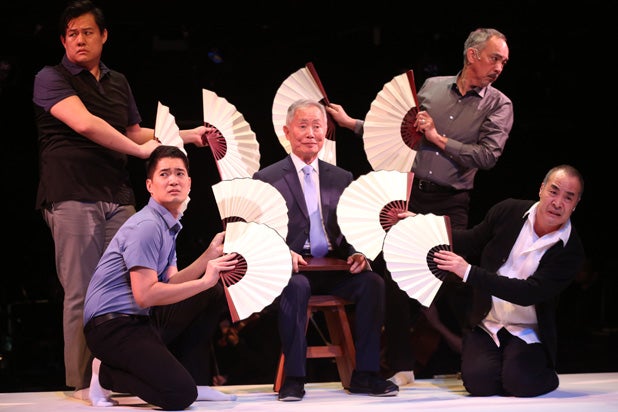 Franco Zeffirelli once remarked that directors rarely staged Mozart’s “Don Giovanni” effectively, because they either emphasized the comedy or the drama and rarely got the right balance. The same could be said of almost any musical written by Stephen Sondheim. Back in the 1970s, director Hal Prince almost always got it right, from “Company” to “Sweeney Todd.” Broadway theatergoers didn’t know how lucky we were. In hindsight, we do, thanks to John Doyle.

Doyle almost always gets it wrong, making Sondheim’s shows all about the angst. His most egregious failure was the 2006 Broadway revival of “Company,” which excised all the sex and fun of being a hot single man in Manhattan.

Doyle’s staging of Sondheim and John Weidman’s “Pacific Overtures,” which opened Thursday at Off Broadway’s Classic Stage Company, isn’t devoid of humor. He has made the inspired choice to cast Ann Harada in a number of roles, and the original “Avenue Q” cast member brings her inimitable wry panache to several scenes, often cross-dressing to wonderful effect.

There’s much gender bending in this “Overtures.” In the song “Welcome to Kanagawa,” Harada turns up as a very Bloody Mary madam, with her “girls” played by the male ensemble. They wear khaki trousers throughout the show, which gives the whole enterprise a very first-day-of-rehearsals look. Ann Would-Ward takes credit for these off-the-rack costumes. Jane Cox’s dramatic lighting, on the other hand, provides several stunning effects of water and endless sky.

And in addition to Harada, you will appreciate the traditional casting of Megan Masako Haley in the role of the samurai’s wife, Tamate. She unleashes one of the purist soprano voices to be heard outside an opera house. The male actors in this production, unfortunately, fail to make much of an impression, including George Takei in the walk-on role of the Reciter.

Prince’s lavish original staging in 1976 featured an all-male cast, and some complained at the time that it was merely Kabuki 101. For others, the effect dazzled in its bizarre amalgam of Asian theater traditions and Broadway pizzazz — just the right balance for one of Sondheim’s finest scores.

Today, some critics have accused such recent Broadway offerings as “War Paint” and “Groundhog Day” of being either “static” or replete with “unsympathetic characters.” Which is what many critics said of the original “Company,” “Follies,” and “Pacific Overtures.”

Weidman’s book about the Westernization of Japan, beginning in 1853, is certainly unique. He eschews the traditional concept of characters, likable or otherwise. And as for character development via song, there’s only Sondheim’s song “A Bowler Hat,” in which a samurai (Steven Eng) leaves behind his Japanese traditions and garb.

What Weidman provides instead is a vast panorama of a culture at a time of upheaval. Back in 1976, Broadway audiences didn’t know what to make of it. All they cared about was the recently opened “A Chorus Line.” And Clive Barnes in the New York Times said the music sounded like Madama Butterfly wrestling in the pit with Leonard Bernstein.

Melodies that weren’t obvious upon a first hearing are now much clearer in “Pacific Overtures,” not that there’s an abundance of them. Sondheim is more interested in the Monet effect: repeating a subject, or melody, but always changing the color.

The mystery of this “Pacific Overtures” is why Doyle cuts two songs. The show is hardly a Broadway “Parsifal.” Gone is “Chrysanthemum Tea,” arguably the song most critical of the Japanese mindset. Gone, too, is “Lion Dance.” Doyle has never cared for dance; he unwisely cut “Tick Tock” from “Company.” Losing the “Lion Dance” makes “Pacific Overtures” a more seamless show, if your idea of seamless is not having an intermission. But two-plus hours with an intermission often feels shorter than 90 minutes with no break.

In addition to Harada and Haley, the other bright spot of this “Pacific Overtures” is the orchestra, if nine players can be called an orchestra. Jonathan Tunick’s orchestrations have rarely sounded so lush.