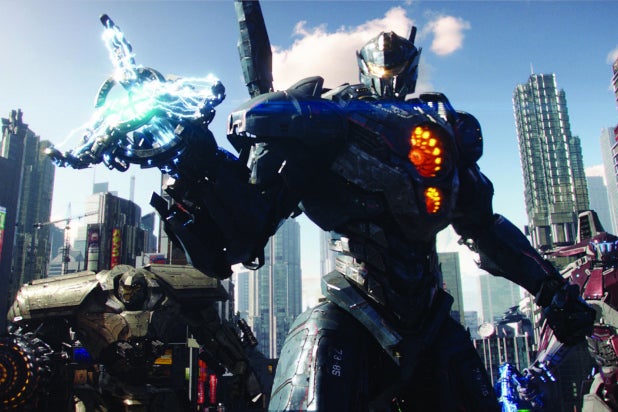 The title “Pacific Rim Uprising” sounds like the punch line to a dirty joke, but there’s no sex and no fun in this formulaic, cynical sequel to Guillermo del Toro’s 2013 film “Pacific Rim,” which was set in a future where human beings are fighting creatures called Kaiju, sea monsters that can resemble dinosaurs or robots who come out of the Pacific Ocean to lay waste to the earth.

One of those human beings fighting the sea monsters was Idris Elba’s Stacker Pentecost. John Boyega has been cast as Pentecost’s son, Jake, in this second film, and he has to carry the whole movie. “My generation, we were born into war,” says Boyega on the soundtrack in the first hectic scenes, which seek to establish him as a mercenary. “I am not my father,” says Jake, just so we don’t miss the point.

But his half-assed rebellion is barely sketched in before his daddy issues are making him join up to fight the Kaiju. Jake meets a young girl named Amara (Cailee Spaeny), who has created her own Jaeger, a large humanoid mecha that is built to fight the monsters. Though Spaeny is 19 years old, she comes off a lot younger than that, and so she is not called upon to function as a love interest for Jake.

Jake doesn’t get any love interest at all in “Pacific Rim Uprising,” but he keeps making deadpan comic references to his own good looks. “I’m sexy,” he tells colleague Nate (Scott Eastwood), matter-of-factly, as he fixes himself a large bowl of ice cream with lots of toppings. Several scenes later, Jake does a very accurate impersonation of Eastwood’s low speaking voice, and then talks about how sexy Nate is.

Referring yet again to his looks later on in the film, Jake says, “This face is set up well…beauty is a burden!” Boyega is definitely a good-looking guy. The camera likes him, and he has a commanding vocal presence when he issues orders late in the film. So it’s worth asking why his character is always talking about his own good looks and joshing with Eastwood’s character and almost totally uninterested in the women in the cast.

Since Boyega is a producer on “Pacific Rim Uprising,” he had input into how he wanted to come across on screen, and surely he didn’t want to come across as fixated on himself and on Eastwood. These fixations are supposed to be funny, but they play strangely because director Steven S. DeKnight and a quartet of screenwriters have provided so little material here with other characters to support these heroes or to set them off. Why not give Boyega a girlfriend in this movie, or another family member to care about? (Jake has an adopted sister, but she is barely in the film.)

“Pacific Rim Uprising” has zero emotional pull. The musical score by Lorne Balfe (“The Hurricane Heist”) keeps telling us that something exciting is happening when the images beg otherwise. There are no stakes here, just lots of robots and then dinosaurs who rise up out of the sea and place their large feet down onto pavement that rises up as random people run away and try to escape. The main imagery in this movie is of large office buildings falling down neatly or getting clawed or scooped from the middle by these ugly and uninteresting monsters. If that’s your thing, step right up.

Also Read: Scott Eastwood Calls Out Australian Tabloids for Making Him 'Look Like a Total Creep'

As in the old science-fiction movies of the 1950s, there is a human villain here named Dr. Newton Geiszler (Charlie Day). Day seems to have patterned his performance on the 1980s-era Christian Slater, and his character even listens to the ’80s song “I Want To Know What Love Is” to show just how cheesy he is. At one point toward the end of the film, Geiszler says, “We’re going with giant robots again…real original, guys…I am not impressed!” But it doesn’t take a lame villain not to be impressed by this.

As the new Jaegers are prepared to fight the new Kaiju, Boyega cries to the young warriors, “Now let’s mount up, and get it done!” as Eastwood’s Nate stands by him silently and approvingly. This is maybe the only moment in the wholly disposable “Pacific Rim Uprising” that might get a laugh, and unfortunately it is not an intentional one.