“Taste the Nation” and “Top Chef” host Padma Lakshmi spoke at TheWrap’s 2021 BE mentorship conference on Thursday about the importance of taking time for “silence and stillness.”

“It was hard being under lockdown,” Lakshmi said. “And managing my daughter’s hybrid- or home-schooling, it was hard to even get a workout in and still feel human. But somehow I tried to at least take half an hour even if I just laid in bed in the dark for myself.”

Describing it as an exercise in “silence and stillness,” Lakshmi said the practice was an important act of self-care during the pandemic. “It wasn’t any big meditation. It wasn’t chanting, wasn’t anything, you know, difficult,” she said. “It was just literally having half an hour where I don’t move or talk or listen to anybody else.” 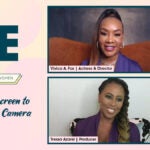 Also Read:
Vivica A Fox Calls Directing ‘Next Chapter for My Career’ (Video)

“When I was younger, I used to think that being successful meant being busy,” she explained. “And so I tried to be as busy as I could, because I was raised to find virtue in that right to work hard to do everything you can to get to where you want in life and in your career.”

But busyness does not equate to success, Lakshmi said. “Being busy doesn’t mean you’re successful. Being productive and effective means you’re successful. And sometimes what that means is to take a break, and to give your body and your mind rest, and give your soul and your psyche a little bit of downtime.”

Lakshmi suggested that having even a short break from the constant hustle of daily life can help.

“Your soul doesn’t take a beating, your spirit has a chance to soothe itself,” she said. “And then you come back to whatever you’re doing so passionately with a vigor and a clear headedness that you didn’t have before.”