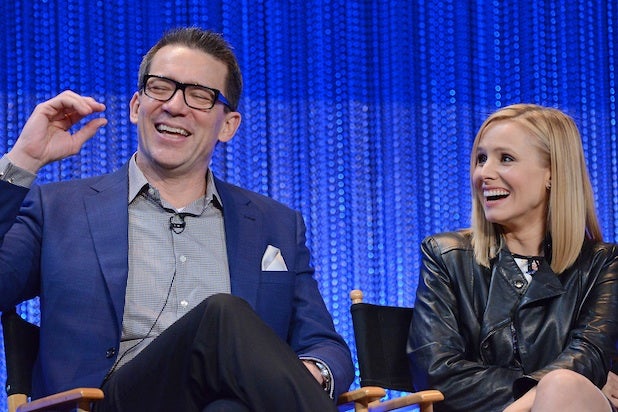 “Veronica Mars” creator Rob Thomas, star Kristen Bell and fellow castmembers kicked off the 2014 PaleyFest on Thursday at Hollywood’s Dolby Theater to discuss the hard-earned movie based on the canceled series, which hits theaters on Friday.

The panel naturally opened with the record-breaking Kickstarter campaign that made the movie possible.

“We did both things that we needed to do simultaneously,” Bell said of the campaign. “We needed to prove that there was an audience, because it was a bit unbelievable that there was a rabid fan base for a show that had been on the air seven years ago. And we needed someone to finance the film. So, I thought [Thomas] was as brilliant as ever.”

She would later say of the Kickstarter backers, “We’re all clear as to how and why this film got made: Fans forked over money. We’re not flippant about that. It’s f–kin’ radical!”

Thomas did reveal that the video that kicked off the Kickstarter campaign back in March of last year was actually made in Spring 2012.

“We were ready to go,” Thomas said. “We had been talking to Warner Bros. for some time and then it went away all of a sudden. They had second thoughts at the studio and so we had to sit on it for a long time.”

Thomas even thought about releasing the video online so it would go viral and force the studio’s hand. “I’m glad I didn’t do that,” he said.

So, what changed six months later? In that time, the video went viral within Warner Bros. and executives began to get behind the idea of the movie.

“Six months of me sort of wallowing in my depression ended when I got a call from my agent saying, ‘You’re not going to believe this, but Warner Bros. is backing this idea. You’re back on the right track.’ And then we had a shot again,” Thomas recalled.

As for the chances of a sequel, Thomas is open to all possibilities that include a TV reboot of the series canceled in 2007 and a continuing film franchise.

“The idea of a Netflix or Amazon order excites me to no end,” Thomas said. “I would love it. I would love to be able to do the R-rated version of ‘Veronica Mars.’ I would love to tell some darker stories. It’s a noir show, Veronica’s an adult now. I would certainly listen to that. Hopefully, people would line up for that as well.”

He continued, “I’ve said many times. We also think we could be a very successful low-budget Bond franchise, do one of these [movies] every two or three years.”

When asked whether the studio had given him an idea of how well this first film has to do in order to make another one, Thomas gave a very curt and simple “Yes.”