Most moviegoers will know French artist JR from his stirring collaboration with Agnès Varda, “Faces Places,” the Oscar-nominated 2017 documentary that revealed a friendship steeped in artistic fellowship about the hidden majesty in people whose lives often go unnoticed. Varda’s recognizable haircut and compact size and JR’s spry hat-and-sunglasses anonymity made for a charmingly odd pairing as they bantered and interviewed various laborers across France whose faces became breathtaking murals.

The technique they used is JR’s bread and butter — photographs blown to building-sized proportions, then pasted in public — but “Faces” very much felt led by Varda, with her thirty-something companion as an energetic sidekick. JR has had a long history of recording what he’s up to, whether as an archive or to coincide with his exhibitions.

He’s now directed his own feature documentary, “Paper & Glue,” and it’s only fitting that even in the role of self-biographer, he’d still rather share the frame with the people he meets, collaborates with and celebrates on a gargantuan, impossible-to-ignore scale. He even opens the movie with a quote of Varda’s: “If we opened people up, we’d find landscapes.” 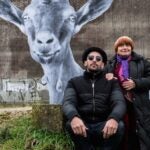 Both a narrated retrospective and window into his process, the fast-paced, buoyant “Paper & Glue” is JR taking us along as he initiates a project or tells the story about other works, which is where we realize that talking is one of his key tools. A spirited, ever-curious man with a friendly vibe, he’s still got to sell a desired subject on being rendered three stories tall and available for anyone to see. But it’s the act of seeing that is his theme. What his ambitious, often fly-posted installations in improbable locations offer are a consideration and perspective that can make the world’s invisible people suddenly, grandly visible.

We sense each art piece allows for the next, and the movie’s structure is of stories within stories. Explaining himself to hardened inmates at a maximum-security prison in Tehachapi, California, for a possible installation, JR exuberantly talks of (and for us, shows through footage) his 2017 U.S.-Mexico border project in which a huge, scaffolding-held image of a Tecate toddler — whose family lives feet from the line — appears to be playfully peering over into the U.S. We see JR also arrange a makeshift table to “cross” through the fence, which allowed gatherers on either side to share food and drink, undisturbed by a U.S. border patrol who clearly saw no threat.

That the kid’s face rested cheerfully “above” the fence was one kind of statement. But was this also the power of art to dissolve boundaries? Or just the spell of a convincing artist? Given the fact that, after the border installation story, the prison project enthusiastically gets going — rival gangs and guards coming together to paste pieces of their photographed images onto the prison yard with glue and brooms — maybe it’s a little bit of both. JR is also effective at demystifying art while also communicating all it can be, too. As one enlightened prisoner says afterward, “The process is what mattered.” To which JR replies good humoredly, “It took me years to realize that.” 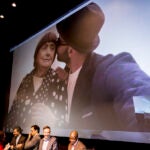 The middle section is a spirited recounting of his origins as a child of Arab descent in Paris’s immigrant-filled banlieues who thrilled to graffiti art. A fortuitous friendship with a fellow ghetto-raised artist named Ladj sparked a collaboration to raise France’s consciousness about who lives in housing projects. This is when JR recognized the power of photographed faces turned into guerrilla-style street exhibits of beauty and empathy, but the art still had to deal with fallout from civic tensions stemming from the Paris riots of 2005. From that point, JR’s focus turned to engaging with marginalized people everywhere and finding spaces big enough for their eyes, faces, bodies to draw our attention.

In its swirl of ingenuity, purity, and achievement, “Paper & Glue” can’t help but feel self-serving for its traveling, ever-creative dynamo, even when the tale JR has to tell is unquestionably riveting and inspiring. His mission to a Rio favela, for instance, and how his patient, risky finessing of a hard-bitten community led to a stunning celebration of its women that gave the impression they were looking out at the world from the distinctive hills.

That JR also started a school in that same favela to inspire young artists also speaks to how much he’d like to leave a trail of passion behind: for art, community, speaking up, being noticed. The work may disappear — the documentary ends with one such intentionally short-lived exhibition tied to an abandoned banlieue high-rise set for demolition — but the people, JR wants us to know, will always be there.