In any series involving time travel, it often becomes a herculean task to actually explain the rules of time travel in that universe. In “Paper Girls,” that responsibility falls to Jason Mantzoukas, as The Grandfather — but he absolutely relished the duty.

In reality, Amazon Prime’s “Paper Girls” actually has a pretty clean way of explaining time travel, compared to other series. To explain it, the Grandfather uses a mixtape that Mac listens to on repeat. The normal timeline, that’s the original recording. But as the timeline gets written over with new “songs” — in this series, by the STF — the “audio” that is recorded over gets fuzzy. Eventually, enough re-recording leads to complete disintegration of the tape (“the tape” being reality in this case).

The Grandfather merely explains the actual mechanics of it, rather than the “rules” time travelers must abide by. And where that task can be daunting for some actors, Mantzoukas wasn’t worried. It helped that he’d read the comic the series is based on.

“You know, I understood it pretty much. I understood it in the context of the story we’re telling,” he explained to TheWrap. “Because I’d read the comics a bunch of times. Like, I’ve been a ‘Paper Girls’ fan since since Brian and Cliff started putting the book out. I bought issue one in Secret Headquarters in Los Angeles, my favorite comic book store, and had been reading it ever since. And so I knew their version of a time travel story. And so I pretty much understood it, and I didn’t kind of poke at it too much to be like, ‘Well, what about this? What about that?’ Because, for me, it lines up with the story we’re telling. And so, it was great.” 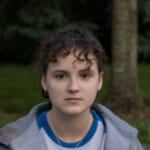 The Grandfather’s explanation is almost enough to convince the girls that time travel is, in fact, bad and that the time war is warranted. Almost. But they know he’s not to be trusted, no matter how nice he seems (he is a Mantzoukas character after all — he’s got some charm to him). And that dichotomy was another piece of the character Mantzoukas ate up.

“I love that I get to have both kind of antagonist, villain kind of vibes, but then also explain or exposition. You know, like I’m the — my character’s name is Grandfather but the story is a coming of age story for young girls. And now you’ve got an elder kind of explaining the rules, you know, the rules that they’re going to just break over and over and over again, which is really compelling. So I love that I got to have that kind of — and I thought the mixtape was a great way to illustrate it, you know?”

Of course, beyond the mixtape metaphor being a creative one, Mantzoukas and his on-screen lieutenant Adina Porter, who plays Prioress, also just appreciated that the metaphor put a little respect on the general concept of a mixtape.

“I love the fact that the mixtape is getting the respect that is due,” Porter said, to a hard agreement by Mantzoukas. “All of us of a certain age have been given a mixtape. The time it takes to create a mixtape! And I’m glad, I’m glad that it’s being respected the way it ought to be.”

You can watch TheWrap’s full conversation with Mantzoukas and Porter in the video above. 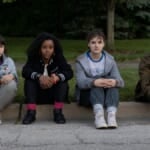 Also Read:
‘Paper Girls’ Cast Breaks Down What Comes Next After That Finale Cliffhanger (Video)