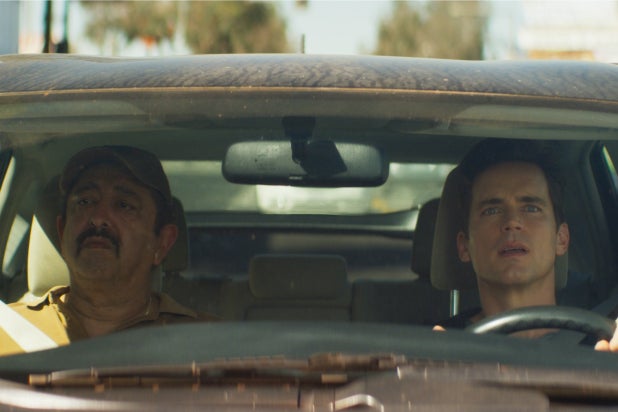 Well-intentioned but at times insensitive, “Papi Chulo” is a complicated movie. It wants so badly to do the right thing when the situation is all wrong.

Written and directed by John Butler (“Handsome Devil”), “Papi Chulo” follows Sean (Matt Bomer), a popular Los Angeles weatherman, on the heels of an on-air mental breakdown. Forced to take time off from work, he struggles to cope with his loneliness after the loss of his relationship some months before. Looking to do something with the free time on his hands, he enlists the help of a day laborer, Ernesto (Alejandro Patiño, “The Bridge”), to help repaint the deck outside his home. Instead, Sean ends up more or less hiring Ernesto to be his friend.

Many of the jokes in “Papi Chulo” are rooted in this unequal-buddy comedy routine. Sean feels entitled to this friendship with a stranger he barely knows. His behavior comes across as inappropriate even before adding on any sort of social, racial or income inequalities between the characters. But the film never examines that, at least not beyond noting that Ernesto has a nightmarishly long commute to one of the neighboring Latino-heavy cities outside Los Angeles.

Also Read: 'The Sinner' Gets a Season 3 - and Matt Bomer - From USA

It doesn’t explore deeply enough why Sean only latched on to his former partner’s Latinidad in a sort of fetishistic way. Instead, it’s supposed to be funny that a white man is trying to teach a brown man who can barely speak English how to drink a shot of wheatgrass and to feel comfortable around gay men. But to whom is this supposed to be funny?

There’s no escaping the silence of Ernesto’s language barrier. He has little say in how Sean treats him because he needs the money that comes with tolerating Sean’s requests to go hiking or to take a boat out in Echo Park. Ernesto is the token non-white character meant to help Sean’s character grow and learn from his mistakes, a riff on the “magical negro” trope.

Also Read: Ryan Murphy to Produce 'The Boys in the Band' Play as Netflix Film

If viewers were upset by Cleo’s lack of dialogue in “Roma,” they might likely leave “Papi Chulo” furious. There’s almost no attempt to see the events from his side of the story. His role in the film is to look sad and silent and to endure whatever his white employer throws his way for $20 an hour.

The memory of “Green Book” is too fresh to wholly set aside, and there’s a similar way in which the movie tries to reach a kind of racial reconciliation through an unlikely friendship. Thankfully, Sean is not as insufferable as Tony Lip, but he’s the well-meaning progressive variation of a character who doesn’t examine his own biases. In Sean’s case, he cannot see Ernesto as another person with an existence outside his employer’s need for companionship. It’s a passive, liberal shade of racism that expects to be rewarded for pointing out the wrong ways in which Ernesto is viewed by Sean’s privileged friends and/or assumed to be “the help” by other white people.

Despite the script’s uneasy undertones, Bomer and Patiño give rather decent performances. Patiño plays his part with a Keaton-esque stone face, taking in the chaos around him with a supernatural calm. For all of his character’s misbehavior, Bomer really seems like he’s trying to empathize with the weatherman’s mental-health crisis. His acting out and desperate bids for intimacy come from pain. I wish the movie would have given Patiño an equal character arc and screentime to his co-star. Instead, he’s the silent straight man for Bomer’s charismatic performance to bounce off of.

Tying the movie to its central character’s career, weather plays a not insignificant part in the soundtrack (with songs like “It Never Rains in Southern California”) and in the cinematography by Cathal Watters (“Viva”). Most of the movie looks like a sun-dappled postcard of Los Angeles, the warm undertones bouncing off every reflective surface like heat. Occasionally, there are overexposed shots that make it feel as if perhaps there’s too much light in this part of the world. Appropriately, when it finally does rain — a heavy-handed cleansing metaphor — the screen dims under the dark grey skies.

At least “Papi Chulo” gives Ernesto a family life, a wife who calls him because she’s worried about his safety, and friends who tease him because of his new boss’ eccentric requests. But there are a few head-scratching moments where reductive stereotypes overpower the movie’s message of friendship. I’m not sure that even with the divine amount of patience in this character that he would have tolerated Sean crashing his daughter’s once-in-a-lifetime quinceañera party. It couldn’t have been a regular party, but the quinces addition feels added to make the event appear more Mexican, more supposedly authentic and different than what Sean has experienced before.

All seems forgiven pretty easily, just like the rest of Sean’s erratic behavior. Since this is another story of a white man whose life is improved by gaining a non-white friend, what does Ernesto get in return? The filmmakers aren’t so interested in that part of the story. It’s more important that the ham-fisted jokes lead the characters to a heartwarming conclusion about a one-sided friendship that speaks to one segment of an audience but not likely to others.