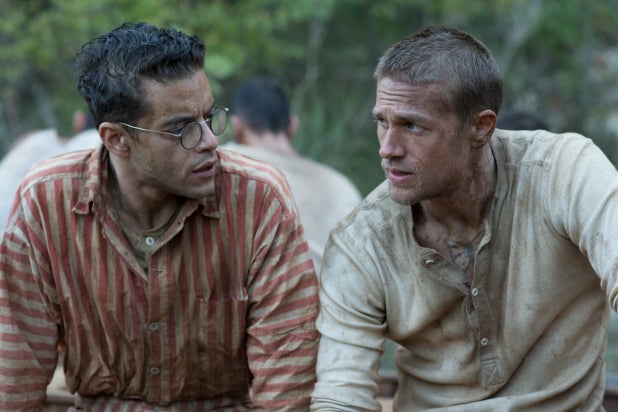 As endurance tales go, Frenchman Henri Charrière’s is one of the most intense, a case of wrongful imprisonment that moves from the degradation of a notorious penal colony to the isolated awfulness of Devil’s Island. Charrière’s 1969 book “Papillon,” named for his moniker (derived from a butterfly tattoo) and an autobiographical dramatization of his experiences, became a popular, controversial memoir in France. So why has it inspired not just one but two so-so prison escape films?

Franklin J. Schaffner’s 1973 epic of grime and sweat “Papillon” was made from a screenplay co-written by Dalton Trumbo. It boasted megastar Steve McQueen in you-can’t-break-me mode ten years after “The Great Escape,” but to lesser effect, and Dustin Hoffman — as Papillon’s pal Louis Dega — once more flexing his peculiar gift for disappearing into a role and chewing scenery simultaneously. At two and a half hours, it barely justified its running time, and only sporadically earned traction from the enriching bond of male-male affection and its exotic sweep. Mostly, you saw a lot of abased people in desperate straits, and received little reason to care.

But now we have a new version, directed by Michael Noer and starring Charlie Hunnam as Papilllon and Rami Malek as Dega, and though it’s a quarter of an hour shorter, it also struggles either to warrant its existence or to whip up fascination, because it’s still a run-of-the-mill tapestry of dirt, confinement and brutality above all else. One would think in a world in which mass incarceration and prison reform are hot-button issues, revisiting Charrière’s tireless effort against a sadistic system to be a free man might have some resonance. But this “Papillon” just lopes from place to place, and indignity to indignity, without any special style or verve.

You can sense it in the lackluster opening scenes, set in a disreputable 1931 Paris you’d only know was colorful from cinematographer Hagen Bogdanski’s hues. Hunnam’s tough, tattooed safecracker maneuvers the underworld with his girlfriend (Eve Hewson, “The Knick”), but runs afoul of a crime boss and gets framed for a thug’s killing. Shipped off to the penal colony of French Guiana in South America, Papillon’s survival instincts tell him to latch on to convicted forger Dega (Malek), a meek figure but one with a cavity-stashed wad that makes him an immediate target. That is, if biting bats, tropical illness, punishing labor and regular beatings don’t do the job first.

Papillon makes a deal with Dega to protect him from the other inmates in exchange for money to secure a boat for an escape, but only for Papillon. But under white-linen-clad Warden Barrot (Yorick van Wageningen, “The Girl with the Dragon Tattoo”), escape attempts lead to solitary confinement, and murder incurs the guillotine. As Papillon and Dega allow their strict arrangement to morph into a cautious friendship, and eventually an elaborate breakout scheme for both that corrals two more convicts (Roland Moller’s bruiser Celier and a helpless lad played by Joel Basman), the movie finds glimmers of genuine entertainment in the unguarded closeness a couple of lifers can create for themselves in the harshest of conditions.

Watch Video: 'Bohemian Rhapsody': Rami Malek Is the Champion of the World in Trailer for Freddie Mercury Biopic

That’s in spite of the fact that Hunnam is still trying to find himself as a movie star, and Malek is still testing the boundaries of star-powered eccentricity. There’s still too much Jax — Hunnam’s tough-tender biker from television’s “Sons of Anarchy” — in his gruff hero roles, which strangely enough makes one appreciate all the more McQueen’s ability to make his interchangeable demeanor from film to film into a magnetic action-career throughline.

Hunnam is better later as one half of a team, when you can enjoy his thawed warmth toward Malek’s Dega. His co-star is more watchable throughout, however, the cautiously scratchy delivery and birdlike wariness that’s made him an off-kilter darling at least befitting so extreme a setting. When the action shifts to Devil’s Island at the end, Malek actually nails something uncharacteristically peaceful about Dega’s uniquely accommodated solitude.

But as for all the elements one craves from a prison escape movie — dangerous fights, tension-filled gambits, and the thrill of a chase in a hazardous environment — they’re unremarkably delivered under Noer’s pedestrian visual style and rhythms. It’s as if, once production design, costumes and makeup did their job recreating a nightmarish place, all he had to do was turn on a camera in the general direction of whomever was speaking. Solitary confinement without any respite is undoubtedly a special hell, but Noer can’t make Charrière’s years there into a particularly memorable sequence about exceptional fortitude.

In the end, this “Papillon” isn’t exactly a sentence, but we should just make it clear right now that any further attempts to retell this story should be worth a stint in movie jail.