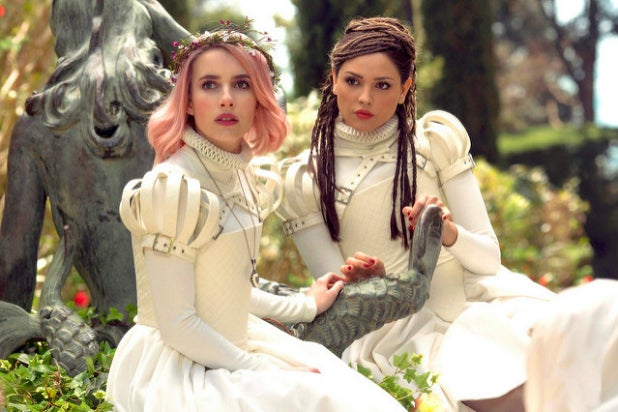 Announcing herself as an ingenious genre-defying filmmaker, Alice Waddington has crossed from the land of festival-acclaimed shorts to building a colorful extravaganza for her feature debut “Paradise Hills,” a Spanish-American coproduction backed by both a legion of actresses on the rise and sumptuous production design.

An opulent ballroom worthy of a fairytale (in line with Disney’s live-action “Cinderella”) hosts a wedding for upper-class royalty Uma (Emma Roberts) and Son (Arnaud Valois, “B.P.M.”) in an alternative reality that exists somewhere between near-future and palatial past. But just as we are about to learn whether or not the union is one of mutual love, we cut to a few months prior in an exuberant island covered in rose gardens and housing a “recovery” facility (somewhere between boarding school and mental hospital) for young women who don’t fit in.

Candy-hued spaces, white fashion-forward uniforms; and a cordial headmistress known as The Duchess (a surprisingly subdued Milla Jovovich), welcome patients into this artificial kingdom. Understandingly, Uma is suspicious of the relocation, a move by her parents with the intent of convincing her to marry Son.

The world-building, courtesy of Waddington and co-writers Nacho Vigalondo (the mind behind the splendid “Colossal”) and Brian DeLeeuw, overflows with concepts and intricate attributes, which range in levels of efficacy but are always tantalizing to the eye: a memory locket with a hologram of a cherished moment, exposure to persuasive videos while riding a carousel horse, and “mirror therapy” to compel introspection.

Sharing in Uma’s unwanted rehabilitation to adhere to the status quo are Yu (Awkwafina, also seen this year at Sundance in “The Farewell”), who wears studded headphones as contemporary crown, and Chloe (Danielle Macdonald, “Dumplin'”), a plus-size Southern belle whose family is judgmental of her body.

Following recent, high profile stints with Edgar Wright, Robert Zemeckis, and Robert Rodriguez, Mexican star Eiza González is granted a more significant amount of screen time here. Her musical aptitude is capitalized on as she plays pop queen Amarna, Uma’s closest ally, who pulls back the curtain showing her the darker face of the shinny ordeal. González’s portrayal rings magnetic — even if not out of character for her — so much that it occasionally makes one wish it were her story we were witnessing.

Secrets lurk behind glossy accommodations and polite staff, until the heroines become aware that the objective is not merely to change their psyches, but something far more drastic. Near its contrived conclusion, “Paradise Hills” strives to allude to class issues via an allegory that implies upward mobility can only attained by compromising one’s own identity. The self-explanatory terms “lowers” and “uppers” are used to discuss the abysmal divide. It’s a well-intentioned effort to imbue the fanciful tale with more socio-politically relevant drama, but it lacks impact because it must compete with a multitude of more concrete musings.

What sticks out is Spanish DP Josu Inchaustegui’s arresting use of light to enhance and to play off of the vibrant palette in set decorations and costumes. Blending dreamlike locations found in the real world with a dollop of visual effects, Waddington reaches the desired effect of a universe where technology and fantasy interact. Her cocktail of ideas yields a magical sci-fi thriller with an empowering edge, which, though imperfect due to its ambitions, puts women in charge of their own destinies.

Challenging the narrative frameworks, the film turns obsolete archetypes into individuals with agency. Princesses don’t need a knight to escape their prisons; they can blow them up themselves.