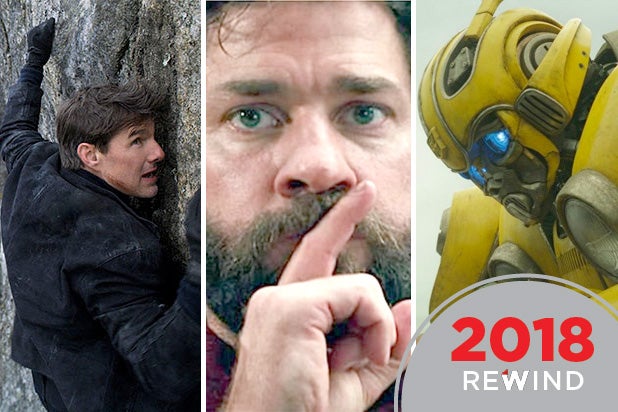 Even with the massive success of John Krasinski’s “A Quiet Place” and the latest installment of Tom Cruise’s “Mission Impossible” series, Paramount had a mostly flat 2018 at the box office.

Though it crawled up a spot from 2017 to take sixth place in market share, pulling in just over $700 million in domestic box office to date, the Viacom-owned studio still lagged well ahead the five other majors and showed little sign it would reclaim the No. 1 spot it held as recently as 2011.

“It’s a year where they have to take stock and look forward to creating more franchises like ‘Mission: Impossible’ as well as working with filmmakers like John Krasinksi to come up with unexpected hits like ‘A Quiet Place’ that could be hugely profitable for the studio,” comScore senior media analyst Paul Dergarabedian said.

The studio also scored a second-quarter sleeper hit with actor-director John Krasinksi’s horror drama “A Quiet Place.” Made on a production budget of $17 million, the film earned $340 million worldwide and earned nearly unanimous praise from critics — with a sequel already slated for 2020.

“Book Club,” which stars Diane Keaton, Jane Fonda, Candice Bergen, and Mary Steenburgen as a group of lifelong friends who decide to jumpstart their sluggish love lives after reading “Fifty Shades of Grey” was also another summer hit for the studio. The film was acquired at AFM for $10 million and it has earned $68 million worldwide.

And Travis Knight’s “Bumblebee,” a post-Michael Bay installment in the “Transformers” franchise budgeted at a more modest $135 million, looks to be doing solid business over the end-of-year holiday corridor on the strength of the series’ strongest critical reviews. It too will need a boost from foreign ticket sales to transform into profitability.

But then there were the studio’s many box office misses. The $59 million animated film “Sherlock Gnomes” grossed only $90 million worldwide; Mark Walhberg’s $48 million family comedy “Instant Family” sits at $71 million worldwide with 80% of the international territories still to release; and the JJ Abrams-produced horror film “Overlord” made just $41 million worldwide on a reported $38 million budget.

The studio’s biggest misfire may have been the Johnny Knoxville-led “Action Point,” which earned just for $5 million on a budget of $19 million.

While other major studios like Disney regard Netflix as a threat, Paramount has forged a cozy relationship with the streaming giant to offload projects — or portions of projects — that it no longer sees as viable to market to theatergoers. After reports of poor test-screening results for the $40 million sci-fi movie “Annihilation,” the studio sold international distribution rights to Netflix — a deal that mitigated a domestic box office gross of just $32 million.

Paramount also sold Netflix all of the Abrams-produced “The Cloverfield Paradox” for a reported $40 – $50 million, recouping much of the reported $45 million budget without having to shell out a cent for marketing. And this month the studio unloaded the horror film “Eli,” the only one of the three that wasn’t a holdover from the studio’s previous regime.

Clearly it was another rebuilding for year for Jim Gianopulos, who took over the studio reins in April 2017 after the departure of longtime Paramount chief Brad Grey. He brought in Disney Animation Studios and Pixar marketing exec David Sameth as president of worldwide marketing, with Liz West and Rachel Cadden promoted to EVPs.

And after a long and fallow period without new productions, the studio has kicked back into gear. Some high-profile 2019 films include a remake of Stephen King’s “Pet Cemetery,” the Elton John biopic “Rocketman,” the Will Smith sci-fi actioner “Gemini Man” and a live-action version of a beloved cartoon from Viacom-owned Nickelodeon, “Dora the Explorer.”

The studio is also aiming to reboot dormant franchises. “Deadpool” director Tim Miller has been tapped for another reboot of “Terminator,” and Tom Cruise is rebooting the 1986 fighter pilot hit “Top Gun” — though the studio pushed the release of “Maverick” from July 2019 to June 2020. Even so, with higher profile projects on its slate again, Paramount may once again be riding the highway to the danger zone.

Every 'Mission: Impossible' Movie Ranked, From 'Choose to Accept It' to Impossibly Good (Photos)

Where does “Fallout” rank?