It’s been a brutal few years for Paramount and its chairman Brad Grey.

Buffeted by a tortured relationship with an unwilling dance partner in DreamWorks, fighting a hostile industry rumor mill and shadowed by an endless court case with disgraced Hollywood detective Anthony Pellicano, the studio finally faces the summer of 2009 on calmer, and more stable ground.

“Star Trek,” the first of two summer tentpoles rolling out on Friday, gives Paramount the chance to relaunch a classic franchise that could produce steady blockbuster spinoffs for years to come.

The early signs are that J.J. Abrams has come up with a big-budget winner, successfully preserving enough to satisfy old-school Trekkies, while investing the story with enough depth of emotion to engage new viewers. Reviews called the film “cool” (Newsweek) and “exhilarating” (Rolling Stone), and tracking on the film is strong.

That will be followed in late June by “Transformers: Revenge of the Fallen,” a sequel to the blockbuster made in  collaboration with DreamWorks, with director Michael Bay and star Shia LaBeouf back in action.

“We’re going to have the best year in our history,” crowed Viacom chief Sumner Redstone at a conference last week. “Paramount will take more market share.” (For the rest of Paramount’s 2009 summer slate, see accompanying story.) 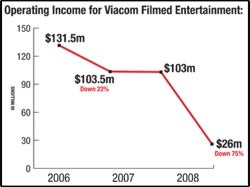 But that would be a notable feat, since the studio will be releasing fewer movies than last year’s 14, when it came in second among the majors, with 16.4 percent market share. (The studio also releases DreamWorks Animation and Marvel movies.)

Viacom’s earnings (NYSE: VIA-B) fell 34 percent in the 2009’s first quarter, with a loss of $123 million in the film division. And just as disturbing, operating income for Viacom’s filmed entertainment division has been in decline for two years running, with a shocking 75 percent drop in 2008, and dropping 22 percent in 2007. (See charts.)

The earnings loss came mainly because of slower international film sales, which are hampered (ironically) by a strong dollar, and because of marketing costs for DreamWorks Animation’s “Monsters vs. Aliens.” 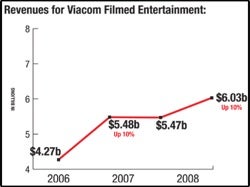 (Other studios are suffering too; Disney announced a 46% drop in profits.)

All that has been enough to spark a brutally worded "sell" recommendation from one stock analyst, Rich Greenfield at Pali Research.

“While we continue to believe Viacom’s assets are undervalued,” he wrote in an April 20 report, “we simply do not believe its management team is capable of closing the valuation gap, particularly given a pattern of poor decision-making, the lack of respect (Viacom President and CEO Philippe) Dauman has from his employees, peer media company managements and investors, as well as a board of directors that continues to excessively reward underperforming management.”

Greenfield also noted declining ratings and a 20 percent drop in revenues at MTV.

Viacom executives complained that Greenfield had made his criticisms personal in a fit of pique over not being invited to Paramount screenings.

But in an April 30 call with analysts, Dauman recognized that Paramount needed to improve the company’s bottom line performance.

“Cost containment remains a key focus for us and we are on target to achieve the $200 million in savings we originally projected in connection with the cost-savings initiatives we announced last December,” he said. “And we will achieve additional efficiencies in the ordinary course.”

Inside Hollywood, critics of the studio note that Paramount has yet to create a distinctive corporate culture that defines the film company ever since the departure of Sherry Lansing. And some executives say that the ballooning overhead costs suggest an infatuation with box-office returns rather than profit margins.

“They seem to be more in the box-office announcement business than the making-money business,” said one executive. “They talk a lot about revenue, but the translation into dollars is difficult.”

Paramount chairman Grey declined a request for an interview, and a studio spokesman declined to respond.

In particular, the expansion at Paramount Vantage — which made prestigious money-losers including "The Kite Runner" and “There Will Be Blood” — lost the studio an estimated $100 million, according to current and former Paramount executives. The head of Vantage, John Lesher, was then promoted to film group chief at Paramount; Grey is said to value Lesher for his taste in film.

Executives at Paramount call the criticism unfair, and say they’ve been in “reboot” mode since 2006. To be sure, Grey took over the studio with very few projects in development, and has needed to spend capital to get the studio’s creative juices flowing.

Clearly that was the idea behind the 2005 DreamWorks acquisition, which turned into an endless battle over ego and control with David Geffen, Steven Spielberg and company.

But that battle is now behind the studio.

Paramount is demonstrably in a stronger position than when Lansing continually green-lighted forgettable thrillers with mid-level budgets, rather than tentpoles, in the years preceding Grey’s arrival. And Paramount’s attempts to make star-driven dramas — such as with the recent, disappointing release “The Soloist” — usually prove to be more noble efforts than revenue-drivers.

More important, the studio is arguably better off now than when it had the benefit of DreamWorks on the lot. As the wheel of fortune has turned, the studio finds itself in the odd position of making DreamWorks’ movies.

Together with Sony, Paramount is now making Steven Spielberg’s next film, “The Adventures of Tintin,” since the now-independent DreamWorks still has not closed its financing, and could not make the film.

Paramount has been able to cherry-pick DreamWorks’ other projects, too, such as “Dinner for Schmucks” with Steve Carell, which was otherwise gathering dust.

The studio is also considerably trimmer, having come through a series of cutbacks in December. Viacom cut 7 percent of it staff in December, including 100 people from Paramount.

Whether the kick-off of "Star Trek" will be the start of a new era for Grey’s Paramount remains to be seen. After the trials of his first three years, the chairman is said to be glad to be turning a new page.

“Rebooting the studio is a long-term endeavor,” said one senior executive. “We’re in a good place, and we believe we’ve got a good slate going forward.”