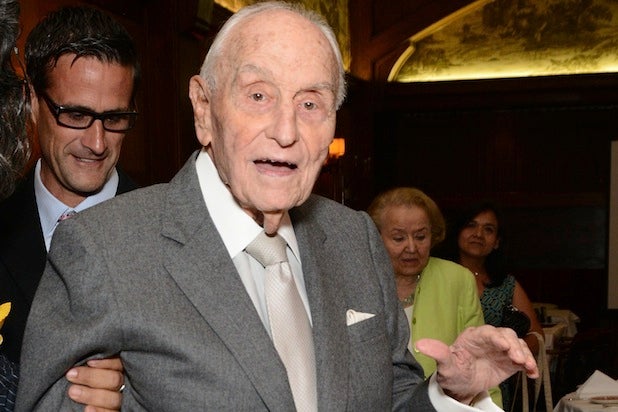 A.C. Lyles, who worked for Paramount in some capacity for more than 80 years and still kept an office on Melrose, has died, studio insiders said Monday. He was 95.

Starting at Hollywood’s archetypal bottom rung – the mailroom – Lyles worked his way up to publicity and advertising, where he toiled for decades before going on to produce both movies and television shows, nearly all of them at Paramount. Affable and gregarious, Lyles became the company’s de facto goodwill ambassador and resident expert on studio history through the years.

Born in Florida, his first official job was as an usher and page boy at the then Paramount-owned Florida Theater, where he met studio head Adolph Zukor. Lyles kept in touch with Zukor until he saved enough money to move to Los Angeles in 1938.

Zukor gave Lyles a mailroom job, though he also took on gopher duties for the studio boss, including showing studio visitors around the Melrose lot. He was promoted to publicity a couple of years later, serving in several capacities until 1957, when he got his first producing credit for James Cagney’s directorial debut, the low-budget gangster film “Short Cut to Hell.”

From there he went on to produce dozens of low-budget movies and TV series, many of them Westerns. His most recent credit was as a consulting producer on HBO’s “Deadwood.”

To: Paramount Employees
From: Brad Grey

It is with deep sadness I share the news that A.C. Lyles passed away this past Friday evening. A true institution at Paramount, A.C. was a man of great talent and elegance, and a legend in our industry.

Proud to be referred to as “Mr. Paramount,” A.C. was the longest serving employee in our studio’s history and a direct link to one of Hollywood’s most storied eras. For a remarkable 85 years, A.C. made Paramount his home, made us his family and always took a moment to share a story that reminded us just how fortunate we are to do the work that we do here.

It was often noted that A.C. had the shortest resume in Hollywood history: Paramount 1928 – 2013. He began his career at Paramount at the age of 10 distributing bumper stickers and handbills for Paramount’s Florida Theater. As a teenager, A.C. wrote a letter every Sunday for years to Adolf Zukor, founder and head of Paramount Pictures in Hollywood, until he secured a job at the studio.

It was the era of Bing Crosby, Gary Cooper, Dorothy Lamour, and Bob Hope. A.C. made friends with them all and rose quickly. By the age of 19, A.C. became Publicity Director and worked on over 70 pictures. He then moved onto producing, first as an associate producer on The Mountain, released in 1954, and then as a full producer Short Cut to Hell, released in 1957. He went on to produce nine episodes of the TV show Rawhide, and a slate of westerns for Paramount in the 1960s, through his own production company. His most recent work was as Consulting Producer on the HBO TV series Deadwood, created by David Milch.

Two years ago, when asked during an interview about the longevity of his career and continuing to serve as Paramount’s Ambassador of Good Will, A.C. said: “I can’t imagine not doing it. It’s just a great, great life.” It will be hard to imagine our lot without A.C.

Our thoughts and prayers are with A.C.’s wife, Martha, during this time.

(In lieu of flowers, his family is requesting donations be made to the MPTF Country House Fund.)