As part of a controversial experiment shortening the time movie theaters have exclusive rights to first-run films, Paramount Pictures said Tuesday that “Scouts Guide to the Zombie Apocalypse” and “Paranormal Activity: The Ghost Dimension” will debut on digital platforms beginning Dec. 8 and Dec. 15, respectively.

As part of a one-time revenue-sharing agreement with select theatrical exhibitors, the films were eligible to be released on home entertainment platforms 17 days after they dipped below 300 domestic theaters. Typically, home consumers have to wait three months after a film opens theatrically before it’s available via video on demand or streaming.

Other theaters and chains boycotted the release of the two films to protest the deal between the studio and the theater chains, which they believes poses a threat to their exclusivity and ultimately, their long-term hold on patrons. The early releases, they maintain, will cut their revenue from ticket sales.

Consumers are increasingly asking for earlier access, with some surveys indicating that a majority of moviegoers are willing to pay premiums for the privilege. The studios are anxious to respond to that interest, but must mollify the theater chains with which they work closely on film releases all year.

Exhibition sector naysayers have pointed to the box office grosses of the two films as evidence that their business can be hurt by such moves.

The $8.1 million opening of “Paranormal Activity: The Ghost Dimension” in October was the weakest of any in the lucrative but fading six-film horror franchise. Its total domestic box office since then is $18.3 million, another franchise low. 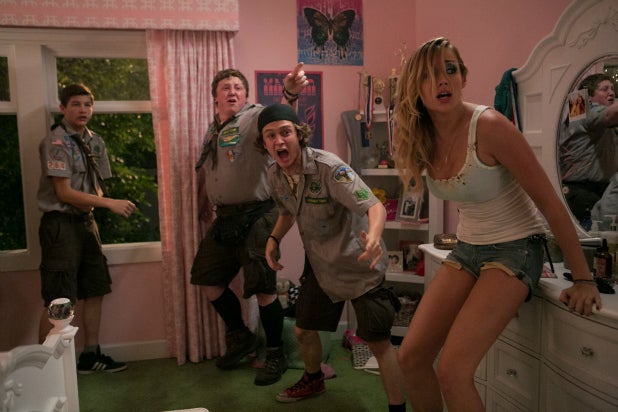 The theatrical debut of “Scouts Guide to the Zombie Apocalypse” (photo above) was dismal. It brought in $1.8 million from 1,509 theaters on its opening weekend and topped out at $7.3 million. The two low-budget films were chosen for the experiment in part because neither was expected to be a blockbuster, so there wasn’t that much theatrical revenue on the line. Horror films are typically inexpensive to make and typically front-loaded at the box office, as well.

But the boycott by the exhibitors led to weak openings by “Paranormal Activity” and “Scouts Guide.” “The Ghost Dimension” debuted in 1,656 theaters, roughly half of the number it normally would have, and early tracking had pointed to a debut in the $20 million range.

Exhibitors participating in the initiative — including AMC Theatres, Cineplex Entertainment, National Amusements, Alamo Drafthouse Cinema, Southern Theatres and Landmark Cinemas — will receive a percentage of any of the studio’s digital revenue for the period of digital availability through 90 days from the initial U.S. theatrical release, with each exhibitor’s share proportional to its theatrical gross market share.

The head of the largest U.S. movie theater chain questioned the validity of Paramount’s experiment, suggesting that its box-office rollout and returns were slashed so much that comparisons with the norm became irrelevant.

“If the video-on-demand numbers are up, is that because people wanted to see it at home, or because they couldn’t find a theater to see it in?” Regal Entertainment Group CEO Amy Miles asked after an October earnings call. Regal, Cinemark, Carmike, Marcus and Harkins theater chains refused to play either film.

Cutting back the time the theaters have movies exclusively is a hot-button issue for the exhibitors.

The four largest chains boycotted the theatrical release of “Beasts of No Nation” in October when Netflix offered it for streaming on the day the indie drama hit the multiplexes.

Last year, exhibitors also said they would boycott the release of “Crouching Tiger, Hidden Dragon 2,” when the Weinstein Company and IMAX Theaters said the sequel would be available on Netflix on the same day it debuted in theaters.

Paramount’s position on “Paranormal” was that the revenue of the films wasn’t the key to the experiment. Rather, it was to break a years-long stalemate between the studios and movie chains on shifting the date of digital releases, and also to provide data upon which the studio and its rivals could base decisions on release windows.

“We knew we were very likely to take a hit on the grosses,” Megan Colligan, Paramount’s president of worldwide marketing and distribution, told TheWrap after the “Paranormal Activity” debut.

“But we thought it was worth it to get some hard data and be transparent about it so that our exhibitors, our competitors and customers can take a look at it and render some informed decisions.”