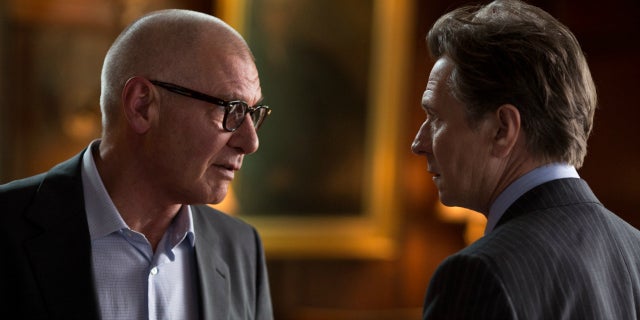 “Good artists copy; great artists steal.” That line, often attributed to Picasso, pops up in “Paranoia,” and while there’s plenty in the film that feels either copied or stolen, there’s nothing particularly good, great or even artistic about it. This lazy rehash of already-mediocre thrillers like “Eagle Eye” and “Duplicity” grinds along like a badly-told joke where both the comic and the audience can tell it’s not working, but there’s no choice but for all parties to grit their teeth and get through it.

Its twists are either predictable or improbable, and its double-crosses are so inert they’re more like crosses-and-a-half.

Gary Oldman and Harrison Ford no doubt relished the opportunity to pick up checks for doing the slightest amount of work possible, but the existence of “Paranoia” will no doubt soon be forgotten by its viewers and probably be denied by its makers.

Liam Hemsworth (“The Hunger Games”) stars as Adam, an ambitious young employee at a tech firm run by Nicholas Wyatt (Oldman). Wyatt is so unimpressed by the presentation pitch offered up by Adam and his team that he fires the lot of them; in revenge, Adam uses the corporate credit card meant for research and underwrites a boozy blowout at a trendy Manhattan night spot.

The next day, Wyatt threatens to turn Adam over to the cops unless the young up-and-comer will participate in a little corporate skullduggery: Nicholas’ associate Judith (Embeth Davidtz) will Pygmalion Adam into the perfect job candidate for a rival company, run by Wyatt’s old mentor Jock Goddard (Ford). Once inside, it’s Adam’s job to steal a prototype smartphone that Goddard’s company is developing.

Among the co-workers that Adam has to con and dazzle is Emma (Amber Heard), a marketing whiz; they shared a one-night stand after Adam’s wild night on the town, but he was too drunk to remember it. Adam and Goddard begin to bond, the FBI shows up with photos of previous Wyatt employees who were killed, and suddenly Adam doesn’t know who to trust or when he’s being monitored.

The screenplay by Barry L. Levy (“Vantage Point”) and Jason Hall, based on the novel by Joseph Finder, runneth over with information that’s introduced and never mentioned again, out-of-character bumbling at key moments and a general lack of internal logic.

Director Robert Luketic has been on the antithesis of a roll since his sprightly feature debut “Legally Blonde.” His long row of clunkers (“Win a Date With Tad Hamilton!,” “Monster-in-Law,” “21,” “The Ugly Truth” and “Killers”) just gets longer with this latest disappointment; there are a few flourishes of style, and the occasional moment where he remembers the movie is called “Paranoia” and shows Adam obsessively looking over his shoulder, but this is about as unthrilling as thrillers come.

While Heard proves it’s possible to look gorgeous and intelligent at the same time, Hemsworth can only manage a handsome blankness. Richard Dreyfuss amiably chews the scenery for a few appearances as Adam’s blue-collar dad, and if nothing else, we get two scenes where Ford (sporting a bald head) and Oldman get to go toe-to-toe.

Those fleeting moments aren’t enough to justify the rest of this snooze-fest, unfortunately. Paranoia is the sensation that others are out to get you; “Paranoia” merely provides the feeling that you’ve wasted the price of a movie ticket on a forgettable August release.