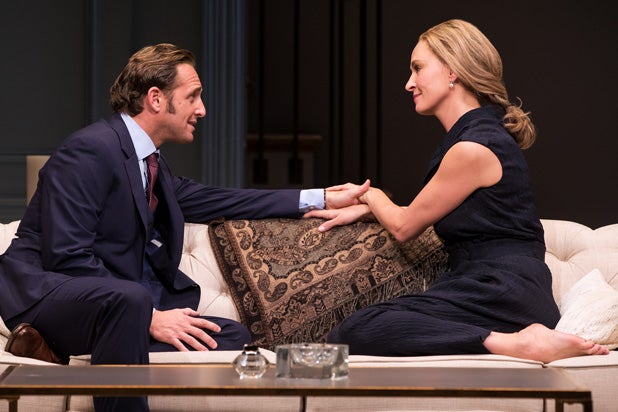 It’s odd that a four-year-old play would need an update for its Broadway premiere. But then Donald Trump got elected president of the United States.

If memory serves, “The Parisian Woman” that I reviewed at South Coast Rep in 2013 was not set in a Barack Obama-specific Washington, D.C., but rather a capital city from almost any recent era. After all, in his playwriting effort Beau Willimon (“House of Cards”) was “inspired” by an 1885 play by Henri Becque, titled “La Parisienne.”

Trump’s name is now mentioned only near the very end of this 90-minute play, but along the way we’re treated to mentions of Ivanka, Twitter mania, General Kelly, fake news, Charlottesville, and a White House under siege by a mad-man president — all of which completely overshadows the captivating tale being told on stage at the Hudson Theater, where the newly revised “Parisian Woman” had its Broadway debut Thursday.

At South Coast Rep, Dana Delany took an unusual approach to playing the title role, and in a highly stylized performance she spent more time checking out the audience than her fellow actors. With the same glamorous ease and assurance that her character seduces the D.C. elite, Delany seduced us. Few performances stick in the memory, but this truly audacious one continues to reverberate.

Pam MacKinnon directed that world premiere, and she is back at the helm on Broadway with a very different lead actress. Uma Thurman makes her Broadway debut in “The Parisian Woman,” having first appeared on the New York stage in 1999 in Classic Stage Company’s updated “Misanthrope.”

It’s not that Thurman doesn’t know what to do with her hands, in the awkward manner of some film actors who ill-advisedly act on stage. It’s that her gestures seem to be completely programmed. She’s a little less calculated with her head tilts and line readings, but the effort shows. And that’s the last thing a play about political manipulation needs.

Blair Brown and Marton Csokas fare much better. Brown brings an Ann Richards toughness to the supporting role of a high-level appointee in the new administration. Making his Broadway debut, Csokas grovels expertly as a spurned suitor. Lucas, however, attempts to make a cipher something other than a cipher, while Phillipa Soo (“Hamilton”) fades into the D.C. landscape as a possible political star whose career appears to be derailing before it even gets started.

Trump isn’t the only outside force working against the new “Parisian Woman.” As famous men are fired on a daily basis for allegations of sexual harassment, the story of a woman’s sexual misconduct is suddenly a tough sell. With the right actors, Willimon’s play might run refreshingly counter to the zeitgeist. With the current cast and script updates, this Parisian Woman” is simply out of sync.